Hogs say they're armed to the hilt 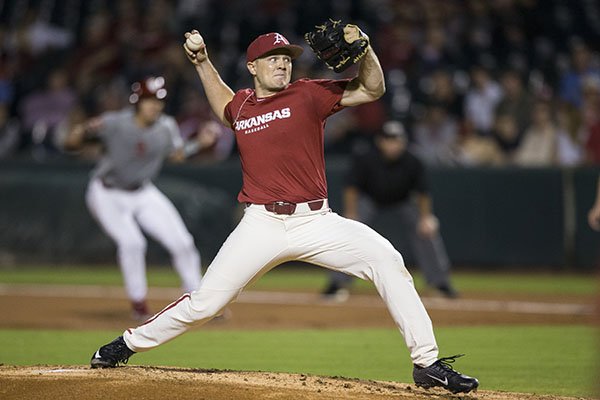 Arkansas pitcher Kevin Kopps throws during a scrimmage against Oklahoma on Friday, Sept. 20, 2019, in Fayetteville.

FAYETTEVILLE -- The University of Arkansas has produced two of the best starting pitchers in college baseball the past two years, with Blaine Knight (14-0, 2.80 ERA in 2018) and Isaiah Campbell (12-1, 2.13 in 2019) turning in back-to-back workhorse seasons to lead the Razorbacks into the College World Series.

With the defending SEC West champion Razorbacks aiming for a third consecutive trip to the CWS in Omaha, Neb., they might have assembled one of their deepest pitching staffs, even if there's not a sure-fire ace such as Knight or Campbell.

Added junior pitcher Kevin Kopps: "I would say overall this is the most talent that we've had. The other teams, maybe there was a Blaine or an Isaiah or someone like that who was exceptionally talented, but I think as a whole, [this is] the most talented."

[Video not showing up above? Click here to watch » https://www.youtube.com/watch?v=ae1qPts25h0]

"We do feel like we have some good arms and some options, but it's just going to take some time," Van Horn said.

The Razorbacks (46-20 in 2019) open the season with a three-game set against Eastern Illinois starting Feb. 14.

Right-hander Connor Noland (3-5, 4.02 ERA) and left-hander Patrick Wicklander (6-2, 4.32), a pair of sophomores who combined for 34 starts last season, are penciled in as the Razorbacks' top two starters.

[Video not showing up above? Click here to watch » https://www.youtube.com/watch?v=ewPpa9ejrz0]

"They've both looked really good so far and done really well," said Van Horn, who added he was leaning toward giving Noland the ball on opening day. "Obviously, they both want to pitch first. To me they all count the same. So it could flip around, but I'd say as of right now that's probably what you'll see right out of the gates."

Opitz said Noland and Wicklander have made strides in the offseason.

"I've definitely seen a lot more maturity," Opitz said. "They seem to be pitching a lot better, hitting more spots more often. Their stuff has gotten better. I would say they're more consistent."

The third starter and competition for midweek starts are still up in the air.

"Of course, I don't know anybody here that doesn't want to start," Kopps said.

The 6-0, 205-pound right-hander from Sugar Land, Texas, is happy to be healthy going into the season after missing 2018 with Tommy John surgery and starting off slowly last year.

"Last year when I first started going, my arm got really, really fatigued," Kopps said. "That's kind of why I missed the first week. Before, I'd throw 40 pitches and I was exhausted. Now I threw like 50 yesterday and I could have gone another 30, I think."

Van Horn and pitching coach Matt Hobbs will have plenty of contenders for the open starting spots, with right-handers Caleb Bolden, Kole Ramage, Blake Adams and others vying with Kopps. Bolden is coming off Tommy John surgery that cost him the 2019 season. Ramage (7-1, 5.25), a standout freshman in the 2018 College World Series, was second on the team in victories last year, mostly in long relief. Adams, a true freshman from Springdale Har-Ber, was the No. 1 prep player in Arkansas in 2019 as determined by Perfect Game.

The closer's role, after the departure of lefty Matt Cronin (1-0, 1.86 ERA, 12 saves), also is up for grabs with many contenders for the job.

Kopps said any number of players could land the closer's job as he singled out sophomores Elijah Trest (1-1, 7.58) and Jacob Burton (0-0, 4.82), and true freshman Mark Adamiak.

Van Horn mentioned those pitchers along with junior Zebulon Vermillion (4-1, 3.63, 1 save) and freshman left-hander Peyton Pallette from Benton as others who could close.

"I see 10 guys being able to do it," Optiz said. "We're going to have to see who steps up in the right situation, who gets that confidence going early and who we can rely on the rest of the season."

Opitz said Kopps could fill any role on the pitching staff, including closer.

"He's got the right stuff for it," Opitz said. "Whether we use him as a starter or a long relief guy or a closer, he's going to be prepared for whatever."

Van Horn has mentioned how Opitz was given a lot of pitch-calling responsibility last season, and how he's matured into one of the top defensive catchers he's ever coached. Opitz talked like a team captain Tuesday when discussing the pitching staff.

"It kind of falls on me to use them how we need to use them," Opitz said. "There's a lot of pieces. Just how we're going to put them into the puzzle yet, that's going to transpire over the season."

May 14 at Tennessee* TBA

May 15 at Tennessee* TBA

May 16 at Tennessee* TBA