Martin for 2nd dunk by Harris 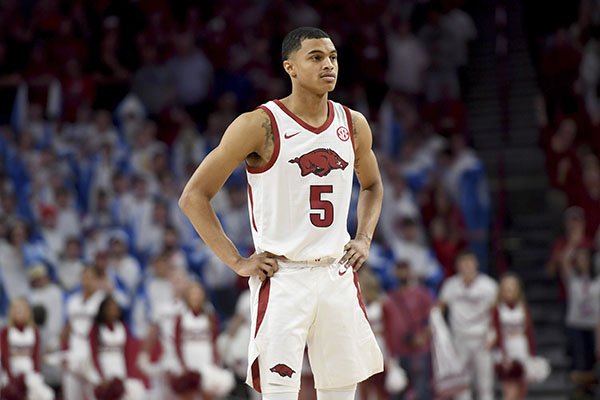 FAYETTEVILLE -- South Carolina Coach Frank Martin would like to get more production from senior forward Maik Kotsar starting tonight against the University of Arkansas in Walton Arena, and he doesn't care what prompts it, even to the point of embarrassment.

In discussing the Arkansas roster at his Monday news conference, Martin made this observation about junior guard Jalen Harris.

"I started breaking them down last night," he said. "My guy Harris, I was like, 'He's still there?' I didn't realize he was back, too. He had one of the most powerful dunks I've ever seen last year on Maik Kotsar's head in this building.

"So maybe he could dunk on him real hard again to see if he can wake up. Maik's taken a nap the last three games."

Kotsar is fourth on the team with 9.2 points per game, second with 6.2 rebounds per game and second with 29.2 minutes per game.

Arkansas Coach Eric Musselman said it's not his call whether Isaiah Joe will play against South Carolina after the sophomore guard missed Saturday's 78-67 victory over TCU with soreness in his knee.

Joe, who practiced some Monday, has been spending a lot of time with athletic trainer Mark O'Neal.

"The one thing, we don't want to rush him," Musselman said Monday night on his radio show. "I'm kind of out of the equation.

"It's really up to the player, the player's parents and the trainer. I've got about as much say as my dog, Swish, because you just don't want to tell a player, 'Hey, I think you're going to be all right.' It's not what I do."

Musselman said Joe isn't expected to be out for an extended period and that his status is day to day.

"I always think it's up to the players, their family and their inner circle, and we take a back seat," Musselman said. "Let us know when you can roll."

"Right before the second half started he came over. I didn't think that he would know what we were doing, but he looked at me and he said, 'Coach Muss, what are you going to do this third quarter? Play me straight up?' And he said, 'Good luck with that.' "

Musselman said that over the years, Bryant signed several items for his sons -- Michael and Matthew -- including his shoes when Musselman was an assistant coach for the Memphis Grizzlies.

"When he respected you, he communicated with you," Musselman said. "I asked him one night for a pair of his shoes, and I said, 'Hey, can you sign one for one son and can you sign the other for the other son.'

"There's not a lot of NBA superstars that would take the time to sign one shoe to one son and one shoe to another son. They'd just sign them, or a lot of guys wouldn't even give you the shoes and say, 'No, I need them for tomorrow night' or whatever."

Former Arkansas great Sidney Moncrief, who was honored during Saturday's victory over TCU for his induction this year in the Naismith Memorial Hall of Fame, is high on Coach Eric Musselman and complimentary of Razorback guard Jimmy Whitt.

Moncrief said his background as an NBA assistant coach gave him good insight into Musselman, a longtime NBA assistant and head coach.

"When I coached for the Dallas Mavericks, he was head coach of the Golden State Warriors," Moncrief said. "We had to match up against Golden State multiple times per year. I was always very impressed with his ability to have a game plan and to adjust. Not only during the game but also before the game.

"A very good scouter, excellent recruiter, knows the game of basketball. A motivator. They're going to continue to grow."

Moncrief also talked up the play of Whitt, who is leading the Hogs with 18.2 points per game in conference games.

"Yeah, I like Jimmy Whitt, the way he plays and competes," Moncrief said. "He can rebound, he can score. He's a very effective player."

Arkansas sophomore forward Reggie Chaney had a rough first half against TCU when he went 0 of 3 from the field, including a missed dunk.

It was Chaney's first start of the season.

"At halftime, to be honest with you, I had a discussion with myself on whether I was going to change the second-half lineup," Coach Eric Musselman said of wondering whether he should start Chaney. "But I wanted to give Reggie an opportunity to go back out there. I thought it would be too quick, and I didn't want to kill his confidence."

Chaney rewarded Musselman's confidence by going 3 of 3 from the field in the second half to finish with 6 points.

Arkansas leads the all-time series with South Carolina 20-14, including an 11-4 mark at home and a 10-4 record at Walton Arena.

The Razorbacks won the first six meetings in the series, all since both schools joined the SEC for the 1991-92 season. The Gamecocks snapped a three-game losing streak in the series with a 77-65 home win at Colonial Life Arena on Feb. 9.