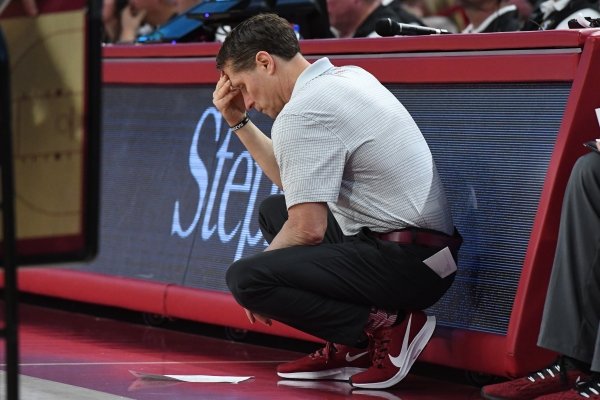 FAYETTEVILLE — There was plenty of emphasis placed on Arkansas' final possession in its 79-77 loss to South Carolina on Wednesday in Razorbacks coach Eric Musselman's postgame press conference.

With 7.5 seconds remaining and Arkansas needing a bucket to knot the score, Musselman noted a couple of times that the plan was for junior guard Mason Jones, who turned in one of his most efficient nights scoring the ball, to get an isolation in the middle of the floor with an option to create.

The Gamecocks countered Arkansas by denying Jones at the top of the key after he entered the ball to Desi Sills in the right corner. Sills then drove to the middle of the floor and found Isaiah Joe in front of the Razorbacks' bench for a contested 3 that missed short and right.

After being asked about the final sequence a number of times, Musselman wanted to shift gears to what he thought was among the biggest reasons Arkansas has now lost three in a row in SEC play and its last two league games in Bud Walton Arena.

"Having said that, we just played a team that led for 37 minutes and 43 seconds. We should also talk a little bit about what happened. Why did we not have any rhythm to start the game? Why did we not get any shots up? We could even get field goals attempted early in the game. To me, that was more (impactful) than anything."

He's certainly on the money about the Razorbacks' rough offensive start. Arkansas misfired on its first six shots from the floor and turned the ball over three times on its opening nine possessions. At the first media timeout with more than four minutes off the clock, Arkansas had yet to score.

Jones, who finished with a game-high 34 points, finally broke the scoreless stretch with a steal and layup on the other end. Still, with eight minutes to play in the first half, the Razorbacks had mustered only 12 points and looked to be on their way to one of their worst efficiency nights of the season.

According to KenPom analytics, it turned out to be Arkansas' fourth-worst game of the season in terms of offensive efficiency (94.1).

So, what was issue in the early going?

"The big, big lineup," Musselman said, referring to the three-guard, two-forward group. "We didn’t get good looks. We took a couple bad shots. We’ve got to go back to the drawing board and watch film and try to get better."

Adrio Bailey and Reggie Chaney, in the game's opening minutes, each turned the ball over, and Bailey missed a jumper. Isaiah Joe missed his first two looks from 3-point range, Jones didn't connect on his first either, and Jimmy Whitt came up empty on two jumpers.

Arkansas began the night 1 of 10 from the floor and 3 of 14 through the first 10 minutes. However, thanks to four 3-pointers in the final 10 minutes of the half, the Razorbacks found themselves down just 38-32 at the break.

In the second half, Arkansas shot 12 of 23 from the floor and hit 18 of 25 free throws, but South Carolina never trailed and held on late thanks to timely shots, just enough free throws and a costly technical assessed to the Arkansas bench with the Razorbacks down 68-66 with 5:10 remaining.

Musselman, with frustration in his voice, noted in his postgame comments that Hays Myers, whose official title is special assistant to the head coach, was responsible. South Carolina buried the ensuing two free throws, then Wilders Leveque, who was fouled by Reggie Chaney prior to the technical, hit two more, pushing the lead to six.

A video review of the moments prior to the technical shows Myers frustratedly swinging his right arm. Musselman added that he didn't believe the whistle was blown for anything that was said.

“Not happy at all," he said. "You lose by two at home in a game that has got extreme significance and a staff member gets a technical. The only person that needs to talk to the referees is me and me only.

"I don’t know what else to say. Extremely disappointed."

Wednesday's game was a lengthy one, and officials essentially took over the game in the second half, calling 40 combined fouls on the two teams - 57 in all. Ten players, five on each side, finished the game with four or more fouls. Three fouled out, two from South Carolina.

And neither team took advantage at the free throw line. Arkansas made 26 of 40 attempts, and the Gamecocks were 17 of 33. The 73 free throws were the most in an SEC game involving the Razorbacks since facing Tennessee on March 13, 2015.

"You can coach, you can gameplan, but when you leave points on the board like we did from the foul line, I don’t know what else to do but have them shoot some more foul shot reps," Musselman said.

South Carolina coach Frank Martin was very impressed with Jones, who scored 30-plus points for the third time this season. The junior made a living getting to the rim, knocking down 8 of 9 attempts inside the arc and 15 of 16 at the line.

He also added a career-high 12 rebounds, 11 on the defensive end. His seven turnovers, however, matched the most in his 53-game career.

"Mason Jones was ridiculous," Martin added. "God, is he good. I mean, I have a lot of respect for that young man."

With the loss, Arkansas is now in the midst of its most trying stretch of the season having lost three of its last four entering a challenging road game at Alabama on Saturday. The Crimson Tide have won four of their last five dating back to Jan. 15.

"I’m a team player and I love to see my teammates happy. We're all down right now, but like I told them, we’re going to get better."