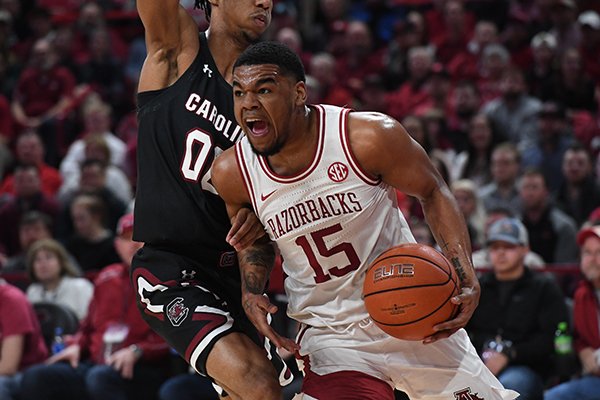 FAYETTEVILLE -- University of Arkansas guard Mason Jones took over in the second half Wednesday while posting his first double-double of the season and the second of his career.

Jones scored 26 of his 34 points in the second half in the Razorbacks' 79-77 loss to South Carolina at Walton Arena, but he did not get a touch on Arkansas' final play with seven seconds remaining.

Jones inbounded to Desi Sills, who drove right around the free-throw line with his back to the basket and passed into the left corner to Isaiah Joe, who missed a highly contested three-point try at the buzzer against A.J. Lawson.

"Mason Jones was ridiculous," South Carolina Coach Frank Martin said. "I've got a lot of respect for that guy."

The 6-5 guard from DeSoto, Texas, had the fifth 30-point game of his career.

Jones had 19 points and 10 rebounds in a victory over Florida International last season for his first career double-double.

University of Arkansas guard Isaiah Joe did not start against South Carolina, but he was the first substitute off the bench.

Joe came in for Mason Jones at the 18:12 mark as the Razorbacks were getting off to a sluggish start.

He missed his first three shots, all three-point tries, before hitting one from the left of the top of the circle. The sophomore from Fort Smith finished with 16 points on 5-of-16 shooting, including 5 of 14 from three-point range.

The officiating crew of Anthony Jordan, Owen Scott and Robert Felder called 40 fouls in the second half after whistling 17 in the opening half.

Arkansas staff member Hays Myers was called for a technical foul with 5:10 remaining in the game and the Razorbacks trailing 68-66 after a rebounding foul was whistled on Reggie Chaney.

"Not happy at all," Arkansas Coach Eric Musselman said. "You lose by two at home in a game that has extreme significance and a staff member gets a technical."

Musselman said he's the only member of the team who should talk to officials, but added he didn't think Myers was whistled for barking at the refs.

"I don't think it was what he said," Musselman said. "I think he stood up or something."

Arkansas has a pair of 79-77 losses, and both featured technical fouls. Reggie Chaney was T'd up for slapping the basketball in a loss by that score at LSU.

Arkansas guard Desi Sills was writhing in pain after he slipped on the floor in the first half, and the training staff tended to his right ankle before he limped off the floor at the 2:37 mark of the half.

Sills was taken to the locker room, treated for a sprained ankle and returned for the second half. He finished with 9 points on 2-of-6 shooting.

South Carolina guard Jair Bolden made a rare offensive play early in the second half, just as the Razorbacks had stormed back into the game.

The Gamecocks were leading 43-42 when Bolden pulled up from the right wing and made a three-point shot. Referee Anthony Jordan whistled Jalen Harris for hitting Bolden's arm, and the junior converted the four-point play to give South Carolina a 47-42 edge.

Arkansas fans were incensed midway through the second half on a foul call against Reggie Chaney.

After taking an entry pass from Isaiah Joe, Chaney missed a reverse layup and fell to the court after missing the shot. As the ball proceeded up court, Chaney -- who had not moved -- was whistled for a foul against Jalyn McCreary while lying on his back at the 11:55 mark. McCreary made 1 of 2 free throws to give the Gamecocks a 59-51 lead.

The lineup consisted of guards Jalen Harris, Mason Jones and Jimmy Whitt, and forwards Adrio Bailey and Reggie Chaney. Bailey and Whitt have started every game, while Jones has started all but one this season. Harris and Chaney were making their second consecutive starts.

The Razorbacks needed almost five minutes to get on the board. Arkansas committed turnovers on three of its first four possessions and missed its first six shots before Mason Jones stole a pass from A.J. Lawson and converted a driving layup at the 15:20 mark to cut South Carolina's lead to 6-2.

The Razorbacks never led or tied the game, and they trailed by as many as 11 points at 18-7.

The Razorbacks wore long-sleeved gray T-shirts with Kobe Bryant's No. 8 on the front and his No. 24 on the back as a tribute.

The shirts had "Razorbacks" on the back and were trimmed in Arkansas colors. Additionally, guard Jalen Harris wore a pair of Bryant shoes.

During pre-game introductions, public address announcer Johnny George asked the crowd to observe a moment of silence to honor Bryant, his daughter Gigi and the seven other people who died in a helicopter crash in California.

There were cupcakes in the media room to celebrate the birthday of Chuck Barrett, the voice of the Razorbacks.

Barrett, who has been calling Arkansas basketball games since 2010-11, turned 57.