Kept up with Jones: Gamecocks finally stop Hog in end 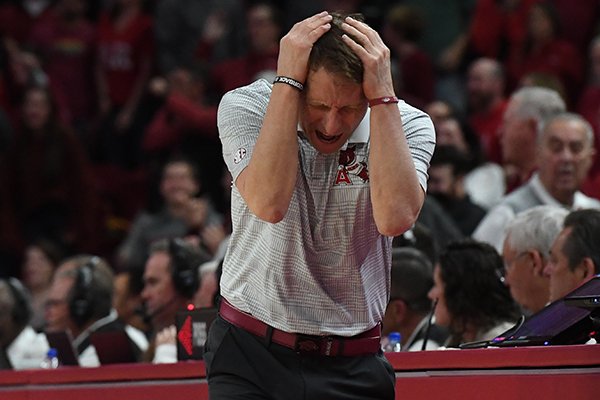 FAYETTEVILLE -- Junior guard Mason Jones led the University of Arkansas basketball team with 34 points against South Carolina, but the Razorbacks were hoping to get him a few more.

Jones was the first option to take a shot or draw a foul after he inbounded the ball to Desi Sills with 7.5 seconds left along the baseline of Arkansas' basket, but Jones never got the ball back.

Gamecocks freshman guard Trae Hannibal denied Jones the ball as he tried to break free above the middle of the three-point line.

Sills instead had to go to Isaiah Joe -- closely guarded by A.J. Lawson -- whose three-point attempt bounced off the rim as time expired and South Carolina held on to win 79-77 Wednesday night before an announced crowd of 14,085 at Walton Arena.

"We have a three-point shooter get a look to try and win the game," Razorbacks Coach Eric Musselman said. "If Mason would have caught it, we didn't have to get a three.

"We ran an isolation for him, and he has done such a good job of drawing fouls and converting. Obviously, we'll all go back and dissect that."

Jones hit 9 of 15 shots and 15 of 16 free throws, so the Razorbacks were hoping he could get to the basket and either finish or draw a foul.

"We were just running a play to get me the ball, but they played good defense," Jones said. "The South Carolina coach [Frank Martin] knew they were going to try to run a play for me, and he denied me the ball and Desi kept it and he threw it to Zay. It wasn't the best shot, but it was the best shot we could get with the time running down. So you never can be mad at that.

"Desi made the right play. He gave it to Zay. Normally Zay can make shots like that, and it just hit on the right and the game was over. It was as simple as that."

Martin said Hannibal wanted the challenge of guarding Jones on the final play.

"Trae did an unbelievable job of defending that action that they ran to get him the ball in the middle of the floor," Martin said. "So then they had to go to Joe."

"Give A.J. Lawson a lot of credit," Martin said. "He was disciplined. He didn't jump at the shot fake."

"I thought A.J. played his most complete basketball game of the year for us," Martin said.

The Gamecocks regained the lead for good 20 seconds later on Justin Minaya's three-pointer.

Although South Carolina led by as many as nine points in the second half, Arkansas continued to chip away -- pulling within 78-77 on two free throws by Jones with 28 seconds left -- but the Razorbacks could not get over the hump.

"We continued to scrap and fight, scrap and fight and made enough plays offensively," Martin said. "I thought we did a tremendous job in answering every one of their runs."

Joe, a sophomore guard, scored 16 points in 36 minutes off the bench after missing Arkansas' 78-67 victory over TCU on Saturday because of a sore right knee. He hit 5 of 16 shots, including 5 of 14 three-pointers.

"I thought he was fine," Musselman said.

Jones had a career-high 12 rebounds, 4 assists and 7 turnovers in 34 minutes.

"Obviously, seven turnovers we can't have, but he's got the ball in his hands," Musselman said. "He's a guy that makes plays for everybody. I thought he played really good."

South Carolina improved to 5-2 on the road while Arkansas fell to 12-2 in Walton Arena.

The Gamecocks got 37 points from their bench, including 12 from junior guard Jair Bolden and a career-high 11 from Hannibal. Senior center Maik Kotsar had 10 points and nine rebounds for South Carolina.

Freshman guard Jermaine Cousinard hit 1 of 2 free throws with 26.9 seconds left to give the Gamecocks a 79-77 lead.

Jones brought the ball up court, then it was knocked out of bounds by South Carolina when he tried to pass inside to Reggie Chaney. Arkansas retained possession.

"I mean, I don't know why we keep talking about one last play," Musselman said of questions about it in his postgame news conference. "Yeah [the Gamecocks] did a great job with seven seconds on the clock when we had a baseline out of bounds. They did a great job of denying Mason.

"Having said that, we just played a team that led for 37 minutes and 43 seconds. We should also talk a little bit about what happened and why did we not have any rhythm to start the game? Why did we not get any shots up?

"We couldn't even get field goals attempted early in the game. To me, that was it more than anything."

South Carolina jumped out to a 6-0 lead as Arkansas failed to score on its first nine possessions by missing six shots and having three turnovers.

"The big, big lineup," Musselman said of starting the 6-8 Chaney and 6-6 Adrio Bailey with three guards -- Jones, Jimmy Whitt and Jalen Harris. "We didn't get good looks. We took a couple bad shots. We've got to go back to the drawing board and watch film and try to get better."

Sills hit 1 of 2 free throws to pull Arkansas within 68-66, then the Gamecocks hit four consecutive free throws with 5:10 left to push their lead to 72-66.

Musselman was disappointed in his team's three-point shooting (26.9%) and free-throw shooting (65%).

"If as a team you shoot under 30% from three, you can't keep doing that," Musselman said. "I'd love to shoot threes, that's our style that we've played in the past, but it's not effective for us right now.

UP NEXT Arkansas plays Alabama at 5 p.m. Saturday in Tuscaloosa, Ala.