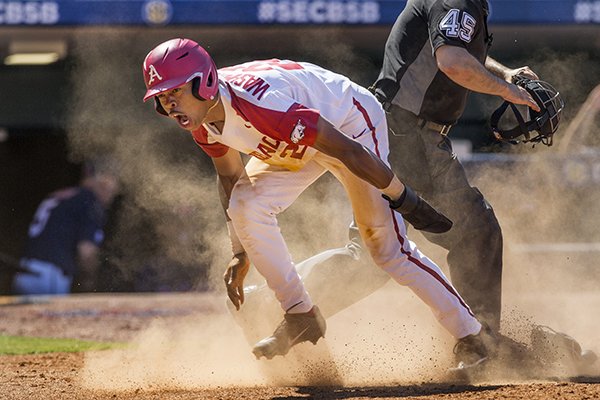 Arkansas pinch runner Curtis Washington reacts after scoring a run during an SEC Tournament game against Ole Miss on Wednesday, May 22, 2019, in Hoover, Ala.

In a post on his Twitter account, Washington stated he is transferring to Wabash Valley College, a junior college in Mount Carmel, Ill. A native of West Memphis, Washington entered the NCAA transfer portal on May 12.

“Thank you Razorback nation for the countless memories & friendships created over these past 2 years," Washington wrote. “I’ve tapped into a whole different beast & I can only get better.”

Washington played in 36 games in his two seasons with the Razorbacks, including the 2020 season that was cut short due to the covid-19 outbreak. He hit .353 with three doubles, a triple and a home run as a freshman.

Washington’s second career home run came as a pinch hitter on March 7 against South Alabama. He also scored a run after drawing a walk against Grand Canyon in what was the final game of the season.

Washington is one of seven Arkansas players who have entered the transfer portal this year. Other Razorbacks exploring a transfer include pitchers Collin Taylor and Kevin Heinrich, outfielder Trey Harris, catcher Dominic Tamez and infielder Jesse Pierce.