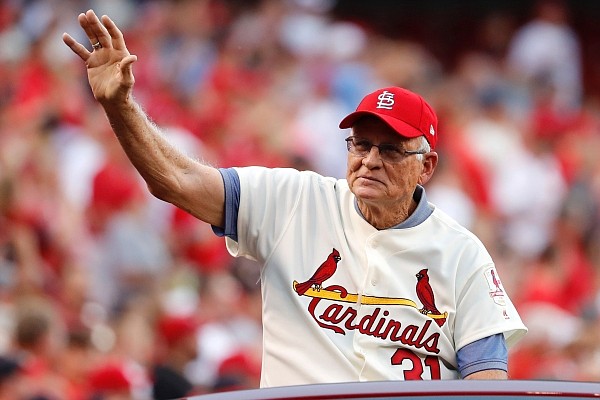 FAYETTEVILLE — In the only full season he ever played in Major League Baseball, Dick Hughes was the best pitcher for the best team in the world.

That’s quite a feat given the 1967 St. Louis Cardinals’ rotation also featured Hall of Famers Bob Gibson and Steve Carlton, and the bullpen had All-Stars Joe Hoerner and Hal Woodeshick.

Hughes was named The Sporting News’ NL rookie of the year, which was voted on by players. Baseball writers gave the award to 22-year-old Tom Seaver of the New York Mets.

Hughes was 29 at the time, but within two years he was out of baseball with a rotator cuff injury that kept him on the disabled list for much of the 1968 season.

“I did everything they told me to try to rehabilitate the arm,” Hughes told the Arkansas Gazette in 1983, “and I thought it was coming around the next spring, until I made a pickoff throw and almost fainted. I never had so much pain. I guess I tore up everything I’d built back.”

Hughes, who spent two years at the University of Arkansas before beginning his professional career, is No. 10 on the Arkansas Democrat-Gazette’s list of best Razorbacks who played in MLB.

Hughes’ big-league career was short, but his legacy is long lasting for those old enough to remember the Cardinals’ world championship in 1967. He provided St. Louis with an ace after Gibson’s leg broke midway through the season. Roberto Clemente lined a ball off Gibson’s fibula, and the injury sidelined him for nearly two months.

If not for the rotator cuff injury or his long toil in the minor leagues, Hughes might have enjoyed a long career.

The journey to MLB was long for Hughes, who was first discovered by Cardinals scout Fred Hawn as a senior at Byrd High School in Shreveport, La., in 1956. Hughes wasn’t interested in signing professionally at the time, so Hawn, who was based in Fayetteville, helped him get a scholarship to play for the Razorbacks.

“I think they had four baseball scholarships at that time — one freshman, one sophomore, one junior and one senior,” Hughes told the Gazette.

Because freshmen were ineligible, Hughes didn’t pitch for Arkansas in 1957, and he didn’t pitch much as a sophomore in 1958 because of poor weather and a low number of games.

“The only time we really played was on a swing we made through the south part of Louisiana,” Hughes told the Gazette. “So I didn’t play much college baseball.”

Hawn signed Hughes to the Cardinals for $10,000 at the conclusion of his sophomore year. From 1958-66 Hughes pitched for eight teams extending as far west as Portland, as far north as Winnipeg, and as far south as Jacksonville, Fla.

“A couple of times I heard I was getting close to being called up by St. Louis,” Hughes told the Democrat-Gazette in 2010. “When I was having a good year at Jacksonville in 1964, somebody said I’d be going up after that night’s game, but the Cardinals decided they needed a left-hander.”

In 1963, Hughes began throwing a slider, but it took a few seasons to gain control.

“I had a better-than-average fastball, and my slider was about as quick as my fastball,” Hughes told the Gazette. “My fastball ran in on a right-handed hitter; my slider ran away. It wasn’t a bad combination.”

Hughes was to begin the 1966 season with the Cardinals’ Triple-A team in Tulsa, but was optioned to the Double-A Arkansas Travelers because Tulsa’s manager didn’t want him in the rotation. In 46 innings for the Travelers that season, Hughes had a 2.35 ERA and struck out 43.

“Hughes overpowers this league,” Rapp said, Bailey recalled in 2010. “I think he’s on his way to the big leagues. You can leave him here and let him win 20 games, and that would be good for me but not for him.”

Hughes was loaned to the Yankees’ farm team in Toledo, Ohio, and in 111 innings had a 2.21 ERA and 132 strikeouts. When rosters expanded late in the 1966 season, the Cardinals called him up to St. Louis.

He earned his first win in relief, pitching three innings in a comeback victory at Pittsburgh. He struck out Clemente with a slider in the ninth inning.

He pitched through the winter in Puerto Rico and made the Cardinals’ rotation in 1967.

Hughes was great even before Gibson’s injury. On May 30 he lost a perfect-game bid in the eighth inning of a game against the Reds. He struck out 13 that day — a rookie record by a Cardinal — but suffered the loss in a 2-1 decision.

It was one of just six losses that season for Hughes, who pitched 12 complete games, including a two-hit shutout in his first career start against Atlanta. He was one of eight Cardinals who received votes for NL MVP that season, and the award was won by his teammate, first baseman Orlando Cepeda.

Needing a win to clinch the series, Hughes was on the mound for Game 6. The Cardinals were leading 2-1 in the fourth inning when Hughes gave up home runs to Carl Yastrzemski, Reggie Smith and Rico Petrocelli. It was the first time a pitcher allowed three home runs in the same World Series inning.

With Gibson on the mound, the Cardinals won the series with a 7-2 victory in Game 7 the following night. It was Gibson’s third win of the series.

Hughes, hatless and wearing his thick black glasses, made the cover of The Sporting News during the 1968 spring training, but because of the injury, he pitched only 25 times that season, mostly in relief. Hughes went 2-2 with a 3.69 ERA and four saves.

It was the Cy Young and MVP winner Gibson, with a 1.12 ERA, who carried the Cardinals back to the World Series in 1968, where they lost in seven to the Detroit Tigers.

In 2017, Hughes returned to St. Louis as part of the 50-year celebration of the Cardinals’ world championship.

“We never doubted we were good,” Hughes said that night on the Fox Sports Midwest broadcast, “and confidence spilled over to everybody. It was a great run.”