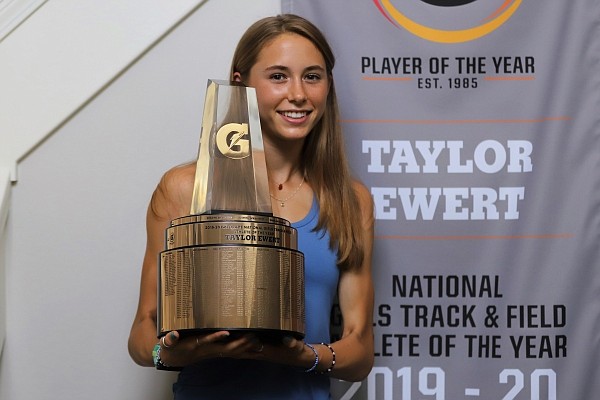 Taylor Ewert, who will be a freshman at Arkansas this fall, was named the 2019-20 Gatorade National Girls Track and Field Athlete of the Year.

Ewert, who will be a freshman at the University of Arkansas this fall, excels as both a runner and walker.

The graduate of Beaverton (Ohio) High School is so good that she was named the 2019-20 Gatorade National Girls Track and Field Athlete of the Year on Tuesday.

Ewert will run cross country and track for the Razorbacks, and she also has qualified for the U.S. Olympic Trials as a racewalker.

"I'm definitely a little bit of a unique case," Ewert said of her ability as a runner and walker. "But at the end of the day, racewalking is just another track event."

Ewert is the first Gatorade national track and field winner to sign with the Razorbacks.

"Taylor is certainly very deserving when you look at everything she accomplished in high school," Arkansas Coach Lance Harter said. "She's so versatile."

Ewert holds seven national high school and Under-20 records in the racewalk. She qualified for the U.S. Trials -- which have been rescheduled for June 2021 in Eugene, Ore., after being postponed by the coronavirus pandemic -- in the 20-kilometer racewalk after setting an American Under-20 and national high school record of 1 hour, 38 minutes and 55 seconds at the 2019 USA Track and Field Under-20 Championships.

"She has such range as a distance runner," Harter said. "She can run the mile, and she definitely can run a good 5,000. I think eventually she could run a really good 10,000. She has that endurance component."

Ewert, who also can run the steeplechase, was doing a TV interview Tuesday at her family's home when her mother surprised her with the Gatorade national trophy.

"It means a lot," Ewert said. "Not only does it represent me as an athlete, but who I am in the community with my academic achievements. I'm really grateful to be able to add my name to the list of people who have won this trophy."

"We need a healthy Taylor Ewert to be in the lineup," he said. "She's that good."

"She gets a lot of her racewalk fitness from track training," he said. "She probably trains more supplementally as a racewalker than she does as a track runner.

"Her strength and confidence comes from her track training, and then she carries that over to racewalking."

"My training is easier than some people would think," she said. "A lot of times runners do cross-training on the side. So instead of going biking or swimming, I'll go and racewalk for a certain amount of time."

"There are a lot of things I loved about Arkansas," Ewert said. "Not only does the program have a lot of history and a great legacy, but Coach Harter is such a great coach, and I really connected with him. I can see myself growing in the program."

Ewert said she began racewalking when she was 8 years old while attending a track and field camp.

She said she never considered giving up racewalking after developing into a high-level long-distance runner.

"I saw I had a lot of potential in the racewalk, and it could probably take me places," she said. "When you realize you can possibly go to the Olympics, that's not something you want to pass up."

"Taylor's been on multiple USA junior teams and has traveled to different parts of the world," Harter said. "She just has that worldly aura about her. She's a super kid and a really good student.

"She's the perfect fit for our program, and obviously we're elated she's coming to Arkansas. She's the complete package."