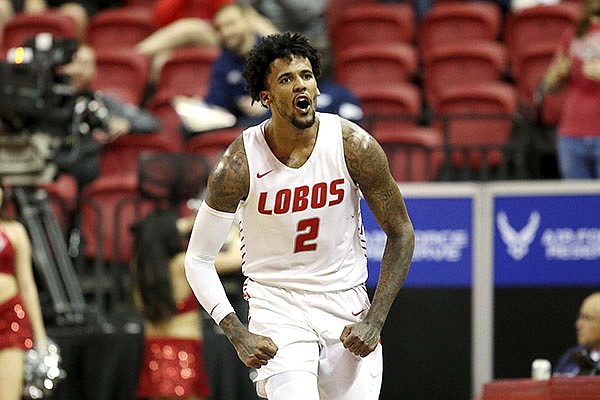 FAYETTEVILLE -- It's not a coincidence that the University of Arkansas basketball team's three senior graduate transfers all played for teams that previously faced Razorbacks Coach Eric Musselman.

The familiarity Musselman had with Justin Smith, Vance Jackson and Jalen Tate made the trio particularly attractive to Arkansas when they entered the transfer portal.

Smith, a 6-7 forward from Indiana, was limited because of four fouls when the Razorbacks beat the Hoosiers 71-64 last season, but he had 6 points and 8 rebounds in 25 minutes.

A left wrist injury sidelined Tate, a 6-6 point guard from Northern Kentucky, when the Norse lost 66-60 at Arkansas last season, but Musselman said the coaching staff watched plenty of tape on Tate to prepare in case he did play.

"I think we're really familiar with those guys," Musselman said this week on a Zoom call with reporters. "When Justin Smith got in the portal -- or Vance Jackson or Jalen Tate -- I didn't have to spend hours watching game tape. Those hours had already been done.

"I had a vision of how those guys could fit in here. I had a strong feeling of characteristics that they would bring to our team."

Musselman's familiarity with Smith, Jackson and Tate came in especially handy because of how crowded the transfer portal has been since the season ended in early March, canceled as a result of the coronavirus pandemic.

There have been 993 NCAA Division I players enter the portal, according to the website verbalcommitments.com, including 235 with immediate eligibility. The portal filled up quickly because the season for every team ended at the same time.

"I mean, names were coming like every two minutes," Musselman said. "Sometimes there were 20 names in one section of time. You just can't watch all of them. But certainly [Smith, Jackson and Tate], we had a really good feel for them as players."

Smith was the last of Arkansas' graduate transfers to commit with his announcement June 8. He was an early entry for the NBA Draft, but didn't sign with an agent.

On May 22, Smith announced he was entering the transfer portal after meeting with Indiana Coach Archie Miller and withdrawing his name from the draft.

Smith averaged 10.5 points and 5.2 rebounds last season, but his defensive ability is what excites Musselman the most.

"He's an incredible athlete," Musselman said. "When you watched him play last year, he can guard so many different people. He can guard perimeter guys, because he can move his feet. He has really good anticipation."

Musselman said Smith's skill set reminds him of a combination of forward Adrio Bailey and guard Jimmy Whitt, who were both seniors for the Razorbacks last season.

"I look at him like he's a little bit like Adrio in some degrees, but also like Jimmy Whitt," Musselman said. "That's the versatility that he has. Whoever we played, Jimmy would guard the best player for the most part unless it was the center. I think that Justin is going to take on a role defensively where he is going to have to take on a big challenge every single night that we play.

"Offensively, he's an incredible finisher in transition. He's a guy that can get out and run the wing. I also think there are some hidden areas to his game -- ball-handling and three-point shooting. We want to give him the flexibility to showcase some of those perimeter skills."

Smith started all 32 games for the Hoosiers last season and averaged a team-high 30.3 minutes per game.

"You're talking about a player that led a Big Ten program in minutes," Musselman said. "Which kind of tells you the value that Indiana [put on Smith]."

Smith has career averages of 8.3 points and 4.3 rebounds in 98 games at Indiana, including 73 starts.

"He's a proven player in arguably one of the best conferences in college basketball," Musselman said. "And he's a high, high character guy, high basketball IQ."

David Cobb of CBS Sports ranked Smith, Jackson and Tate among the top 12 on a list of the 15 best graduate transfers this year. Smith was ranked No. 6, Jackson No. 10 and Tate No. 12.

Arkansas is the only team with three players on the list. Ole Miss has two players with No. 5 Romello White, a 6-8 forward from Arizona State, and No. 8 Dimencio Vaughn, a 6-5 guard from Rider.

Jackson and Tate both signed with Arkansas on April 20 when the spring period started.

"Versatility is the first thing that comes to mind with Vance," Musselman said on signing day. "He has the ability offensively and defensively to really play four positions on the floor.

"You're talking about a player who's made 157 three-balls in his college career. He's capable of a double-double on any given night."

Tate was the Horizon League defensive player of the year last season, a third-team all-conference pick and averaged 13.9 points, 5.4 rebounds, 3.6 assists and 1.9 steals. In each of Tate's three seasons at Northern Kentucky, he was named to the Horizon League's all-defensive team.

"He's a very good rebounder for his position," Musselman said on signing day.

"That kind of shows you the size difference and the length that we have."