Best Hogs in pro baseball No. 6: King thrived until heart wasn't in it 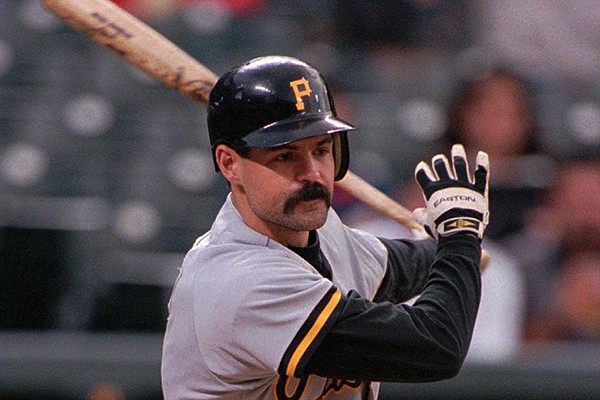 FAYETTEVILLE — When it comes to big-leaguers hitting two home runs in the same inning twice, Jeff King is a member of an exclusive club.

King, a former University of Arkansas All-American, is one of only five players to achieve the feat.

Along with King, the other players to hit two home runs in the same inning twice are Willie McCovey, Andre Dawson, Alex Rodriguez and Edwin Encarnacion.

“It’s one of those freaky statistics,” King said during a recent interview with the Arkansas Democrat-Gazette. “I guess it’s kind of cool, but it doesn’t mean a whole lot.

King played 11 seasons in the major leagues with Pittsburgh and Kansas City, recording a career batting average of .256 with 154 home runs, 222 doubles and 709 RBI.

A versatile infielder who played primarily first base, but also third and second, King is No. 6 on the Arkansas Democrat-Gazette’s list of top Razorbacks in Major League Baseball.

A back injury bothered King, but he said he retired because his heart no longer was into playing baseball. He was batting .236 with 3 home runs and 11 RBI.

“This game demands a lot, it expects a lot, and rightfully so,” King said at a news conference announcing his retirement as he fought back tears. “I’ve got a lot of respect for this game, and you’ve got to pour your heart and soul into it. And I’ve done that, but it just ain’t there anymore.

“Saying that, it’s not right for me to go out there when I’m having these kind of feelings and continue to be paid for it. Playing the game for money is not the right reason. It’s as simple as that.”

King was due $4 million for the 1999 season, so he lost about $3 million by retiring early. More than 20 years later, his feelings about it remain the same.

“I kind of felt in the winter going into the season that the gas tank was just empty,” King said. “Spring training was hard, but I kept thinking, ‘It’ll be all right. I’ll be able to fight through that.’

“I wanted to try to finish the season out, but to be honest with you, I just hit a wall. You can’t pretend. You’ve got to be all-in. When I wasn’t really able to do that, I felt like I was just going to be stealing a paycheck if I kept playing.”

King’s retirement announcement was emotional for his teammates, too, some of whom also fought back tears at the time.

“For him to walk away like this proves Jeff King is a man of integrity,” Royals catcher Mike Sweeney told reporters. “It shows he’s a man.

“He could have continued to play the next four-and-a-half months and taken a paycheck every two weeks and not had his heart in the game. But Jeff is a man of integrity. He shut it down when he thought the time was right.”

King came to Arkansas from Colorado Springs, Colo., over a scholarship offer from Baylor.

“I’ve never seen bat speed like Jeff had,” said Norm DeBriyn, the Razorbacks’ coach from 1970-2002. “I can still remember from the launch position to contact, he was so fast.”

“My whole career going back to Fayetteville, I’m more of a quiet guy and like to fly under the radar,” King said. “By my junior year, even my sophomore year, that was getting harder and harder to do.

“Everybody kept telling me how good I was.”

Pirates general manager Syd Thrift, who had the No. 1 overall pick in the 1986 draft, decided King was so good that he came to Fayetteville and watched him play at George Cole Field.

Thrift then used the No. 1 pick to select King.

“I kind of liked to go unnoticed, and that became impossible once I was a No. 1 pick,” King said. “There was a lot of pressure for me. Did that all come from me? Maybe so.”

“I remember there was a ‘Jeff King Watch’ in the local paper every day,” King said. “You can’t fly under the radar too easily when that’s happening.”

In three seasons in the minor leagues, King’s highest batting average was .277, though he showed good power by hitting 28 home runs in 1987 and 26 in 1988 playing in Class A and AA.

DeBriyn said he believes Pittsburgh gave King extra time to develop because he was a No. 1 overall pick.

“I’m not sure he ever would have gotten to the big leagues if he hadn’t been the first player picked, because when a team picks you there, it’s hard to admit they made a mistake,” DeBriyn said. “So they had patience with Jeff.

“Then when he did make it to the big leagues, he did a great job.”

King was 24 when he made his debut in 1989. He became a key player for teams that won three consecutive National League East Division titles from 1990-92 with a lineup led by Barry Bonds and Bobby Bonilla.

After Bonds and Bonilla left via free agency, King had his best seasons with the Pirates.

“Jeff could really hit,” said former St. Louis Cardinals catcher Tom Pagnozzi, who also played at Arkansas and faced King’s Pirates numerous times. “He was steady, a professional, and he went about his business. He always came to play.

“I really respected him because he knew how to drive in runs. I’m not going to name names, but if there was a guy at second base and so-and-so was hitting, I wasn’t too worried. But if there were guys in scoring position, Jeff King was the kind of hitter you worried about. He was absolutely clutch.”

After the 1996 season, in a cost-cutting move, Pittsburgh traded King along with All-Star shortstop Jay Bell to the Royals for third baseman Joe Randa and three minor-league pitchers.

“Pittsburgh was basically like Fayetteville to me,” King said. “I really enjoyed playing there. Kansas City was a good fit, too.”

But King remained hard on himself.

“I remember talking to Mike Sweeney one time and I asked, ‘What about Jeff King?’ ” DeBriyn said. “Sweeney said, ‘Jeff brings humility to another level, and I say that with all respect. He can go 2 for 4, and he beats himself up over the popup and the strikeout.’ ”

King said that looking back, he wishes he hadn’t been so hard on himself.

“I think people misunderstood me, thinking maybe I didn’t care because I didn’t throw my bat or my helmet if I made an out,” he said. “But I think my problem was maybe I cared too much.

“When you’re less than a .300 hitter, those numbers look even worse, right? That’s part of the game, but it’s hard to learn to have to deal with failure. That was always difficult for me.”

King said he was a streaky hitter.

King and his wife, Laura, live in Whitefish, Mont., a resort town of about 7,000 near Glacier National Park. They have seven children and five grandchildren.

“Whitefish is a great place,” King said. “We love it there.”

Living in Montana affords King plenty of opportunities to fish, which he also loved to do during his time at Arkansas.

“I think I knew every farm pond within a 5-mile radius of Fayetteville,” King said. “There are some great bass ponds to fish in.

“I really enjoyed my time at Arkansas baseball-wise, too.”

King and DeBriyn saw each other for the first time in more than 30 years when King was inducted into the Southwest Conference Hall of Fame in Fort Worth last November.

“It was kind of funny getting inducted into the Hall of Fame for a conference that no longer exists,” said King, who had a career .372 batting average at Arkansas. “But it was fun seeing Norm again.”

King said he hasn’t been back to Fayetteville since playing for the Razorbacks.