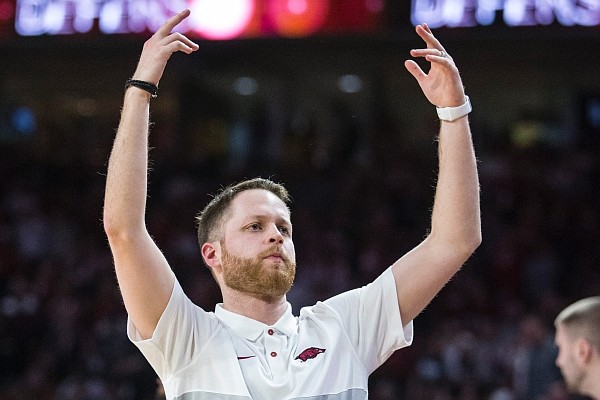 Arkansas special assistant to the head coach Hays Myers waves to the crowd in Bud Walton Arena during the Razorbacks' game against Kentucky on Saturday, Jan. 18, 2020, at Bud Walton Arena.

Myers, the special assistant to Razorbacks head coach Eric Musselman, had been to Fayetteville before. For five seasons he served as a student basketball manager at the only college he applied to: LSU.

He was fairly familiar with campus and the visitors locker room, tunnels and training room in Bud Walton Arena having visited a number of times as a Tigers support staffer. The Basketball Performance Center, though, a 66,000-square-foot facility that opened in the fall of 2015, was new to him.

The building is home to Arkansas men’s and women’s basketball and features two full-court practice gyms, weight rooms, locker rooms, coaches’ offices and a host of other amenities. And on one of its walls is a snapshot of an Arkansas-LSU game that is special to Myers.

“Muss and I are in the picture, and you can see myself behind the bench and Muss behind a referee,” he told WholeHogSports. “It was really cool to walk in and see that and think it’s almost come full circle in just a short amount of time.

A native of Dallas, Myers played an array of sports growing up, including lacrosse, soccer, football, basketball and even one season of ice hockey, according to his father, David, a lawyer in Dallas. At times, his sports schedule was so packed he would have 4-5 games on the same day in multiple sports.

He eventually grew out of soccer, and baseball was too slow. Hays Myers focused on basketball and lacrosse through middle school, and in high school he picked up football. His father, though, had a feeling he would ultimately stick with basketball in some capacity.

At Dallas Jesuit, Hays Myers was a starter on the freshman basketball team and was in good shape to make varsity as a sophomore. His shooting was a plus. Knee and ankle injuries in football, however, prevented him from landing on varsity until his senior season.

As he matured in high school, he began to fall more and more in love with the Xs and Os of basketball.

“Every nuance to every play, every defensive scheme, I just wanted to know all of it and soak it up and watch film,” Hays Myers said. “I think that was my love for it.”

The game also runs in his family. David Myers’ father, Charles, was a high school basketball coach in Louisiana and is a member of the state’s sports hall of fame. Hays Myers also has an uncle and cousin who coach in Louisiana.

He wanted to follow in his father’s footsteps, too. David Myers was a basketball manager at LSU when the program advanced to the 1981 Final Four under former coach Dale Brown. The Tigers finished 31-5 overall and 17-1 in Southeastern Conference play that season.

“(Hays) wanted to do that to be involved and pursue the coaching career,” David Myers said. “That was going to be the best way to do it. I was proud that he wanted to do it. Certainly, at your alma mater it makes it easy to follow and cheer for him.

“He was always really curious and interested in the sport and how it worked. I can remember in seventh grade and around that time - 12-13 years old - he would want to draw up plays on napkins and use salt and pepper shakers and sugar packets on the table and draw up plays. He’s been really interested in it and enthusiastic about it for a long time. He expressed some interest in coaching early on. It’s not a surprise that’s the path he followed.”

Hays Myers was a manager under two different coaches at LSU - Trent Johnson and Johnny Jones, who was a freshman on the Tigers’ Final Four team in 1981. David Myers introduced his son to Jones at the 2011 Final Four.

In his fourth of five years in Baton Rouge, Hays Myers said, he crossed paths with Musselman, hired by Jones as an associate head coach to create and foster an NBA-type atmosphere within the program. By that point, Myers had confirmed in his mind the decision to get into coaching.

He jumped at the chance to assist Musselman when the coach began his search for help in putting together scouting reports.

“I was like, ‘This is an NBA coach who wants help with scouting reports. I can kind of prove I know what I’m talking about to an extent,’” Hays Myers said. “I wanted to learn from an NBA guy and was hoping to make an impression moving forward. It may not result in anything but a good reference. It ended up being an incredible experience.

“I’m the luckiest guy in the world to have the opportunity.”

He was tasked with cutting up film and doing video edits. The two sat in Musselman’s office for multiple hours each day preparing scouting reports on LSU opponents. Toward the end of the 2014-15 season, Jones made Musselman responsible for the scouts in the team’s final stretch of games.

It was a stressful period, he recalls, but a fun one, too. Myers admitted he would sometimes not go to all of his scheduled classes because he wanted to spend more time in the office.

“I learned a ton,” he said. “I was able to build that relationship and prove to him that I worked hard and had some sort of basketball savvy.”

After one year at LSU, Musselman accepted the head coaching job at Nevada. Meanwhile, Myers remained at LSU to complete his degree. In his final season with the Tigers, he was able to spend time with and around 6-10 freshman sensation Ben Simmons, the eventual No. 1 overall pick in the 2016 NBA Draft.

Once Hays Myers’ time in Baton Rouge was complete, it was time to start job hunting. David Myers advised his son to begin sending his resume to anyone he knew. He called Musselman to ask if he could list him as a reference. Less than an hour later, Hays Myers said, he received a text from Musselman.

He called his father to ask what he thought of the offer.

“I said, ‘Absolutely. That’s a great opportunity,’” David Myers remembers saying. “I don’t know if I used the word stupid, but (I said) you’d be dumb not to do it.”

Hays Myers said he was stunned by Musselman’s message. They communicated by text on occasion in their first year apart, but he never anticipated a job offer from Musselman immediately out of college.

“It was a big, scary jump, but to know Coach Muss was there, I felt like it was the right spot and somewhere I could grow,” he said. “When I got there, unequivocally, it was the best decision I’d made by far. Being able to rise up within his staff has been a lot of fun.”

Myers spent three seasons at Nevada, one as a graduate assistant and two as director of player development. The latter position was a challenge for him at times given the Wolf Pack did not have a practice gym until his final season in Reno.

Sometimes, he said, the team practiced at Boys and Girls Clubs and players had to find ways to get development work in using only the two baskets in the team’s arena. As a GA, he remembers getting in the gym with Nevada forward Jordan Caroline as late as 11:30 p.m.

Now at Arkansas, Myers says his current role as special assistant to Musselman is similar in a way to his player development position with the Wolf Pack. A majority of his job revolves around video. But he also assists Michael Musselman and Pat Ackerman with the Razorbacks’ recruiting efforts and helps GAs and the coaching staff create player development plans.

And then there is the analytics aspect of the job. At Nevada, Musselman approached Myers about studying analytics, and after reading Dean Oliver’s book “Basketball On Paper,” his interest in the math behind the game grew.

Musselman trusts Myers’ basketball acumen and appreciates that he pushes to learn from others often.

“He does a lot of projects that people wouldn't know about,” Musselman said. “We're doing a summer book of goals for our players and he's taken the lead on that. He and I go through a lot of the presentations that we do on Zoom. He and Clay Moser kind of head up our little analytics that we do with guys.

“When I need to bounce an idea off somebody or want to talk about pick-and-roll coverage, I’ll go talk to Hays and throw things by him. He’s a guy who loves to study film. Those guys who are like film-aholics, they bring so much to the table.”

David Myers is thrilled to see his son following his dream and passion, and he is proud of his work ethic and determination. Although he is an LSU guy at heart, he has no issues cheering for Arkansas basketball.

The family has no problem sporting Razorbacks gear, either.

“It’s been really exciting to see it,” David Myers said. “They had good teams at Nevada and he’s learning a ton from Muss. We’re really proud of him.

“Sometimes I pinch myself when I see him down there on the floor actually being involved at that level and doing what he’s doing at his age.”