New UA assistant contract for 2 years, up to $1 million 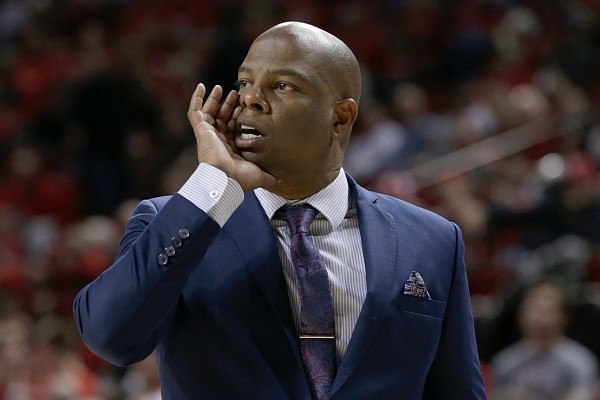 FAYETTEVILLE — New University of Arkansas assistant basketball coach David Patrick is guaranteed $1 million in total financial compensation if he stays on the job for two seasons.

Patrick, who was head coach at California-Riverside the previous two seasons, has a two-year contract at Arkansas with an annual financial package of $400,000. His contract also includes a $200,000 retention bonus if he remains employed by Arkansas through the end of the 2021-22 season, including all tournament games.

The Arkansas Democrat-Gazette on Monday obtained a copy of Patrick’s contract from the UA in response to a Freedom of Information request.

Patrick had an annual salary of $261,000 at UC-Riverside according to the Riverside Press-Enterprise.

According to his Arkansas contract, Patrick has the title of associate head coach and a base salary of $360,000, with an additional $40,000. The total $400,00 will be paid by the athletic department.

Patrick is replacing Chris Crutchfield, who had an annual compensation agreement of $360,000, but the basketball program reallocated other funding to stay within its existing budget.

Musselman and Patrick first met in 2008 when Musselman was between coaching jobs and was a college basketball radio analyst for Fox Sports and Patrick was an assistant coach at Saint Mary’s College.

The two became friends and worked together as LSU assistant coaches during the 2014-25 before Musselman became Nevada’s head coach.

Patrick led UC-Riverside to a 27-38 record in two seasons.

The Highlanders improved to 17-15 last season after going 10-23 in Patrick’s first season.

Last season was the second time in 19 years since UC-Riverside moved up from NCAA Division II to Division I status for the 2001-02 season that the Highlanders finished with a winning record. They were 17-13 during the 2008-09 season under Coach Jim Woolridge.

Patrick came to UC-Riverside from TCU, where he was an assistant coach the previous two seasons.