UNDER THE RADAR: Salem’s Tyler Siddons 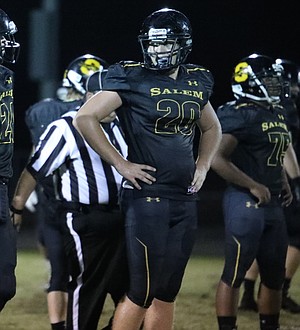 On Wednesdays, we feature an in-state prospect who could be flying under the radar of college coaches. This week's UTR prospect is Salem’s Tyler Siddons.

“He just has a nasty streak in him when he’s blocking. Receiving-wise, he has some work to do there, but we’ve been a power-running team past two years, and he’s helped paved the way for a 2,000-yard rusher last year. He was just a sophomore and we were running the ball 40-50 times a game. I can see him turning into a tackle on the college level.”

Watson on how Siddons flourished during the second half of last season:

“This past year is his first year of varsity action. Halfway through the season, something just clicked. He battled through a broken hand. He played with a broken hand all through the playoffs. He’s just a tough kid. He moves fairly well straight ahead. Footwork could be a little better and that’s something we’re working on. He’ll get a lot of work on that the next couple of years. He’s still slender. He doesn’t look 248. He definitely has the frame to add weight.”