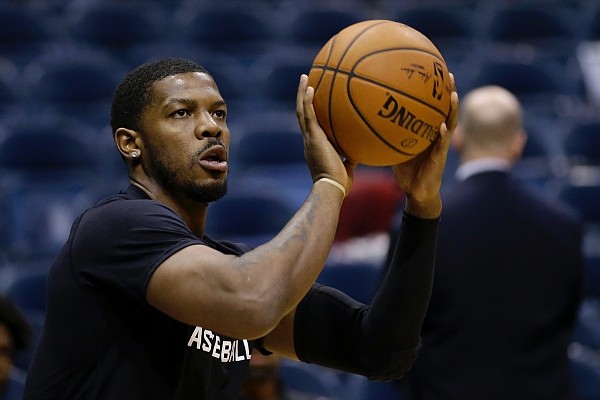 Joe Johnson, playing for Overseas Elite in The Basketball Tournament in 2020, played at Arkansas from 1999-2001 and was a first-round pick of the Boston Celtics in the 2001 NBA Draft. (AP Photo/Aaron Gash)

Joe Johnson wound up on the winning side of a matchup featuring a pair of former Razorbacks on Thursday in The Basketball Tournament, a $1 million winner-take-all event in Columbus, Ohio.

Johnson, playing for four-time tournament champion Overseas Elite, scored 13 points on 6 of 9 shooting and finished with five rebounds and four assists in his team’s 76-70 Round of 16 win over Armored Athlete, which was led by Coty Clarke.

“I thought it was great,” Johnson said after the win. “I enjoyed it, man. It was good to get out of the (hotel) room and finally get a chance to get out on the court with these guys. It was fun.

Making his debut for Overseas Elite, Johnson scored 10 of his 13 points in the first half on 5 of 6 from the floor. He also added four assists and three rebounds before halftime.

Johnson, who played for the Razorbacks from 1999-2001 before being selected by the Boston Celtics in the first round of the 2001 NBA Draft, scored or assisted on Overseas Elite’s first 10 points of the game. He knocked down 3 of 5 midrange jumpshots and one 3-pointer, which came from the left wing on a baseline out of bounds play.

Clarke, who played at Arkansas from 2012-14, starred for Armored Athlete, finishing with a team-high 20 points on 7 of 12 shooting - 3 of 8 from 3-point range. He added eight rebounds, two steals and an assist as well.

In the first game on Thursday, former Razorbacks forward Jacorey Williams, who transferred to Middle Tennessee after three seasons at Arkansas, led Marshall alumni team Herd That to a thrilling 102-99 win over The Money Team.

Williams scored 30 points on 10 of 15 shooting and grabbed six rebounds in 23-plus minutes. He drew nine fouls and made 10 of 13 free throws in the win.

“We knew it was going to be a game of runs,” said Williams, whose team overcame an 18-point deficit. “Everybody kept playing with confidence. We trust each other. We just kept playing. We never panicked.”

Overseas Elite and Herd That will meet July 11 at 1 p.m. on ESPN.