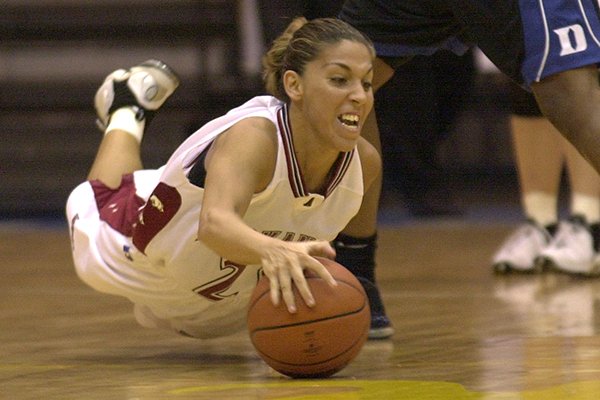 India Lewis’ smile lit up a room possibly better than her jump shot.

And she had a pretty sweet jump shot.

Lewis, who died at the age of 36 of breast cancer in 2018, electrified crowds around the state while playing in high school for Siloam Springs, then later around the country at the University of Arkansas.

She was a standout multi-sport athlete for the Lady Panthers, starring in not only basketball but also volleyball and softball. Lewis averaged more than 27 points per game, four assists and six steals in leading Siloam Springs to a state basketball championship as a senior in 1999.

She was named the state’s Miss Basketball by the Arkansas Democrat-Gazette, but basketball wasn’t her only game. Lewis hit .595 with 23 RBIs in softball and went out for volleyball her senior year and earned all-state tournament honors. That led to her being honored as the Democrat-Gazette’s Female Athlete of the Year.

“She loved people and had the ability to get everyone around her to rise up to her level,” Sharp said. “She had probably the biggest heart. She had that charisma and that knack of leading teammates that you kinda only dream about.

“India had that charm on and off the floor. People just loved her and enjoyed being around her. She was funny, made people laugh and just enjoyed life.”

Sharp joked it was hard even for opponents to root against her.

“They respected her and enjoyed watching her do her thing on the court even to the demise of their own team.”

She played larger than life at only 5-foot-6 and Sharp heard about Lewis even before ever seeing her play.

Lewis At a Glance

CREDENTIALS Was a multi-sport star at Siloam Springs and helped lead the Lady Panthers basketball team to a state championship as a senior. … Went on to play basketball at the University of Arkansas and overseas for a time before returning to Siloam Springs. … Was the team’s second-leading scorer each of her last two seasons at Arkansas, helping the Razorbacks to the NCAA Tournament in three of her four seasons. … Died Aug. 7, 2018 at the age of 36 after a battle with breast cancer. … Earned Arkansas Democrat-Gazette’s Miss Basketball in 1999, after averaging 27 points, four assists, three rebounds and six steals per contest. … Named the ADG’s Female Athlete of the Year for 1999. … Helped the Lady Panthers reach the state semifinals in volleyball her senior year and participated in track and field.

QUOTABLE “She had probably the biggest heart. She had that charisma and knack for leading teammates you kinda only dream about and she was a fierce competitor," said former Siloam Springs coach Debbie Sharp.

“We didn’t have a pee-wee program back then, but I heard about her reputation of her charisma she had on the court even at a young age.”

Current Arkansas women’s basketball coach Mike Neighbors has plenty of memories of Lewis. He was on the Razorbacks coaching staff when Lewis played there, but that wasn’t Neighbors’ first experience of seeing her play.

He was the girls’ coach at Bentonville High School when she first crossed his path. Neighbors watched Lewis register a truly incredible feat at any level of basketball — a quintuple-double. And she did it as a ninth-grader.

Lewis reached double digits in points, rebounds, steals, blocked shots and assists in the same game. Those numbers can’t be embellished since Neighbors was doing the stats himself.

“We were hosting the (junior high) regional at our gym in Bentonville,” Neighbors said. “She did that in 21 minutes of game time. I had heard about this kid, but that was my first chance to see her. She put on a show.

“I think I ended up giving the stat sheet to her parents. Anybody want to argue about the stats? Bring it. It was one of the most unbelievable performances I’ve ever seen.”

He also got the opportunity to see Lewis as his opponent several times in her high school years and that didn’t work out too well.

“We played them in the finals of the county tournament about every year,” Neighbors said. “We had a 98-88 game in regulation time. She had 38.”

“I remember telling our kids ‘Pick her up at half court,’” Early said. “But also remember thinking at times ‘We can’t stop this kid.’ It was impressive physically what she was able to do at her size and the way she thrived in the SEC.

“She did a lot to draw attention to the girls’ game. When you can shoot a 3-pointer like she could, it was like a dunk for us. She just had that fearless confidence and she played the game always with a smile on her face.”

“The whole world had us as state champs,” Sharp said. “But I knew Alma was gonna bring it. It was almost a sense of relief when it was over.”

Lewis poured in a game-high 32 points in the 77-70 win, but she was an uncharacteristic 0-of-8 from beyond the 3-point line. However, she was clutch from the free-throw line, making 14-of-14.

She played the last half of the season despite a nagging thumb injury suffered in the Lady Panthers’ lone loss of the season in the finals of the Bryant Holiday Tournament, Sharp said.

“She missed the whole second half of that game in the Bryant tournament and she had surgery on it before she went to Arkansas,” Sharp said. “Nobody really knew how bad it was. But that’s the type of competitor she was.

“She just touched so many people’s lives. It was just a joy to watch her do what she was born to do it seems like.”