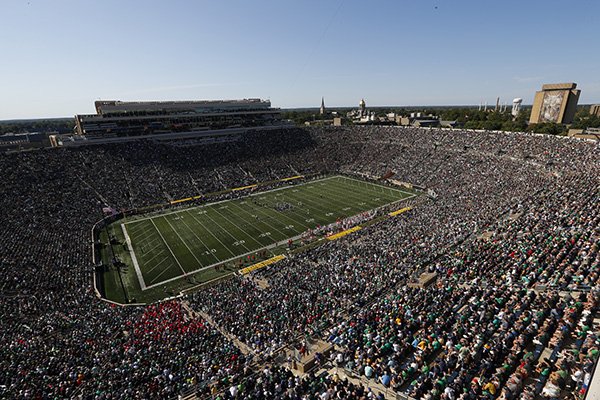 FAYETTEVILLE — If not for the coronavirus pandemic that has put the 2020 college football season in peril, University of Arkansas football fans would be stoked for Week 2.

The Razorbacks, aiming to rebound under first-year Coach Sam Pittman from a dreadful three-year funk, are scheduled to play Notre Dame for the first time Sept. 12.

Events from last week began to cast doubt on whether that game will be played, as reports were brewing that the Atlantic Coast Conference — with which the independent Notre Dame is affiliated with on a scheduling basis — might follow the Big Ten and Pac-12 in planning for a conference-only football schedule this fall.

The SEC is scheduled to have in-person meetings with league athletic directors on Monday, sources told the Arkansas Democrat-Gazette, at the SEC office in Birmingham, Ala., to discuss the fall season in football and other matters. No firm decisions are expected from the meeting.

SEC Commissioner Greg Sankey said this on Thursday: “The Southeastern Conference will continue to meet regularly with our campus leaders in the coming weeks, guided by medical advisers, to make the important decisions necessary to determine the best path forward related to the SEC fall sports. We recognize the challenges ahead and know the well-being of our student-athletes, coaches, staff and fans must remain at the forefront of those decisions.”

“It has grown more pessimistic over the past two weeks, but I’m not to a point to say we shouldn’t continue to plan for the potential to open on time,” Swarbrick said. “I just think it’s less likely. We have to shift our allocations a little bit — a little more time on planning the alternatives, and a little less time on planning routine go-forward.”

The Fighting Irish are scheduled to open with a road game at Navy on Labor Day weekend, a game that was originally planned for Dublin, Ireland, on Aug. 29 before being scuttled due to the pandemic.

While Arkansas’ ranking in the best college football programs of all time is debatable, the Fighting Irish are solidly in the top five. In rankings compiled by ESPN last summer as part of its tribute to 150 years of college football, Notre Dame ranked No. 2 (behind Alabama), while Arkansas was No. 44. Programs such as Harvard, Yale, North Dakota State, Grambling, Wisconsin-Whitewater, Linfield and Dartmouth listed ahead of the Razorbacks.

The Arkansas-Notre Dame home-and-home series was scheduled pretty soon after Michigan dropped a two-game series with the Razorbacks in the summer of 2016 for a buyout cost of $2 million so that the Wolverines could get Notre Dame back on their schedule.

The Razorbacks were scheduled to play at the “Big House” at Michigan in 2018, and the Wolverines were contracted to play the return game at Reynolds Razorback Stadium in 2019.

Then-Arkansas athletic director Jeff Long scrambled to find a marquee game to fill in for the Michigan series. However, an already difficult job of scheduling at Arkansas was harder with less than a two-year window to replace the game.

“I’d prefer to have a home-and-home around a Power 5 opponent,” Long told the Arkansas Democrat-Gazette at the time. “That’s what we’ve built our schedule around going forward, so that makes it unfortunate. It’ll be extremely difficult at this late date, unless some schools decide that they need to rearrange their schedules and maybe it’ll work for us.”

The Razorbacks wound up adding a road game at Colorado State in 2018 after already having a contract for a 2019 home game against the Rams.

Long called the $2 million buyout from Michigan a small consolation.

“It’s going to be far more difficult than $2 million worth of pain to get a Power 5 scheduled,” Long told the Arkansas Democrat-Gazette. “At the time we signed it, the thinking was from [then-Michigan AD] Dave Brandon that they don’t break contracts. I didn’t anticipate them breaking a contract.

“And $2 million was certainly a sizable amount at that time and it’s still a sizable amount, and we can put that money to good use, but it’s really not going to help us find a solution to the home-and-home with a Power 5 opponent.”

The Razorbacks, hitting a lull at the end of the Bret Bielema era and the whole of Chad Morris’ tenure, wound up struggling with Colorado State.

Arkansas blew a 27-9 third-quarter lead in the 2018 game in Fort Collins, Colo., allowing the Rams to score 25 unanswered points in a 34-27 loss that touched off a six-game losing streak.

The Razorbacks and Rams engaged in a high-scoring affair last season. Colorado State tied the game at 34-34 late in the third quarter before Arkansas pulled away for a 55-34 victory on Sept. 14. The Rams had to go with backup quarterback Patrick O’Brien after starter Collin Hill’s knee injury.

That wound up being the final victory for Morris at Arkansas, as the Hogs were upset 31-24 by San Jose State the next week to kick off a nine-game losing streak.