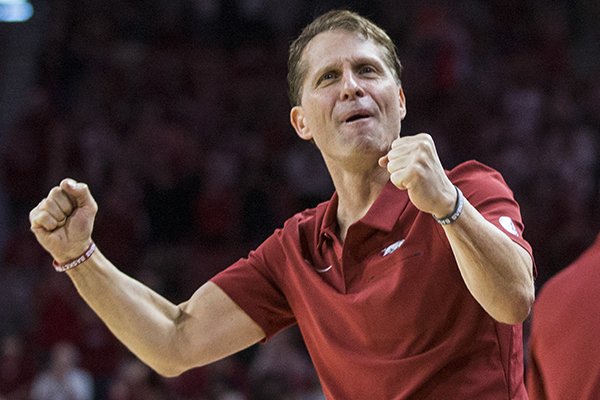 "I talk to Coach Muss and talk to a lot of the assistant coaches as well," Holmes said. "They're in contact a lot. Which I think is pretty cool. They do stay on top of their recruits when they recruit them.

Holmes, 6-9, 205 pounds, played last season at Goodyear (Ariz.) Millennium, but he will play his senior season at Montverde Academy in Florida.

He received a scholarship offer from the Hogs on April 30. He also has offers from UCLA, LSU, Virginia, Arizona State, Arizona, Ole Miss, Southern Cal, Texas Tech and others.

He said the Razorbacks are strong in their pursuit of him.

"A little bit more aggressive, which is good," Holmes said. "They'll call to check up more often than some other programs will. I think it's pretty cool. It just shows they care, which is nice.

"I talk to Coach Muss the most. I have great talks with him. He just calls and checks up."

Holmes was named the Arizona Gatorade Player of the Year after averaging 23.5 points, 10.5 rebounds and 3.8 blocks a game as a junior while leading his team to a 24-6 record.

ESPN national recruiting director Paul Biancardi also rates Holmes the No. 10 power forward and No. 45 overall prospect for the 2021 class.

"Holmes continues to improve his body, while his strength offensively is his face-up game," Biancardi said. "He's best in the mid-post and from the mid-range areas. Rebounds well, while his frame, hands and footwork allow him to be even more effective inside. Upside is in his versatility."

"I don't think he really ever gets tired," Holmes said. "I just think it's really cool."

Musselman is known to be detail-oriented, and Holmes picked up on that when he realized Musselman was watching all available video of Holmes' games.

"For a college basketball coach to sit down and actually watch a full-game highlight of a recruit, I think it's unlikely and Coach Muss has actually done that," Holmes said. "He's watched the video of some of the games I've played even if it's just an All-Star camp, which I think it's crazy but I think that just shows how detailed he is.

"I've received his feedback after one of the games. After he did that, it just showed me like, wow, he's really detailed."

His father played basketball with Donovan McNabb and Antoine Walker at Mount Carmel High School in Chicago, earning some Division II offers before choosing to focus on academics at Notre Dame instead. Holmes said his father is also steadfast on details.

"He's really a critical thinker," Holmes said. "He's really detail-oriented. So all the little mistakes I make, he points out."

Holmes credits his parents and coaches for helping him accept hard coaching.

"Luckily enough, my coach I had at Millennium and my club coaches were really hard on me, so that really helped to shape me into the person I am today," Holmes said. "I think it's really crucial to be able to except criticism. I feel like that's helped me out."

Holmes has a 3.5 grade-point average. He's sorting through possible majors in college.

"I maybe want to go ... into sports management and be a head coach on the collegiate level, but if not, I want to do something with public speaking," he said.