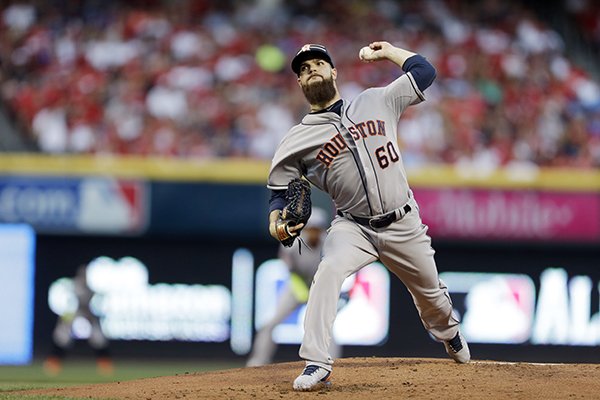 Former Razorback All-American Todd Day scored a game-high 35 points and was named the Legends in the Rock MVP after leading his West team to a 140-137 victory over the East at Alltel Arena in North Little Rock.

Day made 10 three-pointers, including two in the final 1:10, and scored 23 points in the second half.

Houston pitcher Dallas Keuchel was the starter for the American League at the All-Star Game in Cincinnati. Keuchel allowed 1 unearned run, 2 hits and had 1 strikeout in 2 innings in the American League’s 6-3 victory over the National League.

The tournament — named after the Arkansas tight end who died Nov. 20, 2011, from a previously undetected enlarged heart — raised money for the Garrett Uekman Foundation, a nonprofit organization designed to raise money for heart-disease research and education, and to fund scholarships for deserving athletes.

Dick Booth, a field events coach for the Arkansas track and field team for 27 years over two stints, was hired as an assistant coach at Florida.

Arkansas men’s Coach Chris Bucknam announced that he was not retaining Booth, who served 26 years under former UA coach John McDonnell and one year under Bucknam.

During his time at Arkansas, Booth coached athletes to 45 individual national championships and 137 All-American honors. He also coached 11 Olympians.

Eric Hinske, an infielder at Arkansas, went 4 for 4 and hit a game-winning home run after connecting for a tie-breaking home run in the seventh to lead the Toronto Blue Jays to a 6-5 victory over Boston.

Hinske homered off Tim Wakefield in the seventh, and hit his 16th home run on closer Ugueth Urbina’s first pitch in the ninth.

The racy description got extended play in Arkansas.

Fifteen years after former Arkansas golfer John Daly won the British Open in 1995, he shot a first-round 66 at the Old Course in St. Andrews, Scotland, to tie for second place. It matched his best-ever round at the British Open.

“When you have so many ups and downs in life, like everybody does, some smaller and bigger, it makes it so much more gratifying when you do something special,” Daly said.

Daly struggled the rest of the tournament, shooting 76, 74 and 73 the next three rounds to tie for 46th.

Cleveland Indians ace Cliff Lee, a former Razorback, started for the American League in the All-Star Game at Yankee Stadium and pitched two scoreless innings in his team’s 4-3 victory in 15 innings.

Daniel Lincoln, a three-time NCAA champion for Arkansas in the 3,000-meter steeplechase, won the event at the U.S. Olympic Trials in Sacramento, Calif.

Lincoln pulled away on the final two laps and won in 8 minutes, 15.02 seconds to qualify for the Olympics in Athens, Greece.

Ronnie Brewer, a former All-SEC guard for the Razorbacks, signed as a free agent with the Chicago Bulls. He finished the 2009-10 season season with Memphis after being traded from Utah.

Brewer turned down a chance to go to the Boston Celtics in a sign-and-trade deal so he could sign a three-year contract with Chicago worth $12.5 million.

Lewis is now a standout on the LPGA Tour.

Former Arkansas All-American Deena Drossin Kastor won the 10,000 meters at the U.S. Olympic Trials in Sacramento, Calif. She broke her own Trials’ record with a time of 31 minutes, 9.65 seconds. The time was 42 seconds faster than she ran in winning the 10,000 at the 2000 Trials.

After her victory, Kastor said she would skip the 10,000 at the Olympics in Athens, Greece, to focus on the marathon.

Her decision paid off when she finished third in the marathon to win the bronze medal.

Former Arkansas golfer Taylor Moore ran away from the field to win the Staal Foundation Open in Thunder Bay, Ontario, and earn a berth in his first PGA Tour event at the RBC Canadian Open.

Moore, who led the Razorbacks to a 12th-place finish at the NCAA championships earlier in 2016, won in his fifth start on Canada’s Mackenzie PGA Tour. He shot a 6-under final round of 66 at Whitewater Golf Club to win by three strokes and take the winner’s prize of $31,500.

“It’s a little bit surreal,” said Moore, who finished with an 18-under 270. “I don’t really want time to reflect on it. I just want to keep it going, play golf and have some fun.”

Bret Bielema made his debut at SEC media days after surprising many in college football by resigning from his position at Wisconsin, where he had won three consecutive Big Ten titles.

Coach Houston Nutt announced his brother, Danny, was stepping down as the team’s running backs coach due to medical complications that included recurring bleeding in his brain stem.

“It’s about having a good life,” Houston Nutt said. “You want to get back to the point where you aren’t dizzy, aren’t having headaches and concerned about whether or not you’re going to make it to the next drill or the next practice.”

Medical problems persisted for Danny Nutt after he initially underwent brain surgery in 1998.

Former All-American Melvin Lister won the triple jump at the U.S. Olympic Trials with a world-leading leap of 58 feet, 4 inches on his final attempt in Sacramento, Calif.

It was the best triple jump in the world since 2002, and the best jump by an American since Kenny Harrison won gold at the 1996 Olympics with 59-41/4. It also qualified Lister for the Olympics in Athens, Greece.

Lister’s jump broke the Trials record set by former Razorback Mike Conley at 58-01/4 in 1992. He won five NCAA championships at Arkansas — two in the long jump and three in the triple jump.

Former Razorback offensive guard Mitch Petrus died at age 32 in North Little Rock after passing out from heat-related issues while working outside in his family’s shop in Lonoke County.

Petrus, a former walk-on tight end, played fullback before winning a starting role at offensive guard, where he earned All-SEC honors in 2009. After making waves at the NFL Scouting Combine with 45 reps of 225 pounds on the bench press, Petrus was taken in the fifth round of the 2010 NFL Draft by the New York Giants.

Petrus earned a Super Bowl ring with the Giants after the 2011 season. He finished up his three-year career with the Patriots and the Titans in 2012.

“He was just a fun personality to be around,” said former Razorback David Bazzel, who helped guide Petrus into the media fraternity in Central Arkansas. “I think he would have kept doing more TV and probably kept his farm.”

John L. Smith made his only appearance at SEC media days as interim coach for the Razorbacks. Smith, who posted a 4-8 record in 2012, previously had been on staff under Bobby Petrino as special-teams coordinator and as a defensive assistant. He left his alma mater Weber State to return to Arkansas after Petrino was fired.

The Razorbacks opened the year ranked No. 8 and defeated Jacksonville State before falling in a 34-31 upset in overtime to Louisiana-Monroe. The season fell apart in the following weeks.

Tim Horton, a receiver and punt returner on Arkansas’ Southwest Conference championship teams in 1988 and 1989, was hired as the Razorbacks running backs coach.

Horton replaced Danny Nutt, who stepped down due to medical reasons.

“Obviously, to come at this time of year and under these circumstances is less than ideal,” Horton said. “With Danny Nutt’s health being like it is, and him being a friend, there are things more important than football out there.

“I hate to come under those circumstances, but really, really happy to be back here. I’m looking forward to a great season with the Razorbacks.”

Horton came to Arkansas from the Air Force Academy, where he was the offensive coordinator.

Cliff Lee was credited with his first career complete game, even though the former Razorback pitched only five innings in Cleveland’s 6-2 victory over Kansas City.

The game was called with one out in the bottom of the fifth inning after two rain delays.

“It’s not a real complete game, but I’ll take it,” said Lee, who recorded seven strikeouts.

Thirty-four hours before the start of the British Open, John Daly was in Liverpool, England, at the bottom of the Cavern Club’s twisting black stairwell, playing guitar.

The Beatles played the club before they became a world-famous band.

“Think about all the bands that have played here,” Daly said after his set. “This is the history of music.”

Daly said he has no illusions about his musical talent, but then offered a thought that the Beatles might have appreciated.

“Music is my therapy,” Daly said. “I think for all of us it is therapy, whatever style of music you are into. If I am driving my bus, I can’t do it with no sound. The world can’t exist without music.”