Hogs' O-line commit is truly home on the ranch 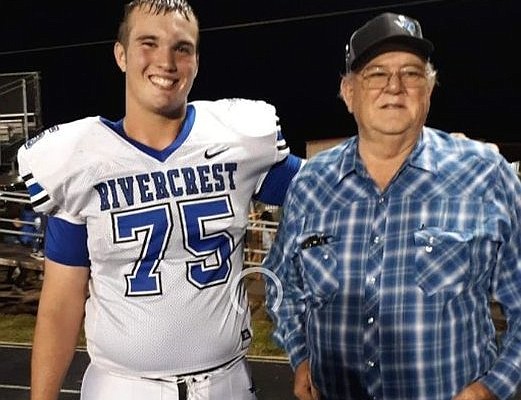 “Ever since I could walk, I’ve always been doing this and that with my granddad,” Carson said. “We’ve been doing everything together since I was itty-bitty.”

He and his grandfather have FI and Brahman cattle, as well as other livestock on the ranch.

“We raise a lot of heifers and keep some and sell some … and raise and keep a few bulls,” Carson said.

He usually wakes up about 6:30 a.m. to arrive at his grandfather’s house about an hour later.

“Me and him sit around and drink coffee [a] little bit and eat breakfast, then the day will begin,” Carson said. “We’ll get out about 8:30 and go out and check all the cows and all the cows fixing to have calves, and check on the all the calves and everything.

“We usually set the day with a goal in mind on what to get done. Some days we’ll just have an around-the-barn day with some this-and-that jobs around there, but we usually a have a big goal in mind.”

When his day is done at the ranch, Carson heads to the school for football workouts Monday through Thursday.

“Whenever it gets really, really hot in the evenings is when we’ll kind of call it a day at about 4, and then I’ll head to practice about 5 and start practice at 5:30 over at the school,” Carson said. “On Mondays and Wednesdays, we’ll do our cardio and running whole bunch. Then we’ll go to the weight room and lift for about 45 minutes, and then we’ll go outside and have position-specific drills with the offensive line.”

Tuesdays and Thursdays are focused on offensive line work. During the football season, Carson’s work on the ranch is limited to about an hour or two.

“My granddad can usually take care of a lot of the stuff in the evenings during school, but as soon as football season ends I go home and work with him in the evenings,” Carson said. “Usually during the season, it’s a lot more feeding than doing big projects. A lot of times after practice, I’ll go down there to work with him a little bit and eat supper and then go home and eat a second supper.”

Working the ranch has served him well in his football career.

Some of his fondest memories are attending livestock show competitions.

“Getting to show the cattle and getting to travel everywhere and meet people and winning,” he said. “I’ve won a butt load of buckles.”

Bogata is a rural community of slightly more than 1,000 people near the Oklahoma and Arkansas borders.

“About 80 percent of our team has some sort of ranch-type job, whether it’s working on the ranch or working at a welding shop or a feed store or something,” Carson said.

He said Coach Sam Pittman loves that he works on the ranch, and offensive line coach Brad Davis is intrigued.

“Coach Davis said he’s so interested that when he can come, he’s coming down here and see what it’s all about and let me teach him the works,” Carson said.

Carson, who plans to major in agriculture education and communications at Arkansas, said leaving the ranch and his grandfather for college will be bittersweet.

“I don’t know what I would do without him,” Carson said. “I would be a completely different person, that’s for sure. He’s taught me most everything I know. I’m so happy for that.

“I’m going to hate to leave to go to Arkansas because I’m going miss him, but I know he wants me to go and be happy and do what I can do on the field and leave with a degree.”