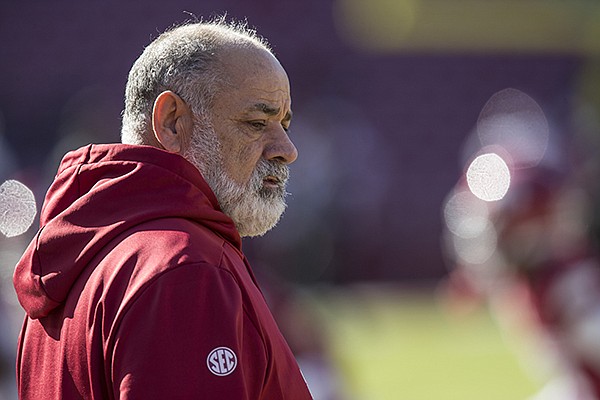 Arkansas defensive coordinator John Chavis is shown during a game against Western Kentucky on Saturday, Nov. 9, 2019, in Fayetteville.

FAYETTEVILLE — Former University of Arkansas defensive coordinator John Chavis has been hired as an assistant youth football coach in Knoxville, Tenn., according to the Knoxville News Sentinel.

Chavis, 63, is coaching the feeder program for West High School in the Knoxville Area Middle-School Age Conference, according to the News Sentinel. The team’s head coach is former University of Tennessee quarterback Jeff Francis.

Chavis has a long history in Knoxville. He previously served as an assistant coach at UT for 20 seasons from 1989-2008 and also played college football for the Volunteers. He began his coaching career at Tennessee as a graduate assistant.

Arkansas fired Chavis and eight other assistant coaches at the conclusion of the 2019 season when it finished 2-10 overall and 0-8 in SEC play for the second consecutive year. Chavis was owed approximately $1.25 million in severance through February 2021 at the time of his firing, subject to offsetting mitigation.

According to terms of his contract, Chavis was to be owed 70% of his $1.6 million contract for the 2020 season, as well as a prorated amount for what remained on the second year of his contract that ended in February of this year.

Under an offset provision in his UA contract, Chavis’ “duty of mitigation includes the obligation to maximize his earning potential with a new employer.” The News Sentinel did not report Chavis’ salary in his new position and Tennessee’s open record law is not accessible to out-of-state residents.

The UA, not the Razorback Foundation, is the guarantor for Chavis’ buyout and all other buyouts agreed to since UA athletics director Hunter Yurachek was hired in December 2017.

The Razorback Foundation is the defendant in a federal lawsuit filed by former Arkansas head coach Bret Bielema, who is seeking damages after the foundation ceased buyout payments to him 23 months early. The foundation, a third-party guarantor for Bielema’s buyout with the UA, claims in court documents that Bielema breached his buyout agreement by accepting a “well-below-market” value position with the New England Patriots in the year following his firing at Arkansas.

The 2020 season will be Chavis’ first coaching outside the SEC in 32 years. He was promoted from a position coach to defensive coordinator at Tennessee in 1995, beginning a stretch of 25 consecutive seasons as an SEC coordinator that also included time at LSU and Texas A&M.

Most assistants under former Arkansas coach Chad Morris have not found comparable employment. Six of Morris' 10 assistants in 2019 are not currently on FBS coaching staffs.

Morris was hired as an offensive coordinator at Auburn last December, just more than a month after he was fired by the Razorbacks with a 4-18 record.