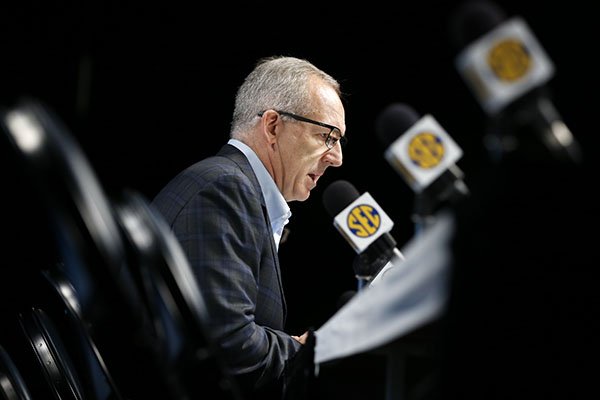 SEC Commissioner Greg Sankey said after a meeting with all 14 conference athletic directors on Monday that the league is hoping to wait until late July before making a firm decision on football in the fall.

"I've talked about late July. I've always observed the fundamental truth that if we can wait to make major decisions, we're going to have better information," Sankey said on the "Paul Finebaum Show" on the SEC Network shortly after the meeting in Birmingham, Ala., ended. "And so we're going to be patient."

The SEC, Atlantic Coast Conference and Big 12 have not made definitive decisions about whether to proceed with 12-game seasons, to modify schedules or to push toward a spring schedule due to the coronavirus pandemic that reached its fourth month of disruption in college athletics Monday.

On Thursday, the Big Ten announced it would play a conference-only schedule if there is to be football, and the Pac-12 followed suit Friday.

Sankey said he received a phone call from Pac-12 Commissioner Larry Scott, who announced he had contracted covid-19 on Friday, but did not indicate whether he had heard from Big Ten Commissioner Kevin Warren.

"So the Big Ten made its decision. We have no common games with the Big Ten Conference this year," Sankey said on the show. "We did have two games with the Pac-12. The USC-Alabama game ... and then Colorado-Texas A&M. We've had minimal direct impact on our schedule.

"So they made their decisions. You've seen statements from my colleagues in the Big 12 and the ACC consistent with our thinking of let's use time to the extent that it's available to gather information, and we'll make our determinations in an appropriate time as we see fit."

University of Arkansas Athletic Director Hunter Yurachek released a statement after the meetings, which started at 9:30 a.m. Central at the conference offices and concluded around 5 p.m.

"Today's meeting was another productive step as we work collaboratively to face the many challenges related to this pandemic," Yurachek said in the release. "The purposeful way in which the SEC has approached these complex issues has enabled us to review the most updated data as we focus on the health, safety and well-being of our student-athletes, coaches, staff members and fans.

"As a self-sustaining athletics program at the University of Arkansas, we have an obligation to explore ways to mitigate the financial impact of those decisions, including our ability to continue to fully support the academic, athletic and personal development of our 465 student-athletes. Now more than ever, I am appreciative of the leadership of Commissioner Greg Sankey and UA Chancellor Joe Steinmetz."

The meetings, on the very day SEC media days were to have started in Atlanta, were the first by conference athletic directors and top SEC officials since March in Nashville, Tenn., when the pandemic put a screeching halt to live sports shortly after the Arkansas basketball team downed Vanderbilt 86-73 in the night game to conclude the opening round of the SEC Tournament.

Sankey noted coronavirus trends have been going in the wrong direction in many of the 11 states in the SEC footprint.

"The trends are not what we desired, not what we had experienced a bit earlier in the summer," Sankey said on the show. "They're very much in the wrong direction, and that's problematic.

"That doesn't mean that's the finish line, that things will never change. We've seen the news around covid-19 alter itself in different ways for a number of weeks. What we've identified is an opportunity in late July for an important check-in, to see what our public health reality is."

Sankey noted public actions regarding the virus need to improve.

"The fundamental point is my first point, which is we have to see a change in public health trends to build the comfort that we'll have an opportunity to compete this fall," he said. "There has to be more intent, more focus on heeding the guidance that's been provided on distancing and gathering, on face masks ... on hand sanitization."

To that end, the SEC released a video Monday that featured all 14 SEC head football coaches wearing a mask with their school colors and logos on them. After the 14 coaches flashed past in alphabetical order of their school name, this text appeared: "We're wearing them. Are you?"

Sankey stressed on the SEC Network the importance of gaining more knowledge with more time, but admitted, "It's an asset that's slipping away. It's rapidly slipping away."

Finebaum asked Sankey what developments he would need to see before the SEC made its decision on football.

"The activities that I need to see or that we need to see are the ability for our hospitals and our health care systems to manage what's happening with covid-19," Sankey said. "I sit here today talking to you not knowing what will happen in the fall. I also feel a responsibility not to just say, 'OK, we're done. Or we're headed this direction at this time.' "

The commissioner also said the availability to have reliable testing is an important consideration before making that decision.

"And every one of those conversations has ended with, 'It'll be important to watch what happens over the next two or three weeks.' Those aren't overly hopeful comments, and I want to be clear about that," Sankey told Finebaum. "They're realistic. The reminder of how we have to watch what's happening in the health arenas around us. I take those points of guidance seriously."

Sankey noted the historic aspect of the pandemic.

"What we have to understand is we've never been through this before," he said on the show. "I wish I had the charts and playbook to say, 'Here are the simple answers.' There are no simple answers."