SEC postpones competition through end of August; no decision yet on football 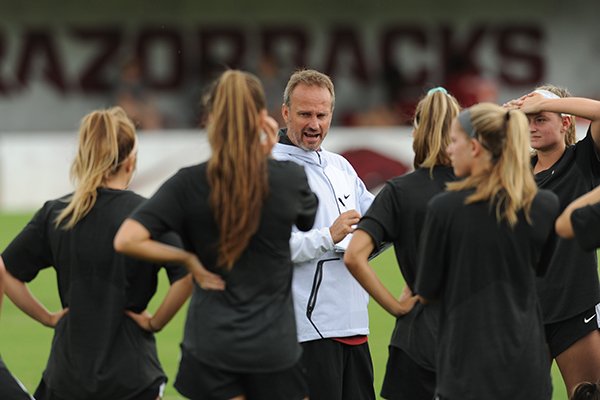 The Southeastern Conference announced Tuesday that it is postponing competition in volleyball, soccer and cross country through at least Aug. 31.

No decision has been made in regards to SEC football, which is not scheduled to begin until the first week of September.

Last week, the Atlantic Coast Conference announced a similar plan to suspend games through the end of August. Arkansas was scheduled to play two soccer games against ACC opponents during that time – the season opener at Duke on Aug. 20 and at North Carolina on Aug. 23.

The North Carolina date was to be the back end of a home-and-home agreement that began last season when the Razorbacks upset the No. 1 Tar Heels 2-0 in Fayetteville.

Arkansas soccer, the reigning SEC regular-season champion, was also scheduled to face Memphis and Oral Roberts in scrimmages on Aug. 9 and Aug. 14, respectively, and host Arkansas-Little Rock on Aug. 28 and Wyoming on Aug. 30 in regular-season games.

“Throughout this process the top priority for all of us has been the health and well-being of our student-athletes, fans and staff,” Razorbacks soccer coach Colby Hale said in a statement. “We all appreciate the hard work and leadership from Commissioner Sankey, Hunter and others during a very difficult time so we will continue to listen to the guidelines and information they provide.

"When the time comes, we’ll have a plan and be ready to go.”

The Razorbacks’ volleyball team was set to play Southern Illinois, Louisiana Tech and Davidson in the Arkansas Classic in Barnhill Arena on Aug. 29-30 as well.

“Together, our Athletic Department and the SEC have made the safety of our student-athletes their overriding priority,” Arkansas volleyball coach Jason Watson said. “The decision today to delay the start of our season is reflective of that shared priority. As a program, we’re committed to playing volleyball this Fall. That’s our goal.

“We are thankful for the countless hours people on our campus and at the SEC have spent, and continue to spend, on making our goal possible.”

Arkansas’ cross country teams are scheduled to open their seasons on Sept. 4 at the Arkansas Preview.