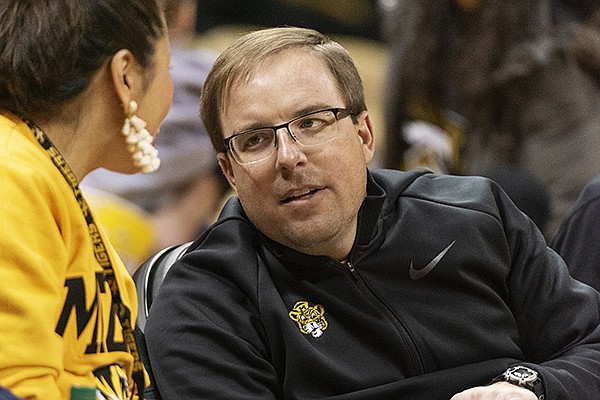 Missouri football coach Eli Drinkwitz talks with a fan during the second half of an NCAA college basketball game against Florida Saturday, Jan. 11, 2020, in Columbia, Mo. Missouri won the game 91-75. (AP Photo/L.G. Patterson)

COLUMBIA, Mo. — Eli Drinkwitz has been the head coach at Missouri for just over seven months.

He has yet to lead the Tigers onto the football field, much less win a game, yet his role in the community already has forced him to take some important stands.

First, it was supporting his new players as they pushed for equality amid the Black Lives Matter movement. Now, it is encouraging folks to wear masks when they are out in public, which health experts insist is among the best ways to mitigate the spread of the coronavirus — even though, much like social justice, it has become a highly politicized issue.

“I don't believe I have power. I have influence,” Drinkwitz explained during a Zoom meeting Wednesday, which he began by wearing a mask with the Tigers' logo on it.

“I get that there are arguments on both sides. I get that for some reason it's been politicized,” Drinkwitz continued. “I just happen to believe that is good public health policy. Does it solve all the problems? I don't know. I'm a football coach. But I know that to get things done we have to buy into a collective mission. Is it a perfect plan? Seldom plans are perfect. But they have a plan in place. Let's work the plan. That's what were trying to do. Let's see if it works.”

Time is running out to see if it works before decisions must be made on the upcoming college season.

The Big Ten and Pac-12 already announced they will play conference-only games this fall, if they are able to take the field at all. The Ivy and Patriot leagues from the lower-tier FCS have decided to not compete in the fall.

Officials from the SEC met Monday to discuss their plans but will not make a final decision until later this month.

“It is clear that current circumstances related to COVID-19 must improve," SEC commissioner Greg Sankey said in a statement. “In the coming weeks we will continue to meet regularly with campus leaders via video conferences and gather relevant information while guided by medical advisors.”

Missouri has become one of the latest hot spots for the coronavirus, reporting 28,826 cases with 932 people who were hospitalized Tuesday.

Nationwide, nearly 3.5 million people have contracted the virus and more than 136,000 have died.

Part of the problem in Missouri has been inconsistent messages. Many communities have implemented policies that require the use of masks in public spaces and where social distancing is not possible, and Gov. Mike Parson encouraged people to do the same. But even Parson went without a mask while making a series of public appearances over the weekend.

There is no such waffling for Drinkwitz, an Alma native who still plans on the Tigers playing their opener Sept. 5 against Central Arkansas.

“I'm frustrated with the fact that when people argue against it, why are we not willing to try it?” he said. “My decision for me is a personal decision because of how it affects me on a personal basis. I can't affect if someone in Florida is going to wear a mask, but I can — as an avenue of change — I can help recommend here in Columbia that people wear a mask.”

It isn't just the football season that is hanging in the balance, either. Drinkwitz wants to be able to visit local restaurants and bars, meet with fans and attend the kind of events with boosters that are vital to running a successful program.

“I'm not sure exactly what the numbers need to be or what they're looking for and all that. What I know and what I am suggesting is that numbers in and around our community are going up,” he said, “and I don't know about you all, but I like going to Shakespeare's Pizza and some of the great spots in Columbia, and I really don't want to not be able to go to those places anymore. And in order for my wife to not have to home school this fall, we have to wear masks.”

Drinkwitz's edict appears to be working as the football team continues offseason workouts. The school has administered nearly 400 tests since early June with just 10 positive cases, none of which were connected to the Tigers' facilities.

Meanwhile, nearby schools Kansas and Kansas State have been forced to halt workouts after too many positive tests.

“Look at our numbers compared to everybody else,” Drinkwitz said. “I think our guys have heeded the message. They have gone above and beyond to ensure they are doing everything possible. You can do everything right and still get exposed, but you don't have to put yourselves in an adverse situation. Now, the trick is to continue doing it.”