Pfeifer was fabulous as a prep

By: Kevin Taylor, Special to the Democrat-Gazette
Published: Wednesday, July 15, 2020 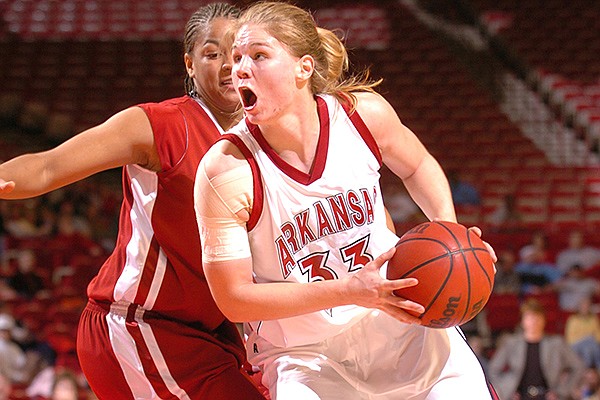 FORT SMITH — Ron Rippy had a roster of stud players in the late 1990s and early 2000s at Ozark. Shooting guards, unselfish post-players. There were role players, too.

But everyone knew when the game was on the line, Sarah Pfeifer was going to get the ball.

“She was a player that went the realm of the normal high school player,” the former Ozark coach said. “She was phenomenal. She was absolutely a DI player from the eighth-grade level. We knew she was going somewhere to play.

“But when she got to high school, she relied on her other players (teammates), rather than taking her skills one-on-one.”

“It was a lot of fun getting to play with your friends every night,” Pfeifer said. “It’s different when you get to college because everybody is from all different parts of the country. You learn to be friends, but kids that you grew up with, you were friends before you were teammates.”

Rippy said he was able to connect quickly with the players that extended well beyond the court.

Pfeifer At a Glance

CREDENTIALS Pfeifer led her Ozark teammates to back-to-back state titles in 2000-01. … A fan favorite at Bud Walton Arena, Pfeifer played four years with the Lady Razorbacks, scoring 1,056 points and pulling down 545 rebounds in 124 career games. … Now a head high school coach at Erie, Colo., Pfeifer’s team won 23 games this past season. … She was also a track champion at Ozark and competed in the state heptathlon twice.

QUOTABLE “It was a lot of fun getting to play with your friends every night. It’s different when you get to college because everybody is from all different parts of the country. You learn to be friends, but kids that you grew up with, you were friends before you were teammates.” - Sarah Pfeifer

“That’s the beauty of sports,” Rippy said. “That type of relationship can be established and it can last forever, and that’s actually a whole lot more important than the titles and whatever happens with the team — although that is very important and that was a major event that points to a time when these kids were very, very good at what they did.”

In addition to winning back-to-back state championships in 2000-01, the school won a third title as well in 1998. Rippy’s squad reached the finals in 2002 and ‘04, with the ‘02 team losing to Highland and the ‘04 squad dropping one to Farmington.

In addition to her basketball exploits, Pfeifer also excelled in softball and track and field. She might have led the football team in tackles, too, had she played.

“I really loved track because it’s just you competing as one — it’s you against seven others,” she said.

While in high school, Pfeifer competed in the heptathlon as a sophomore and junior.

“We knew she was a great player,” Rippy said. “But when she got to high school, she relied on other players, rather than taking her skills one-on-one.”

Pfeifer coached for a while in the Springdale school system before finding her way to Colorado. The former Lady Hillbilly great, who went on to star at the University of Arkansas, landed the head coaching job at Erie, Colo. in 2016.

A high school in the suburbs of Denver, Pfeifer helped coach Highland to a 23-3 record in 2020 and has amassed a 56-45 mark over her first four seasons.

“Sports are different in Colorado,” she said. “It’s more laid back. It’s definitely not the south. It took some adjusting. High school sports are everything in Ozark. It took some getting used to.

“This year we’ve finally built up to where we’re getting good crowds.”

Pfeifer said she often reflects back on Rippy’s coaching tendencies.

“He’s a Hall of Famer for a reason; a great person, a great coach,” she said. “The way he treated people is probably the most important thing. I run our match-up zone a little bit, so the X’s and O’s, that’s probably the biggest thing.

“But with him, I learned how to run a team and how to treat people.”

Pfeifer excelled for the Lady Razorbacks, too, though she’d often find herself matched up with bigger players. Despite some injuries, Pfeifer finished her career with 1,056 points.

Most of her players have no idea how good of an athlete their coach was.

“One of my players Googled me and saw Candace Parker and me in the same picture,” Pfeifer said. “They could relate at that point.”