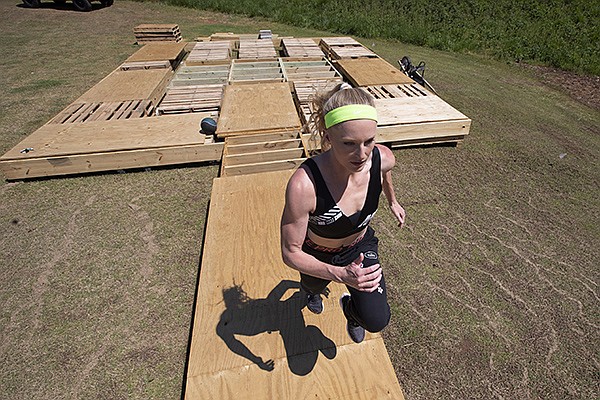 FAYETTEVILLE -- Ariel Voskamp Lieghio is a Cabot native, but she won the pole vault title at the Irish National Indoor Championships on March 1 in Dublin.

Lieghio, a four-time All-American at the University of Arkansas from 2014-16, now has dual citizenship for the United States and Ireland because she married an Irishman, Anthony Lieghio, who was a distance runner for the Razorbacks.

"I spent a year in Ireland getting my dual citizenship stuff in order, getting in some training and trying to find my place in their track and field system," Lieghio said. "Now for the next Olympics [in 2021] I'll declare for Ireland."

Lieghio, 27, returned to the United States in April and is now living in Fayetteville again and being coached by April Steiner Bennett, a former Arkansas All-American.

Today, Lieghio will be in Greenville, S.C., to compete at an event hosted by Sandi Morris, the 2016 OIympic pole vault silver medalist for the U.S. and an NCAA champion at Arkansas. Morris also has won U.S. and World Championship titles.

The event, which has been sanctioned by USA Track and Field, will be held at the pole vault runway and pit built by Morris and her father, Harry, in her parent's neighborhood.

"My dad and I had been wanting to build this facility for a number of years," Morris, 28, said in an email. "Hosting meets on it was definitely a goal of ours the entire time. We kept that in mind during the building process because we wanted it to be absolutely perfect -- up to competition standards."

There will be three former Razorbacks competing, with Megan Zimlich joining Morris and Lieghio.

"It's going to be really cool," Lieghio said. "It's been so long since all three of us have competed at a meet together."

The event – which is presented by eyewear company Zenni and World's Greatest, a video media branding company – will be limited to 150 spectators socially distanced and wearing masks.

"It will help get the adrenaline up," Morris told the Greenville News of having fans. "We'll have energy all around us and we feed off of that."

Zimlich, 27, lives in High Point, N.C., where she works in business development for an apparel company and trains with her fiance, 2018 U.S. indoor champion Scott Houston.

The event will be shown on ESPN YouTube TV at 5 p.m. Thursday.

"I would say I'm actually still improving," said Zimlich, whose personal best is 14 feet, 5 1/2 inches. "I'm better now than I was as a collegiate vaulter. I'm continuing to get stronger and devoted to training.

"I think Sandi's excited to have people in her backyard jumping. Having us all there together I think will create a lot of good, positive energy."

Lieghio, who has a personal-best of 14-3, cleared 13-2 to win the Irish National title after rehabbing from a knee injury.

"I had a nasty case of jumper's knee," Lieghio said. "Thankfully, nothing was torn or anything like that.

"But I had to modify some of my training, and I think I did it good enough that it kept feeling better and better to the point where I'm healthy now. I'm thankful for that."

Lieghio said she's also thankful to be among the vaulters to compete in Greenville tonight.

"Their setup looks so nice," Lieghio said. "It's hard to even find meets right now, so to be able to come to Sandi's place is a huge deal for me."

Lieghio said she doesn't have a specific height in mind for the meet.

"I just want to clear some bars and be able to compete with the other girls," she said. "I feel like if I focus on being competitive, the heights will come."