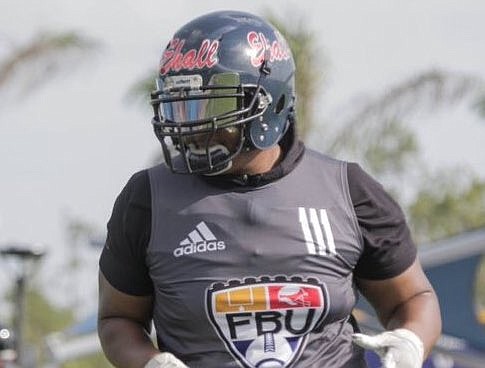 It appears Arkansas football has only signed one prospect from the city of New York, but Tuesday the Razorbacks took steps to try to land another when they offered offensive lineman Armon "Big Baby" Bethea.

“After receiving the news that I got an offer from Coach Brad Davis, I was very hyped and excited, especially since it’s my first SEC offer,” Bethea said.

ESPN rates him a 3-star prospect and the No. 88 offensive guard in the nation for the 2021 class. He's coming off a recent strong showing at a camp in Naples, Florida and received an invite to the 2021 All American Bowl.

After receiving the offer, Bethea got online to take a look at Arkansas.

“I did a little research on the football program and I saw that the football facilities rank in the top 25 in the country,” Bethea said. “I also like the fact that Coach (Sam) Pittman was previously one of, if not the top, offensive line coaches in the country.”

“Coach gave it to me and it kind of stuck,” Bethea sad.

Landberg has known Pittman since his days at Georgia and also knows offensive graduate assistant Kevin Johnson, who is from Brooklyn. Bethea’s offensive line trainer Willie Anderson also has a relationship with Davis.

Bethea is hoping the NCAA lifts the ban for on-campus visits at some point.

“I would like to take some visits prior to making my decision,” Bethea said. “I would love to visit Arkansas once this pandemic clears up."