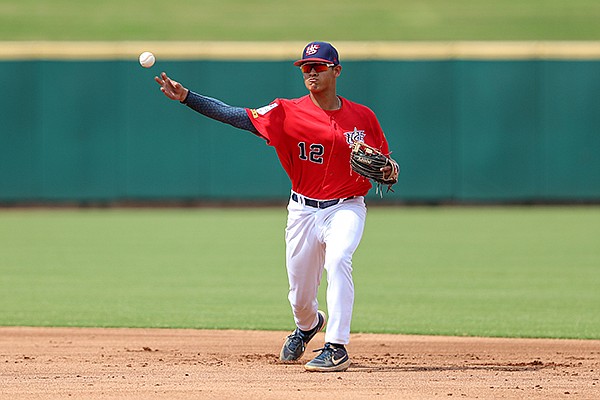 Shortstop Jayson Jones of Savannah, Texas, is one of the top high school prospects in the class of 2022.

FAYETTEVILLE — Arkansas’ 2022 baseball recruiting class has soared up the national rankings this summer.

The Razorbacks received another jolt Thursday night when infielder Jayson Jones of Denton (Texas) Braswell committed. Jones is the top prospect in Texas and No. 7 prospect nationally, according to Perfect Game.

He has been one of the top players on the travel circuit this summer while playing for the Dallas Tigers. At the Perfect Game Junior National Showcase last month, Jones recorded a 100.4 mph exit velocity.

Jones is the fourth top 100 player to commit to Arkansas in the 2022 class. The other three are Arkansans: right-handed pitcher/outfielder Cooper Dossett (43) of Springdale Har-Ber; shortstop Easton Swofford (46) of South Side Bee Branch; and right-handed pitcher Colton Sims (95) of Russellville.

Dossett was a standout at the Perfect Game Junior Nationals when he had a throw clocked at 100 mph from the outfield to tie the event record. He has been clocked in the low 90s off the mound.

Jones’ commitment comes a week after right-handed pitcher Carter Boyd (6-2, 185) — a former Florida commit — pledged to the Razorbacks. Jones and Boyd have played together with USA Baseball.

Their commitments have lifted the Razorbacks to No. 8 in Perfect Game’s class rankings.

Boyd, who is from Lewisville, N.C., is ranked the No. 186 overall prospect and No. 53 prospect at his position in the 2022 class. His fastball has been clocked at 91 mph.