By: Gary Hines, Special to the Democrat-Gazette
Published: Sunday, July 19, 2020 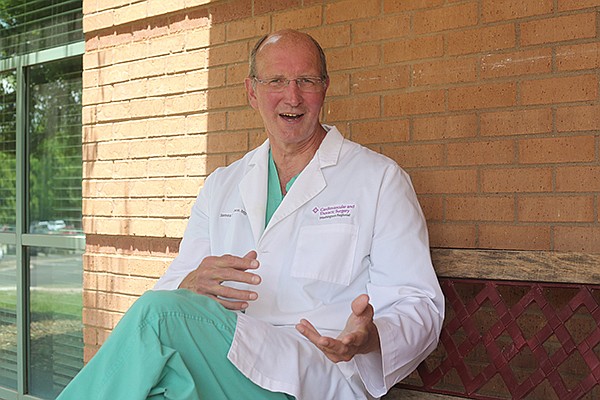 It was the summer of 1982, a few months before the start of the season. Counce had been one of Sutton’s assistant coaches for three years. Before that, he was in Sutton’s first recruiting class at Arkansas and a member of the 1978 Razorbacks team that reached the NCAA Final Four.

Counce was at a crossroads in his life: He’d been accepted earlier into Arkansas’ medical school, but his three-year deferment was about to be up. If he didn’t enroll, he’d have to reapply — and acceptance was no guarantee.

Sutton knew about medical school and had encouraged Counce to go. There were a lot of pitfalls in coaching — pressure to win with little job security. But after two years, he thought Counce had decided on coaching. Basketball can hold a vice grip on those at the higher levels.

The assistant coach told Sutton he was giving up basketball to pursue a career in medicine. The look from Sutton was “stunned disbelief” and brief silence, Counce says, before the coach told his pupil it was the right decision. Counce cleaned out his office and headed home.

By the time he got home, Sutton had called. Sutton and his wife, Patsy, took Counce and his wife, Kathy, out to dinner to try to get him to reconsider. But the coach who had persuaded Counce to come play at an also-ran basketball program eight years earlier could not convince him this time.

Counce’s journey that followed took him from jock to doc. He traded in his playbook for an anatomy book. The pressure of winning in college basketball traded to put people’s lives, literally, in his hands.

Counce would graduate from medical school, move back to Northwest Arkansas and become a heart surgeon in Fayetteville.

Now, four decades after he played his last game for the Razorbacks, Counce, 64, has been inducted into the Arkansas Sports Hall of Fame. He is the fourth member of that Final Four team to be selected, joining the so-called Triplets — superstar guards Sidney Moncrief, Ron Brewer and Marvin Delph — who all were inducted in the 1990s.

Counce’s long road to the Hall of Fame began in Memphis. The son of a mechanical contractor and a homemaker, he started playing basketball at the age of 6. His father poured a small concrete slab and erected a basketball goal in the backyard. Organized basketball started when he was 8.

He starred at White Station High School and dreamed of playing at Vanderbilt University in Nashville. It was close to home, friends went there and Vanderbilt was known for its academics. Counce was already looking to go to medical school and become a heart surgeon.

Vanderbilt, the reigning SEC champions, recruited Counce for a while before sending him a letter saying he wouldn’t be offered a scholarship.

Sutton, who was among five head coaches recruiting Counce, convinced him to come to Arkansas, which hadn’t won a conference championship since the 1950s. The school, he says, was committed to making Arkansas a “top-notch” basketball program and to improve its facilities —including Barnhill Arena, where the basketball team had to share space when the football team needed an indoor practice facility. Counce once described Barnhill as worse than a barn, with all its dust.

“He promised three things,” Counce says of Sutton. “He promised that I would graduate, that during the time I was in school we would go to Hawaii to play. He promised we would have a chance to play in the NCAA Final Four.”

That last one seemed like a stretch, Counce says.

But it wasn’t. During that Final Four season, Counce, a 6-foot-7 senior forward, was routinely assigned to guard the opposing team’s top scorer. The Triplets — who scored almost 70% of the Razorbacks’ points as they won the conference championship and went to the NCAA tournament — were magic and got most of the attention. Counce, an Academic All-American, led the team in assists.

One thing Counce was adamant about was that he would not lead the team in notoriety.

Toward the end of the NCAA regional final against Cal State Fullerton that would send them to the Final Four, Counce had a steal that would seal the win. Dunking had recently been restored in college basketball. Teammates were shouting and daring him to dunk the ball as he dribbled toward the goal.

He did a layup.

“The only way you could possibly mess that play up was to go in for the dunk and commit a technical foul [by hanging the rim] or miss the shot,” Couch says. “My mindset was, whatever I did, don’t mess this up.”

In the Final Four, Arkansas would lose in the semifinals, 64-59, to eventual national champion Kentucky. 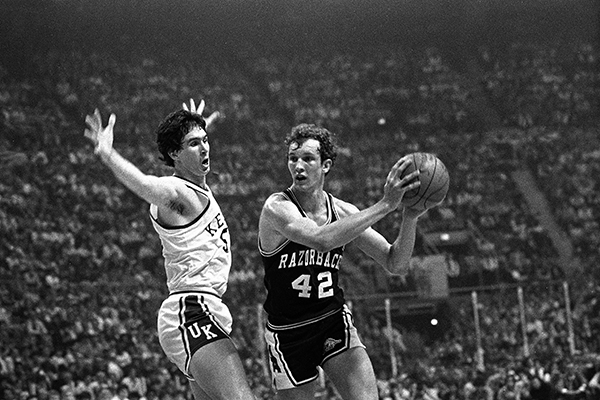 Counce wound up injured during the consolation game against Notre Dame. He was going against Irish center Bill Laimbeer, who would become notorious in the NBA for his physical play. Counce says it’s not true Laimbeer hurt him. He fell on top of Laimbeer.

Counce took himself out of the game. It turned out he had injured his kidney and doctors would remove part of it. It is the closest thing he has to a lasting sports injury.

The Triplets were the stars of that Arkansas team, says Pat Foster, an assistant coach with that team. Counce was the glue.

“He helped that team win physically as well as mentally,” Foster says. “He was the liaison between the coaches and the players. They would listen to him. He had a strong sense of people’s feelings and how to make them better. He made the coaches and the other players better.”

During his junior year, Counce was roommates with Steve Stroud, the team’s center. Foster says the two knew that with The Triplets, they were part of something special.

“They were in their room. One of them said, ‘I just hope we don’t mess them up. If we don’t, we’re going to do great things,’” Foster says. “That was the attitude they had. They were team players.”

Triplet Sidney Moncrief, who would go on to play 11 seasons in the NBA, says Counce was selfless.

The Triplets “were stronger personalities than people realized. You needed someone to be a calming force,” Moncrief says. “Not that we were hotheads, but we needed someone on the team that held us together and forced us to blend. If Jimmy had wanted more plays called for him, we would not have been the team we were.”

Counce would earn a bachelor’s degree in chemistry and be accepted into Arkansas’ medical school. He also decided to become a graduate assistant to Sutton. Medical school was no longer a slam dunk.

“I had gotten bitten by the coaching bug,” Counce says. “We had a good program. We were winning ballgames. The longer I coached, the more I liked it.”

But after two seasons the medical school deferment was looming. He had to make a choice on whether life would be better without basketball. He chose medicine.

Counce didn’t look back much.

“He had some regrets sometimes — not major — but he would have loved to coach,” Foster says. “He would have, no doubt, done well.”

Counce went to the University of Arkansas for Medical Sciences in Little Rock, graduated in 1986 and did a fellowship at a hospital in New York before moving back to Northwest Arkansas to open his medical practice.

Today, Counce lives in Springdale and does heart, lung and chest surgeries. His office looks out on Washington Regional Medical Center in Fayetteville. He doesn’t want to talk about how many surgeries he has done and is equally guarded about how long he’ll continue to do surgeries. (“As long as I am physically able.”) Foster, who moved back to Fayetteville after retiring from coaching, says the two of them attend Arkansas basketball games together.

Being a basketball player was an important part of his life and he received a lot of recognition for what those teams accomplished, Counce says, but medicine has been his calling for 40 years.

“When I first went to medical school, I was still in some ways wishing I was continuing to coach,” he says. “There’s a lot of reward in coaching. If you talk to anybody who has worked in coaching, the feeling of shared accomplishment, the effort involved and the camaraderie of a team. It is not limited to athletics, but it is highly refined in athletics.

“No one goes into medicine seeking celebrity,” he adds. “The only celebrity I might have was my association with some great teammates and a great coach. I have had a tremendous amount of satisfaction as a physician and would certainly consider that to be how I would identify myself.”

Foster and Moncrief both say they would trust Counce to operate on them.

“Put me in a state and get Jimmy Counce in the room as soon as possible,” Moncrief says with a laugh.

Counce has been married to his wife, Kathy, for 40 years. They met in college and got married while she was an undergraduate and he was at the start of his coaching career. She worked as a hospital dietitian while he was in medical school. Kathy’s sister is married to Dallas Cowboys Owner Jerry Jones.

The father of three grown daughters, Counce doesn’t play basketball anymore, except for maybe shooting around at the gym. No one-on-one or three-on-three games.

“That’s asking to get hurt,” he says.

Counce says he saw Sutton less than a month before he died in May at his home in Tulsa. Sutton, 84, had had a series of strokes and struggled to talk. During those visits as the old coach declined, they had reminisced and Counce expressed his gratitude for what Sutton had done for him. He says Sutton told him he loved him.

“Coach Sutton was not easy to play for, from the standpoint he was demanding,” Counce says. “Like a lot of coach-and-player relationships, that matures over time — especially when you are no longer playing for them. It evolves into a friendship and a deep respect. Also a very strong affection.”

No one pushed harder for Counce’s selection to the Hall of Fame than Sheffield Nelson of Little Rock, a retired utility company executive and political leader in Arkansas.

Nelson says he was surprised to learn Counce wasn’t already in. It was, he says, long overdue — criteria for induction include accomplishments on and off the court.

But it wasn’t an automatic induction, Nelson says. Decades had passed, three of the five starters on the Final Four team had already been selected and a lot of people had forgotten Counce, Nelson says.

“Jimmy was one of those ‘almost mistakes,’” Nelson says. “I would have felt terrible had he not gotten in. He’s a real class act. He was back then and he’s carried that into adulthood. To go to the next life after sports and do so well.”

Foster says the strokes left Sutton incapacitated, and it’s unlikely he knew of Counce’s selection to the Arkansas Sports Hall of Fame.

Foster says he was comfortable speaking about it on behalf of Sutton, who considered Counce among his favorite players.

“It was a friendship that lasted a lifetime,” Foster says. “He would have been so proud of Jimmy.”