Yurachek: It's not all about revenue 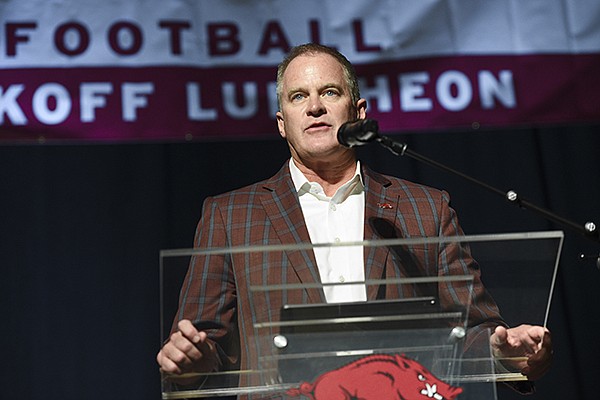 No football at all this fall would have a widespread negative financial impact on Razorback athletics and entities that associate with the department.

But Yurachek has grown weary of the talking point about how college administrators are holding out hope for football no matter what comes of the covid-19 trends.

"I hate the narrative that we're doing this just for the money at this level," Yurachek said in one of the many moments of candor he showed on a Zoom conference with reporters Thursday.

Those remarks were part of his response to a question about whether athletes have spoken to him about their take on playing sports this fall.

"It's not about the money," Yurachek said. "It's a passion for these young men and women. And yes, there's some significant financial benefit ... that comes from this, but the majority of the financial benefits go back into the lives and the experience of those student-athletes."

There have been many narratives in recent weeks about the wisdom and safety of playing sports this fall in the midst of the coronavirus pandemic, starting with football, soccer, volleyball and cross country in the fall. Perhaps the least heard of those narratives comes from the athletes themselves, whose power and persuasion have grown rapidly in recent years

Events such as Ed O'Bannon's victorious lawsuit against the NCAA; the recent cost-of-living adjustment for athletes; the ongoing name, image and likeness (NIL) conversation within the NCAA; and social justice changes have increased the volume and power of athletes' voices.

Yurachek advocated for them on the video conference.

"These men and women, they want to play their sport," he said. "They miss it desperately. They're making a great deal of sacrifices right now in their own personal social lives they normally have in the summers so they can be here and train and get better.

"They just want to play, and I'm going to try to find a way to make sure that happens."

Recent trends in covid-19 numbers do not bode well for playing a full college football season.

Notre Dame Athletic Director Jack Swarbrick late last week told the South Bend Tribune that he had been "forced to seriously ponder in recent days" the possibility of no college football season.

The Fighting Irish are scheduled to host Arkansas on Sept. 12 in the first meeting between the programs.

Swarbrick also told the Tribune that if "current trend lines continue -- as negative as they've been the past few weeks -- America is not going to return to normal. ... College football is just going to be a victim of that."

During his opening remarks Thursday, Yurachek listed some proposed guidelines regarding attendance if there is football, such as limited non-essential personnel and media members on sidelines, and the elimination of on-field presentations and recognitions. The status of bands and cheerleaders is still under discussion.

"Some of the things that really make SEC football games and college football special -- the pageantry we're all used to -- is probably not going to exist in a college football venue this year," he said.

Then Yurachek talked about the finances involved.

"Financially, football is incredibly important to us at the University of Arkansas, and I think my fellow SEC members would say the same thing," he said. "For us, it generates about $70 million of our approximately $124 million budget. Not to mention the economic impact Razorback football has across Northwest Arkansas and across our state."

Yurachek has held the line against cutting any benefits for athletes or positions or salary in the athletic department since the crisis hit in March. That stance would be in peril if there is no football.

"Obviously, if we're not able to play football there's going to be some very challenging financial decisions as a director of athletics I'm going to have to make," he said. "What I will tell you is the safety and well-being of our student-athletes will always be first and foremost and we will never compromise that. If we can find a way to safely play football, soccer, volleyball and cross country this fall, that is our No. 1 goal."

Later in the call, Yurachek was asked where the UA athletic department could reduce expenses if there is no football this season. He said there are fixed expenses such as the approximately $11 million for scholarships within the department.

"We will continue to provide those," he said. "We have some debt service on the incredible facilities that we have built. That's approximately $16 million. We may be able to refinance some of that debt to lower those payments and make some interest-only payments.

"The other expense we have is salaries. About $41 million of our budget is made up of coaches, administrators and support staff salaries. I think there'll be a time, if we don't have football, that we'll have to start looking at cutting into that pie."

The Razorbacks have retained some revenue with the cancellation of travel and lodging related to lost games. They've also pocketed money that would have been in travel budgets for recruiting in all sports with the current ban on in-person recruiting. Coaches now use online applications for recruiting purposes, such as Zoom, Google Meet and others.

"I think across our sports, that's a seven-figure reduction in our budget," Yurachek said in savings from no recruiting visits. "Our coaches have done an incredible job of recruiting virtually.

"Our RSN (Razorback Sports Network) team has built some really nice virtual recruiting videos, and I think our coaches are getting more and more comfortable with that. I don't think they feel like that's ideal, but I think you'll see even in the future, when this ship is righted, I think you'll see coaches finding a really nice balance between virtual recruiting and as much time as they spent on the road really being cut in half."

Yurachek said he has personally invested in shares of Zoom.