Star City's CJ Turner a must watch for 2023 class 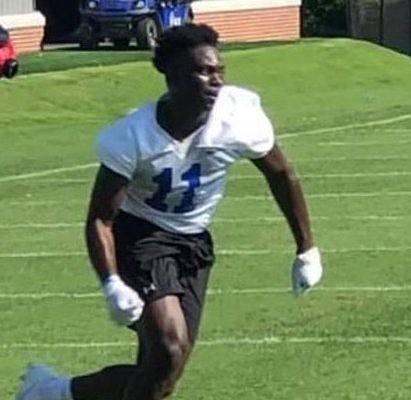 2023 athlete CJ Turner of Star City was one of the standouts at Arkansas' prospect camp on Sunday. Photo courtesy of Chris Jones

Star City athlete CJ Turner has the makings of a major college prospect after making an impact for the Bulldogs as a freshman late in the 2019 season.

Turner, 6-2, 190 pounds, joined the varsity squad after leading Star City’s junior high team to an undefeated season. He played in the last four games and recorded 32 tackles (15 unassisted), 7 pass breakups, a forced fumble and returned an interception 90 yards for a touchdown while playing safety.

“He’s got the tools. He’s going to be a special kid,” Star City coach Chris Vereen said. “The first round of the playoffs at (Southside) Batesville, he had a 90-yard pick-6 at safety. He really did some good things in the playoffs to be a ninth grader. He didn't miss a beat stepping up from junior high to senior high.”

Former Southside coach Kenny Simpson, who was hired at Searcy in June, saw enough of Turner to be impressed.

“He was a physical freak,” Simpson said.

Because of his physical maturity, Turner has been mistaken for a senior.

“You can just look at kids and know the build of them, the wingspan and bone structure,” Vereen said. “The thing about he could even put on more weight and still be OK.”

Also an excellent basketball player, Turner is a relentless worker. After school workouts, he puts in extra time.

“When he’s done with that, he’s like, 'Coach can I get in the closet and get the ladders and the boxes out?'" Vereen said. “He will spend an hour and a half after every workout doing stuff on his own, whether it be jumping boxes, running bleachers, rope raiders. It’s amazing.”

Vereen said he plans to use Turner at running back this upcoming season.

There is also a possibility Turner could grow into a linebacker.

Turner’s ability is suited for numerous positions on the field.

“He can play any position on the field skill-wise, offensively, and defensively, other than D-line,” Vereen said. “He could probably play defensive end if we needed him to.”