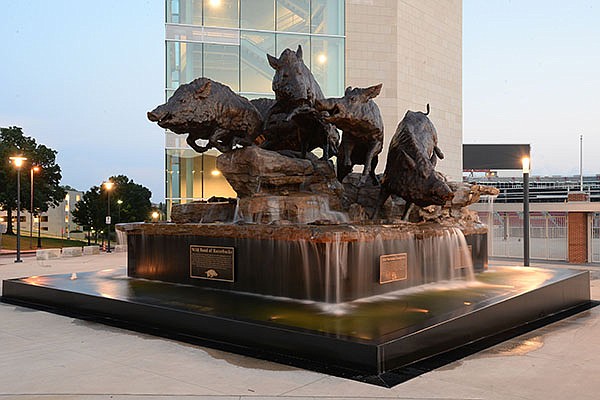 FAYETTEVILLE — The University of Arkansas athletics department began adding language to game contracts this year that provides added protection in the event there are game cancellations or postponements caused by the covid-19 pandemic.

In basketball contracts recently finalized for the 2020-21 season, the words “pandemic” and “quarantine” were added to a long list of “force majeure” events that might cause a game not to be played. Other events previously inserted into game contracts have included natural disasters, acts of war or terrorism, civil or military disturbance, and riots.

Matt McCoy, an attorney for the UA athletics department, said the latest terms were added to game contracts beginning in March.

McCoy said the department has since taken additional steps by adding the word “epidemic” to game contracts, as well as language that provides the UA contractual justification to cancel a game in the event the SEC requires it to play against a conference opponent on the same date as a scheduled nonconference game; in the event of an outbreak of a disease or illness; a forced cancellation by the NCAA or SEC; or in the event transportation is restricted to a playing site.

McCoy said ticketing is another consideration in writing game contracts for the coming year. New language gives the UA the discretion to limit tickets to visiting teams, proportional to the overall limit to capacity at a playing site.

“We don’t know how many people will be in a game, so it’s not just cancellations, but the amount of tickets we’re able to offer," McCoy said.

In most of the UA’s game contracts, as well as its travel and lodging agreements with transportation and hotel companies, provisions were already in place that covered pandemics, McCoy said. Force majeure — or “act of God” — clauses are included in most game contracts and provide teams the ability to back out due to forces beyond their control.

In previous UA game contracts, McCoy said the words “including without limitation” prior to the list of force majeure events were key. Another key term in the force majeure section is: “any other events beyond the reasonable control” of the teams.

“Even if we didn’t have ‘pandemic’ in there, we would certainly argue that pandemic was one of those things that made it impossible or unsafe to play the game,” McCoy said. “And ‘quarantine,’ too.

“The quarantine circumstance might be different. You may be in the middle of a pandemic, it may not be the reason you can’t play a game (because) all of your players are in quarantine.”

None of the language added by McCoy this year appears in Arkansas’ nonconference football game contracts for this fall. That is because football contracts are typically finalized years in advance, as opposed to most other game contracts that are written and agreed to within a year of the playing date.

The Razorbacks are scheduled to play football games against Nevada, Charleston Southern and Louisiana-Monroe at home, and at Notre Dame this year. Those four game contracts were finalized between June 2017 and August 2019.

The likelihood of those games being played appears shaky after the Big Ten and Pac-12 announced their teams would not be permitted to play out-of-conference games. Some smaller conferences have canceled fall competition altogether and reports have suggested other conferences might adapt their guidelines.

None of Arkansas’ scheduled football opponents this year are members of conferences that have made such a decision (Notre Dame is an independent) and SEC commissioner Greg Sankey said he hopes to wait until late July to make any decisions related to the upcoming season.

“I've always observed the fundamental truth that if we can wait to make major decisions, we're going to have better information," Sankey said last Monday on the "Paul Finebaum Show" on SEC Network.

"There are several options that are on the table right now, the first option still being a 12-game schedule that for us starts Sept. 5 vs. Nevada, followed by a road game Sept. 12 at Notre Dame," Yurachek said.

"We can't move on to the second option until we eliminate the first option. That first option is still very much on the table, as are other options."

McCoy said the UA was successful in backing out of all of its game, travel and lodging agreements in the spring when games were canceled, but said not all schools were as fortunate.

“What I think a lot of schools ran into this spring, they had to cancel an entire travel lodging for all of their sports, and were struggling to try to recover all the costs without paying all the cancellation fees,” McCoy said. “We were covered in ours, so we did very well in all those, but I’ve talked to other institutions and I know it hasn’t always been easy to get back the deposits for cancellations.

“We’ve had challenges where initially a vendor or a hotel or a charter might say we believe we need to pay the cancellation, so we at least have to show them that there was an executive order in place that prevented travel, or maybe the area we were going to had a limitation on the ability for us to stay there. These force majeure clauses have definitely been used through this whole post-covid era.”