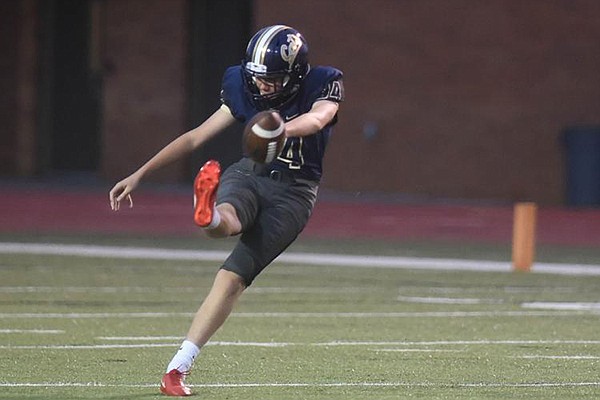 Cameron Little, one of the nation's top high school kickers, committed to Arkansas on Wednesday.

Little, 6-2, 170 pounds, of Moore (Okla.) Southmoore, received a scholarship offer from the Razorbacks on Tuesday and chose Arkansas over offers from Colorado, Oklahoma State, Nevada, Air Force, Army and Navy.

“I know Coach Fountain coached at Georgia and several other SEC schools, and he’s put about five guys into the NFL over his coaching career,” Little said. “I know he just put Rodrigo Blankenship from Georgia into the NFL. That right there kind of solidified why I wanted to go there. I know he’s really good with special teams.”

If Little signs with Arkansas, he’ll be the first scholarship kicker to ink with the Hogs since Cole Hedlund in 2014. The March trip to Fayetteville also allowed him to get to know most of the coaching staff.

Little made 5 of 7 field goal attempts with a long of 46 yards as a junior. He made all 14 of his extra-point attempts and punted 26 times for a 34.3-yard average. Nine of his punts were downed inside the 20-yard line.

Little also had 26 kickoffs with 20 touchbacks. He has been selected to play in the All-American Bowl in January.

A strong desire to play in the SEC helped Arkansas with Little.

“I wanted to go and play at an SEC school because I feel like that’s the best conference in the country, Little said, "and reason No. 3 is it’s close to home and I feel like I can earn the spot my freshman year."

Little has a 3.6 unweighted and 4.1 weighted grade point average. He’s looking to major in business marketing but is also considering journalism. Arkansas’ facilities also put the Razorbacks ahead of the other schools.

“LSU’s and Oklahoma State’s facilities weren't as near as good as Arkansas'," he said. “I feel like that part has to do with the SEC and how big the SEC conference is.”

Little is the Razorbacks’ 16th commitment for the 2021 class.