UA coach a model for friends in NBA 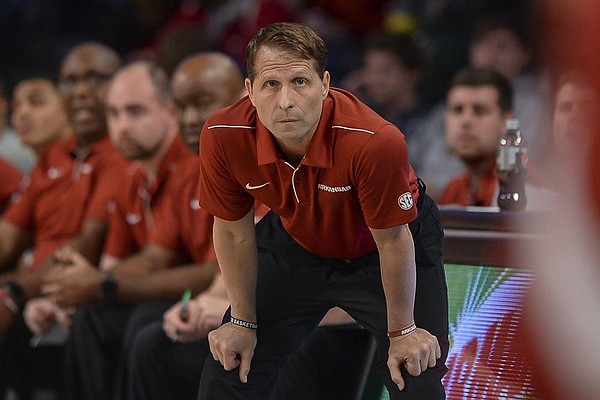 Arkansas Coach Eric Musselman and his staff elected to wear polo shirts and slacks instead of suits throughout their first season with the Razorbacks. Now Musselman’s friends on NBA staffs are looking to him for tips on more casual attire. (AP file photo)

FAYETTEVILLE — When the NBA resumes play July 30 in Orlando, Fla., the coaching staff attire will take a page from Eric Musselman's fashion book.

Musselman, the University of Arkansas basketball coach, and his assistant coaches and staff members all wear matching polo shirts for games.

With the NBA teams all playing in their bubble at the Walt Disney Resort, the dress code of wearing suits is being relaxed for the coaches, and they are allowed to wear polo shirts.

"It's just brilliant that Adam Silver came out in the press that they are allowed to wear a polo," Musselman said. "In all honesty, once you do it, they are probably not going to want to go back to suits.

"Nobody's trying to out-dress another guy on the staff," Musselman said about everyone being in matching shirts for games. "I think it's a lot less ego when everybody wears a polo, because it's like your staff uniform.

"Everyone wears the same thing from the head coach to the grad assistants. Everybody looks the same, just like your players do."

Musselman said wearing polos also will show which NBA coaches have done a good job of working out.

Musselman has been talking to his friends in the NBA about more than polos. With college teams beginning preseason practices this week, Musselman said he has been reaching out to some NBA coaches about how their practices have gone leading into the resumption of the season, which was suspended March 11 because of the coronavirus pandemic.

"There are certain people in the NBA that I talk to all the time," Musselman said. "The Clippers and the Bucks being the two organizations I talk to the most."

"A couple of guys with [the Clippers] I'm talking to daily," Musselman said. "I'm constantly asking them just how their workouts have been conducted and what they're learning.

"Certainly once games start taking place, then we'll really have to try to figure out what worked well and maybe what some of the challenging things were."