Fishing in the most beautiful places on earth 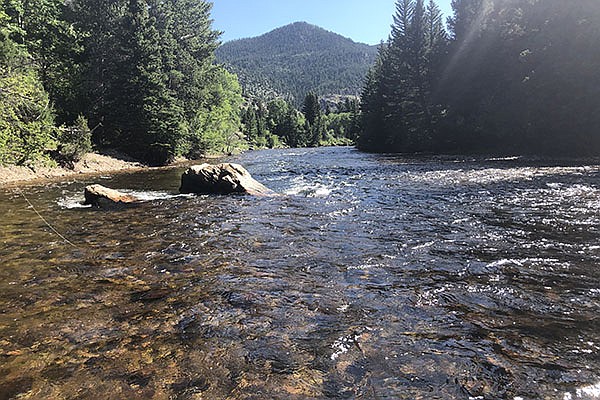 Normally, fishermen do not detail their favorite spots. I like to say I caught them below Bull Shoals Dam when I’m on the White River.

And, that would be above Calico Rock. That covers around 64 river miles. I’m not providing much help.

This column is different. I am going to give a few exact spots where I fished my Colorado vacation for 2020. I don’t expect anyone is going to bother to find them, especially with covid-19 slowing travel.

I went to wilderness areas of north central Colorado in early July, with one adventure into the backcountry of Wyoming. I dare you to find any of these places. You will need a Delorme topo map in some cases. You will need detail to find the trails.

Joining Arkansas natives and Colorado residents Jeremiah Gage and Jim Daniel, I fished six days. Some of the stops included the Big Thompson, Colorado, Encampment, North Platte and Poudre rivers. There was also some creek fishing near Buffalo Pass and an evening hike in Moraine meadows in Rocky Mountain National Park.

Only one of those was with a guide: a day in Greysen Lincoln’s drift boat on the Colorado. We floated four miles – some in white water – between Pump House and Radium. Lincoln works for Blue Quill Anglers in Evergreen.

Lincoln just graduated from Western Colorado State University in Gunnison where he signed to play football, but wound up as a rugby star. He said football lost out to the Gunnison River. A cool mountain trout stream is a glorious winner over August football training camp.

“I made it five days through two-a-days my freshman season,” Lincoln explained as he rowed us down the Colorado. “They gave us the sixth day off and I went to the Gunnison River. Never went back to football. College football is way too serious compared to high school, just plain fun.

“I’d rather row a boat and fly fish than have a pulling guard hit me in the face.”

That’s the lament of a 210-pound defensive end. Lincoln said rugby players were mostly his size in college and he could work them over for an entire game. You can’t do that with all the pads worn by an offensive lineman.

“I had a few offensive guards hit me as they turned the corner,” he said. “They got under my pads, lifted me and put me on my back. Football was no longer any fun.”

My tendency in fly fishing is to dead drift a midge, no matter the river or the flows. You can do that in stretches of the Colorado River. I frowned when Lincoln suggested at the launch to try stripping an 8-inch streamer.

Daniel pointed me to the front of the boat when that method was mentioned. He said: “My shoulder won’t hold up. You do it. I’m going to nymph fish.”

My shoulder and some herniated discs in my neck don’t like the wear and tear of streamer fishing either, but I got interested when a 25-inch brown followed “half of a chicken” back to the boat on my first retrieve. That’s what Lincoln called my streamer, a double wad of white feathers on either end of two hooks.

“Clay, I see that you are plenty good with that streamer and that’s going to work if you’ll stay at it,” Lincoln said.

Boom, a 16-inch brown was hooked and in the net on the second retrieve, another close to 20 inches on the fourth and lots more the rest of the day. Immediately, I forgot about the wear and tear throwing heavy line would put on my weak, 66-year-old joints.

That was a fun day, but it would get better after Daniel handed me off to Gage for Day 3. We met in Walden, a cow town just a streamer cast south of the Wyoming border. 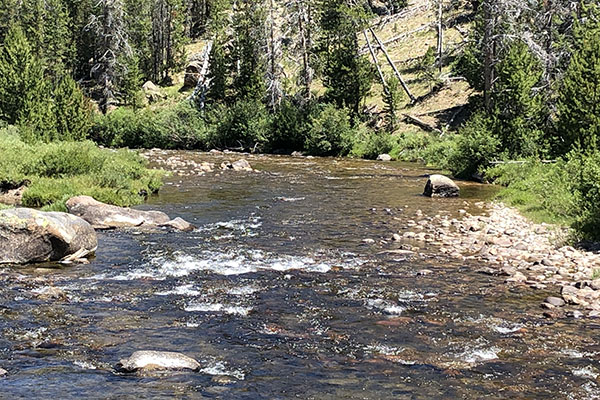 The Encampment River is shown below Hog Park Reservoir.

We shared a room in the Antlers Inn for three nights, with no other guests in the historic hotel. Gage had already plotted a trip 40 miles north of the border to the Encampment River.

I was not so sure until he said the Encampment flows from Hog Park Reservoir and no one would be there. It’s 36 miles on a forest service dirt road at about 9,000 feet.

Oh, yeah, and it’s going to be all dry fly fishing. We’d catch 10-inch browns and brookies all day on hopper or green drake flies. Yes, I'd do that.

It was as advertised. I knew it was the real deal when the top guide at North Park Anglers Fly Shop smiled when Gage wondered aloud if the Encampment had the right flows.

“I don’t know anyone who has been up there of late, but it’s just about the right time in the summer to hit it right,” Scott Graham said. “I’d for sure do that.”

Graham has been working for North Park Anglers since 2003. I met him on my first trip to the North Park area over one decade ago. He’s as golden as a fall aspen. We quickly bought Wyoming fishing permits.

No big fish were caught, but the action was terrific. Gage and I combined to land over one dozen fish. We would have caught more but some of the smaller trout couldn’t open their mouths wide enough to eat a hopper. They would strike and knock them into the air.

We giggled about the beauty of the stream, the fish and the rich blue of the sky. I’m reminded of what I heard as a kid about fishing for trout: they live in gorgeous places. There is no place more beautiful than the headwaters of the Encampment.

After a massive chicken fried steak (yes, drowned in gravy) at the Antlers Inn, the next day Gage and I drove to Buffalo Pass. The gate to an alpine lake was closed. There were still snowdrifts on the 5-mile path to a lake that was probably stocked by plane in late June.

We re-traced our path down the mountain to a trail head adjacent to Newcomb Creek. The snow melt has long since faded in that drainage that spills into the North Platte. Daniel took me on that trail years ago. It's still a gorgeous place.

We fished it and I caught a small brookie that ended up as the only fish of the day. I got blanked later that day in the North Platte and on North Delaney Lake while night fishing. It's part of the three-lake chain near Delaney Butte.

Gage’s kayak was towed by a 10-pound brown in the gold medal water of the Butte's north lake, where Colorado Parks and Wildlife keeps brood stock for the eggs that go to their hatcheries. The stars are bright enough in that thin air that a 30-inch fish saw Gage when it tired near the kayak. It dove to the bottom, snapping 15-pound tippet.

Sound travels incredibly well in the dark, or maybe your senses are just better. I can’t print what Gage said – and it was clear from 300 yards away – when that fish splashed water into the kayak it had towed for 15 minutes.

The final day on the trip from Walden to Gage’s house included a two-hour stop to fish.  We drove to Loveland along the beautiful Poudre below Cameron Pass and just above the state hatchery. We parked just off the highway in a spot most would pick just a few feet away from a beautiful stretch packed with brown trout hungry for hoppers. 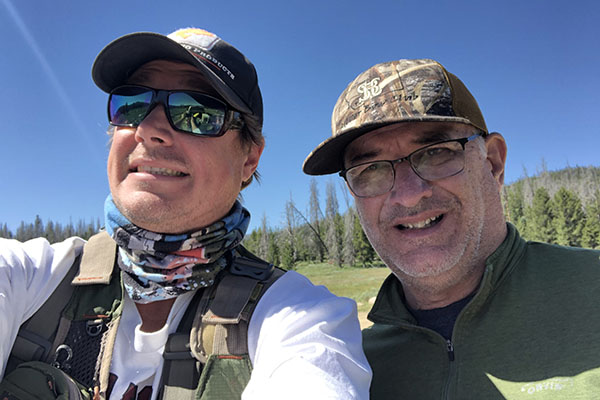 Jeremiah Gage (left) and Clay Henry during a July 2020 fishing trip in the Rockies.

With the fishing over, I didn’t think it could get any better. But somewhere just before the turn at Fort Collins, Gage asked me for some of the favorite meals I’ve cooked this summer. When I mentioned steak and grits, his eyes lit up.

“Would you like shrimp and grits made with hog jowls I brought back from Arkansas?” he asked.

Ozark, where Gage grew up, has never produced a finer chef. Gage has remodeled his Loveland home with an open kitchen. You can sit at the bar and watch him slice and dice.

“Fisherman Clay, I got another one,” Wyatt said. “I’m going to fill up the freezer!”

I didn’t tell Wyatt that his dad and I practice catch and release. Trout need to be left in their homes, the most gorgeous places in the world. 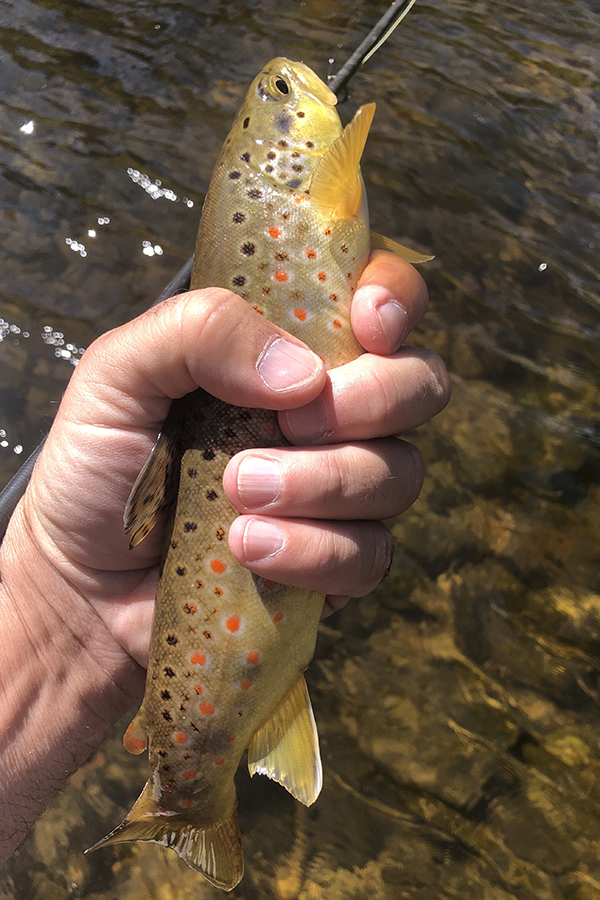