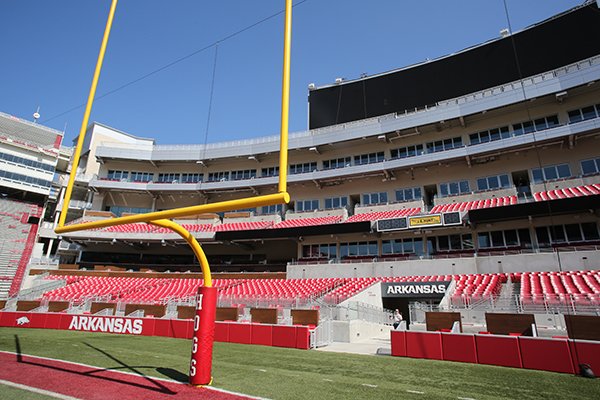 Hunter Yurachek has come down on his odds of there being a full football season to 50-50.

The University of Arkansas athletic director is probably really close because we may very well be in the peak of the coronavirus outbreak.

At least we can hope.

There are so many moving parts to making the decision to play on, but there are some things that seem certain:

(A) Bringing the athletes back to campus was a good idea. There have been some campus cases of the virus. The UA had about 10 but only had one in quarantine earlier this week, meaning the others recovered from covid-19.

During the early stages of this virus, with uncertainty everywhere, the athletes needed to be home with family.

Now, they don’t. In fact, they should not visit grandparents until after the season.

If athletes are tested 72 hours before every game, there should not be widespread contamination.

(B) All the conferences are relying on expert medical advice.

(C) Five conferences have decided to postpone their fall sports until the spring.

All in all that’s a good idea for them and maybe football fans.

If the rest of conferences do have a football season this fall, the fans would then get to have more football in the spring.

That could bring greater exposure to those leagues.

(D) ESPN and all its lucrative contracts plays a role in decision making, but the most powerful entity in college sports does not, nor does it appear to want the final decision.

(E) The SEC, Big 12 and ACC are counting on the number of coronavirus cases to start dropping, and they might with mask referendums in place in many places and the Fourth of July play dates now in the past.

(F) This virus loves people my age more than those younger.

(H) If the numbers drop significantly in the next three weeks, college campuses should be open for students, too.

(I) Lastly, a football season, even a shortened one, can salvage a tough year.

If football is played, there will be major changes for the media.

Not only will there be a significant reduction in fans — if fans are allowed — but the sidelines where the teams gather will most likely be lengthened to run from the 15-yard line to the 15-yard line so players, coaches and medical personnel can have some distancing.

That will mean less room for photographers from all forms of the media.

The press box will change, too.

CoSIDA, an organization of sports information directors, and the officers of Football Writers Association of America, with more than 1,200 members, have been in discussions.

They are looking out for all the media and no stone is unturned.

For instance, there is usually a press box meal that, while not always great (especially at Arkansas), was generally on a self-serve basis.

The self-service will be gone and prepared meals supplied, maybe at a price.

Of that 50, it seems 25% will go to visiting media and the rest to regular beat and national writers.

More than likely, a visiting media outlet will be allowed one photographer.

However, for years the media has had exclusive access to timely statistics, and that will continue as well as press conferences broadcast just for the media who didn’t make the cut for a press pass.