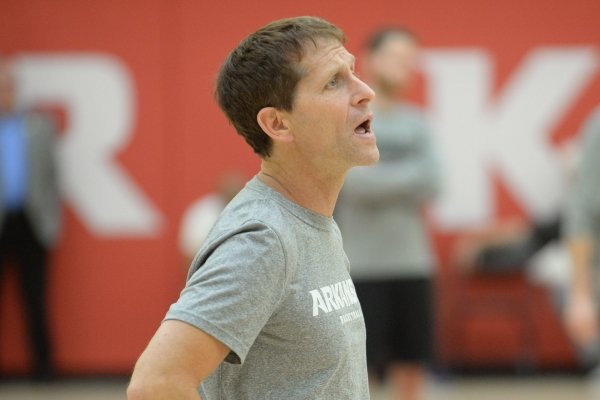 Arkansas coach Eric Musselman directs his players Thursday, Sept. 26, 2019, during practice in the Eddie Sutton Gymnasium inside the Basketball Performance Center in Fayetteville. Visit nwadg.com/photos to see more photographs from the practice.

The Bucks are a good team to borrow from offensively considering they're averaging an NBA-high 118.6 points and have a 53-12 record.

Musselman, a former NBA head coach with Golden State and Sacramento and assistant with Minnesota, Orlando, Atlanta and Memphis, said he and his staff have made learning about Milwaukee's offense a priority since the season ended in mid-March because of the coronavirus pandemic.

"Our big study has been Milwaukee's offense," Musselman said. "We spent a lot of time on it and broke down every aspect of it. I think it's really going to help us."

The Bucks are led by 6-11 Giannis Antetokounmpo, who is from Athens and nicknamed "Greek Freak" because of his combination of skills and size. He's averaging 29.6 points and 13.7 rebounds per game this season.

"I wish we had the 'Greek Freak,' " Musselman said laughing. "That would make the offense a lot better.

"But I liked how we really dove into it the first week."

Musselman said the Razorbacks can benefit from how the Bucks use 7-0 twins Brook and Robin Lopez to run the floor. Arkansas will have 7-3 Connor Vanover eligible this season after he redshirted as a transfer from California.

Another aspect of the Milwaukee offense Musselman likes is how the Bucks' use what he called hybrid forwards – players who can work at the small forward and power forward spots.

After 6-6 Adrio Bailey was Arkansas' tallest starter in most games last season as a senior, the Razorbacks have seven players 6-7 or taller.

Among Arkansas' newcomers are two senior graduate transfers with 6-9 Vance Jackson from New Mexico and 6-7 Justin Smith from Indiana.

"I really like how Milwaukee's forwards are interchangeable as threes and fours," Musselman said of small and power forwards. "I think of Vance and Justin being those same kind of hybrid forwards we can use the way [the Bucks] use their guys.

An extensive study of the Bucks' offense was made easier because Musselman knows so many of the staff members personally.

Musselman is a friend of David Mincberg, who was the Bucks' director of strategy for three years before recently being hired as the Detroit Pistons' assistant general manager.

Peter Herman, an operations intern with the Bucks, was a graduate assistant for Musselman at Nevada.

"There are a lot of connections with Milwaukee's organization, which made it easy for us to follow what they do, and then follow up with questions," Musselman said.

The Razorbacks didn't do any live contact last week, Musselman said, but he was impressed with the drill work, especially the shooting by Jackson.

"Vance really shot the ball incredible," Musselman said. "I think one day he was 70 of 79 from three."

Musselman also liked what he saw from Smith.

"Justin had an incredible week," Musselman said. "We feel like since he's been here on campus, his shooting has really improved in a very short time frame."

Isaiah Joe, a 6-5 guard who averaged 16.9 points last season for the Razorbacks, didn't practice last week as he continues to decide whether to keep his name in the NBA Draft or return to Arkansas for his junior season.

Musselman said Joe attended one of the practices last week to watch.

Joe, who put his name into the draft as an early entry in April, has until Aug. 3 to withdraw and retain his college eligibility.

"We support Isaiah while he's trying to focus on the NBA right now," Musselman said. "He's gathering as much information as he possibly can to make the best decision regarding his future."

Without Joe at practice, the player with the most experience at Arkansas is guard Desi Sills, who will be a junior.

"Desi's the guy that we've had at the front of the line for every drill," Musselman said. "He's been that leader for us.

"He's a guy that everybody's looking to as far as what spots to be in, especially defensively, and he's been very vocal, too."

Musselman said he was pleased by the play of the Razorbacks' four freshmen: guards Devontae Davis, Moses Moody and KK Robinson and forward Jaylin Williams.

"The freshmen did well, and all of them are always in the gym in off hours," he said. "Probably the thing I've been most impressed with them about is their communication.

"They're more verbal than most freshmen. They're picking up our terminology."

Musselman said the coaches and support staff have been careful to use social distancing with the players as much as possible and wear masks.

"Anyone in the building or on the floor – other than the players – is wearing a mask," Musselman said. "I think we've done a great job keeping everyone safe.

"Knock on wood, we haven't had anybody test positive [for the coronavirus], and we've had guys on campus for almost four weeks now."

NCAA rules allow for teams to practice four hours a week this offseason. The Razorbacks went for an hour each Monday through Thursday last week. Musselman said they might go 45 minutes today through Friday this week.

"We felt like we got a lot accomplished the first week," Musselman said. "Practice was moving at a way quicker pace than what we thought it would with all the new faces. I thought they did a really good job of picking things up, of getting to the stations quickly.

"Anytime you implement a new transition offense, it takes time. But we're probably a day-and-a-half ahead of where we thought we'd be after four days."