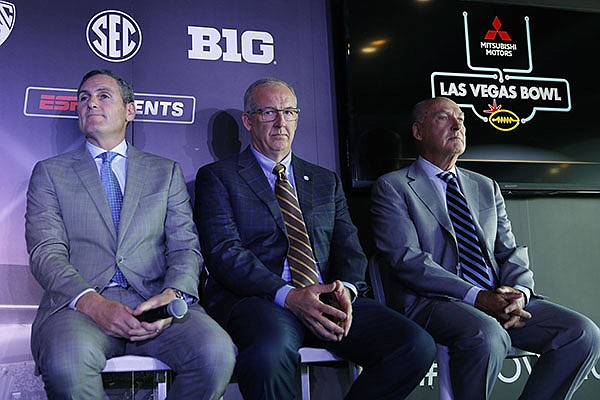 Plans for the college football season — if it is played — should start coming into focus this week.

They will trickle down from the top of major college football, with Power 5 conferences putting in place revised schedules they hope will make it easier to manage potential disruptions brought on by covid-19.

The Power 5 commissioners talked a lot in the spring about the importance of collaboration and trying to launch the season together, with all of the Football Bowl Subdivision acting in unison. The way things are heading, that appears to be out the window.

Here’s where each conference stands with the first scheduled college football games about a month away.

The ACC will play an 11-game schedule that would include 10 conference games and start Sept. 12. The headline-grabber is that Notre Dame, which normally plays five or six ACC teams per season, will be a full conference member for this season. The Fighting Irish have never played in a football conference before.

The first conference to announce it would play only conference games. The assumption/speculation has been that the Big Ten would add another game to its existing nine-game schedule to get to 10 and have that in place before the end of July, but the conference has been typically coy about when it will reveal its plans.

The Big 12 has been the conference most publicly determined to try to play all its games. “We decided a long time ago that if we were going to go away from our regular schedule that we would need to be forced into it by the circumstances, by the situation that was there,” Big 12 Commissioner Bob Bowlsby said. “And so far we haven't been forced into it.”

Instead of delaying the start of the season, the Big 12 is taking the opposite approach, moving the start up to create more open dates for potential makeup games. Kansas has scheduled Southern Illinois (a replacement for another Football Championship Subdivision school) for Aug. 29. Oklahoma also pushed its game against Missouri State to the so-called Week Zero. There have been reports that TCU will play on Aug. 29 against UNLV in the first game at the new NFL stadium in Las Vegas. Both the Horned Frogs and Rebels had games against California canceled when the Pac-12 scrapped nonconference games.

The Pac-12 went conference-only a couple of days after the Big Ten, but it said it would deliver a new schedule by July 31. The San Jose Mercury News reported last week the Pac-12 is expected to go with 10 games and start on Sept. 19. That kickoff date could be moved back as far as Oct. 3 if state restrictions enacted to stem spikes in covid-19 cases force Pac-12 teams to delay the start of preseason practice.

SEC athletic directors left an in-person meeting with Commissioner Greg Sankey in Birmingham, Ala., a couple of weeks ago with a few scheduling models on the table. Conference-only games never made sense for the SEC (or the ACC and Big 12). Why prevent Georgia, Florida, Kentucky and South Carolina from playing in-state ACC rivals? Auburn also is scheduled to play North Carolina from the ACC in Atlanta. The SEC could add a conference game to its eight-game slate. There has also been talk within the league of letting teams play as many nonconference games as they can to try to get as close as possible to a full 12-game season. The Big 12 is taking this approach, too. The SEC's final decision could linger into next week.

It is not entirely fair to lump the American Athletic Conference, Mountain West, Mid-American Conference, Conference USA and Sun Belt together, but the fact is all are at the mercy of the Power 5 in some way.

The Big Ten and Pac-12 already have left holes all over Group of Five schedules and potentially in budgets. Many of those canceled nonconference games came with big paydays for the smaller schools. The MAC lost 11 games against Big Ten teams. The Mountain West is out 13 games, some of them home games, because of the Pac-12's decision.

With the ACC heading toward dropping most of its nonconference schedule, a bunch more G5 teams are going to be out of luck. Big 12 and SEC teams might fill a few holes, but most likely they will have to turn to each other and FCS schools if they want to play more than conference games. Same goes for the independents not named Notre Dame such as BYU.

But is it worth it? Playing just conference games could save a bunch on travel costs. Those buy games against Power 5 teams often fund a big chunk of the rest of the season. If that goes away, some G5 schools might not be able to afford to play a full schedule. Same goes for FCS.