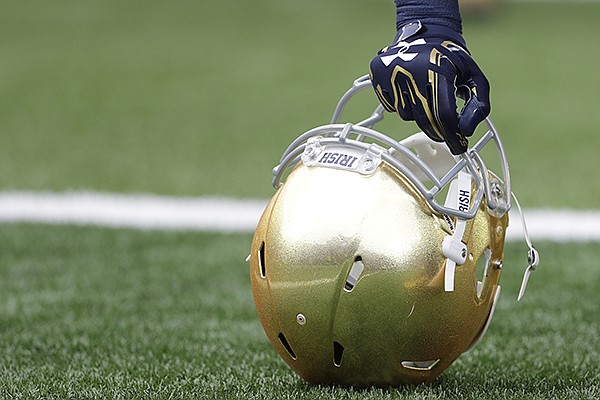 A Notre Dame player holds his helmet after running onto to field before an NCAA college football game Saturday, Oct. 29, 2016, in South Bend, Ind. The Fighting Irish are scheduled to play Arkansas in 2020 and 2025, the first meeting between the programs, part of a scheduling strategy implemented by Notre Dame's longtime AD Jack Swarbrick. (AP Photo/Darron Cummings)

FAYETTEVILLE — Notre Dame will play as a member of the ACC in the upcoming football season, but the possibility still exists the Fighting Irish will play their game against Arkansas on Sept. 12.

The ACC will allow its teams to play 11 games in the upcoming season — 10 against conference opponents and one against a nonconference team. The ACC will require the nonconference game be played in a state that includes an ACC program.

That leaves open the chance Notre Dame could host Arkansas in South Bend, Ind. The Fighting Irish also have a scheduled home game this season against Western Michigan from outside the ACC.

Notre Dame, which competes as an ACC member in most sports, has long valued its status as a football independent, but its schedule had been thrown for a loop after the Big Ten and Pac-12 announced their members would not be permitted to play teams from outside their conferences this year. The Fighting Irish were scheduled to play Wisconsin from the Big Ten, and Stanford and Southern Cal from the Pac-12 this year.

If the Arkansas-Notre Dame game is played as scheduled it would be the season opener for the Fighting Irish. The ACC will not permit its members to begin their season before Sept. 7.

The SEC has yet to establish its scheduling protocols for the upcoming season, but Sports Illustrated reported Wednesday the league is considering a 10-game schedule that would only include games against opponents from within the conference.