'He can do so much more': Talented Williams still has room to grow 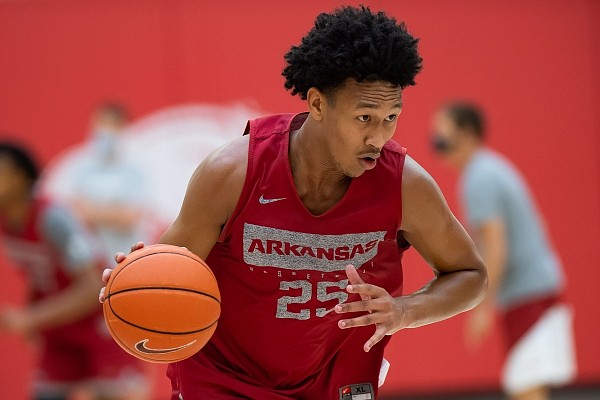 Photo by University of Arkansas Athletics

Arkansas freshman forward Jaylin Williams dribbles the ball up the floor during a team practice in the program's Basketball Performance Center. A standout at Fort Smith Northside, Williams is part of the Razorbacks' 2020 recruiting class that is ranked No. 5 by ESPN.

FAYETTEVILLE — Jaylin Williams has done his fair share of growing up since his sophomore year at Fort Smith Northside High School.

Eric Burnett, the two-time state championship coach of the Grizzlies, admits his relationship with his forward wasn’t always simple. Burnett pushed the then 6-foot-5 Williams on a daily basis early in his prep career, and he didn’t care for it much.

They bumped heads — a lot.

“At the time, kids don’t understand I have their interests at best and they don’t want to go that extra mile sometimes, like when we have running at the end of practice,” Burnett told WholeHogSports. “They get mad or frustrated.

“Just like Isaiah (Joe), he got pushed, especially when he was a sophomore.”

Two years and one Class 6A state title later, Williams expressed to Burnett his appreciation for that tough love prior to last Christmas. Williams, who went on to be named the 2020 Arkansas Gatorade player of the year, wrote his head coach a letter to simply say, "Thank you."

“He just reached out and basically said, ‘Coach, as a sophomore there were many times I thought about leaving, but I didn’t because I knew this was the right place for me,’” Burnett added. “Sometimes kids can see that and think I’m picking on them all the time. He did know that I wasn’t going to cut him any slack.

"When he started performing and playing really well, he looked back on that and reflected and wanted to say thanks. When a kid has been pushed, later on in life, whether it’s basketball or on the job, it gives you some confidence to make it through things.”

Northside’s title run in 2018-19, Williams’ junior year, was keyed by his proactive approach in the weight room from August until the beginning of the Grizzlies’ season in mid-November. Burnett told Williams what was to come that season: Constant body blows, and never-ending attention.

His upper-body strength had to improve. He listened, and before long was putting up 215 pounds in the bench press.

“I’ve got to give him credit for believing in me and listening to me when I told him that,” Burnett said. “That allowed him to go out and have some success. It was every time he caught the ball.

"Sometimes he’d have 4-5 guys on him, sometimes they’d zone him."

Northside did not enter the 2019 state tournament as a favorite. The Grizzlies were 17-11 and the No. 4 seed in their own conference. But after narrow wins over Bentonville West, rival Fayetteville and a double-digit victory over Conway, the program needed one more win to capture its 11th championship.

Only Bryant stood in Northside’s way. And Williams put on a show in the finals, finishing with 20 points, 16 rebounds and three blocks, leading his team to a thrilling 44-41 win.

For the season, he averaged 16 points, 11 rebounds and three blocks per game, earning All-State honors and Division I Player of the Year recognition from the Northwest Arkansas Democrat-Gazette. Williams had firmly established himself as one of the best in the country at his position.

As a senior, Williams and Northside’s title defense ended sooner than expected. They were upset by 4-seed Little Rock Central in the state semifinals, but the 6-10 forward, who committed to Arkansas last November over Auburn and Oklahoma State, was dominant, adding 18.7 points, 12.2 rebounds, 2.7 assists and 2.5 blocks per outing.

He reached double figures in scoring in all but one of the Grizzlies' games.

“This kid is really talented. He can shoot the 3 and stretch the floor, he’s a great rebounder and he’s a good passer,” Burnett said. “As a sophomore, I had to tell him to quit passing the ball. He was always wanting to make a pass to somebody, but toward the end of the year I would get mad at him and say, ‘The heck with passing that ball. You’re right there. Go get us two points.’

“As a junior, he turned it on and started doing that, and then it led on into his senior year.”

Burnett watched Williams mature leaps and bounds mentally throughout his high school career. Now at Arkansas as part of a top 5 recruiting class, Williams might not be done growing physically. He currently stands 6-10, 245 pounds, per the Razorbacks’ updated 2020-21 roster.

The Williams family, according to Burnett, has been told by a doctor he could shoot up to 7-1.

Arkansas coach Eric Musselman, who noted the freshman had a really good first week of practice with the Razorbacks, says Williams’ ability and willingness as a passer makes him an even more intriguing player.

“He has great court vision,” Musselman said. “We feel like he can play a few different positions. We don’t think that he’s a one-position player. He possesses a well-rounded skillset. Jaylin is well-coached.

"He is one of those rare players who can go get a defensive rebound then use his ballhandling ability to bring the ball up the floor.”

Burnett believes, too, Williams’ experience on the AAU circuit was beneficial for his confidence. He sensed Williams felt like the guy each time he stepped on the floor for the Grizzlies.

Similarly to Joe in 2018, the coach is eager to watch Williams, who will wear No. 20 next season, compete on a national stage.

“Jaylin is smart. His IQ is really high. He’s just a smart player,” Burnett said. “He can do so much more than he did with me. Being with Coach Musselman and them, they’re going to take him to another level.”