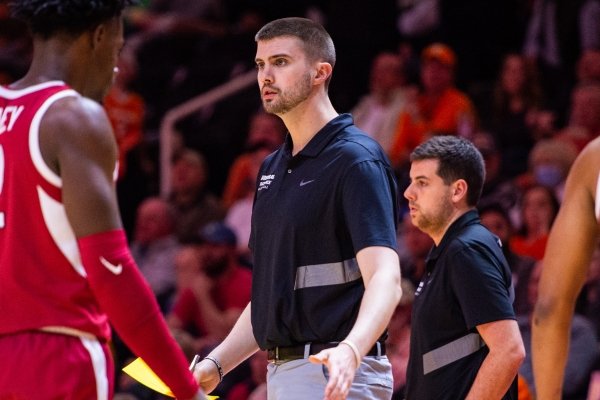 Photo by University of Arkansas Athletics

Arkansas Razorbacks recruiting coordinator Pat Ackerman is shown walking on the floor during a road game during the 2019-20 season.

FAYETTEVILLE – Barber shops and hair salons in Arkansas reopened on May 6, but Pat Ackerman remains the go-to guy for Eric Musselman.

Ackerman is the recruiting coordinator for the University of Arkansas men’s basketball program, but after the coronavirus shut down non-essential businesses in late March he became the staff barber, too.

“I can get back to a true barber, but Pat Ackerman did an incredible job for two and a half months cutting my hair,” Musselman, the Razorbacks’ head coach, said on a Zoom call with reporters July 1. “I would say if anybody needs a free haircut, come up to our office and Coach Ackerman can get you right.”

Ackerman had some fun with Musselman’s answer on Twitter.

In a response that opened with a sound byte of Musselman’s comment, Ackerman tweeted, “FREE!? I’m going to have to talk to @EricPMusselman about that …”

Musselman said he has been to a professional barber shop only once — three weeks ago — since March and that Ackerman most recently cut his hair last Friday.

“Pat does a great job,” Musselman said. “The guy can start charging for haircuts.”

Anthony Ruta, the Razorbacks’ director of operations, was the first member of the basketball staff to have his hair cut by Ackerman.

“One day Ruta was just talking about, ‘I need a haircut,’ ” Ackerman said. “I told him, ‘Well, if it’s just a buzz – if you don’t need anything outside of that – I’ve got clippers.’

Ruta said he was pleased with the result.

“I think the settings on Pat’s clippers go from 1 to 8, from shortest hair to longest,” Ruta said. “My hair’s a 1, so that was no problem.”

When Musselman learned Ackerman gave Ruta a haircut, he wanted one, too.

“Muss started asking me, ‘Can you cut mine? Can you cut mine?’ ”Ackerman said. “I don’t know how many times I had to say, ‘No,’ because I didn’t want to be the reason that he then was upset with me for a bad haircut.

“I said, ‘Coach, I don’t cut hair the same way they do at Super Cuts or wherever you go.’ ”

Musselman persisted like he wants the Razorbacks to play defense.

“I trimmed it and he seemed to be happy with it. Then it was probably about a week later when he said, ‘Do you have your clippers with you?’ I said, ‘I think they’re still in my car.’ He said, ‘Can you just give me a full haircut?’

“I tried to say no I don’t know how many more times.”

“I knew he had Instagram live events scheduled with our signees, and he was going on every podcast and giving all these interviews on camera,” Ackerman said. “I didn’t really want to be the reason for someone asking him, ‘Where did you get that awful haircut?’

“Fortunately, it turned OK. There was no blood, no nicks, no scratches on the neck. We made it out of there unscathed.

“Muss told me he was pleased. Now, whatever he went home and told [his wife] Danyelle afterwards, I may never know.”

For the record, Danyelle Musselman said she has no complaints about Ackerman’s hair-cutting skills.

“I much prefer that Pat cuts Eric’s hair than Eric asking me to do it and I mess it up,” Musselman said. “Pat did a good job.

“I mean, Eric doesn’t get the most high-end haircuts. We’ll just say that. It wasn’t too far off what he normally would get.”

Michael Musselman, Eric’s son and Arkansas’ director of recruiting, approved of the job Ackerman did.

“All he needs to work on is cutting the front a little bit. He struggles out front, but around the back and the top, he’s pretty dialed in.

“Pat is the Swiss Army knife of Arkansas basketball. Whatever position you put Pat Ackerman in, he will find a way to succeed. That’s including haircuts.

“He might need to go to beauty school, but he’s better than some of the stylists I’ve had.”

Ackerman said he got his clippers as a college player at Detroit Mercy from a woman who cut his hair when he was younger and lived in Massachusetts.

“This woman gave the clippers to my mom one time and said, ‘Hey, I’m getting rid of these, I’m getting new ones, just give these to Pat and he can use them in the dorm room or wherever,’ ” Ackerman said. “So I’ve had these clippers for a long time.”

“Jermaine was our team barber basically when we were in college,” Ackerman said. “He’d knock out four or five haircuts at once. He was actually pretty good.”

Ackerman said his fiance, Victoria Sollestre, has been cutting his hair the last few months.

“She’s done really well,” he said. “It has looked great to me. Nobody has asked me what happened to my hair, so that must mean it was a good haircut.”

Musselman said he doesn’t know why Ackerman was so reluctant to give him a haircut.

“It’s pretty hard to screw up my hair,” Musselman said. “I don’t brush it or anything.

Ackerman has been plenty good enough as far as Musselman is concerned.

“I’ve gotten a couple free lunches out of it, too,” Ackerman said. “So I’ve stopped working for free.”