Notae, Iyiola out due to injuries 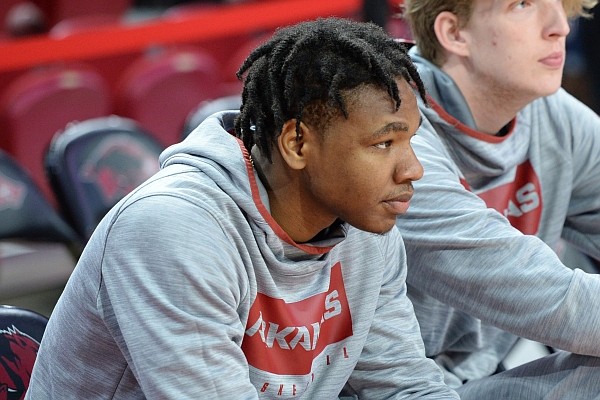 Arkansas Friday, Feb. 21, 2020, Missouri during the second half in Bud Walton Arena in Fayetteville. Visit nwaonline.com/uabball/ for a gallery from the game.

JD Notae, a 6-1 redshirt junior guard who transferred from Jacksonville and sat out the 2019-20 season, injured his left wrist and has been wearing a cast. He will be able to return to practice in 2-3 weeks.

Notae is expected to play a key role in Arkansas’ backcourt this upcoming season. Members of the Razorbacks’ coaching staff have said since the end of last season that they witnessed an uptick in Notae’s confidence, strength and perimeter shooting during his development year.

He averaged a team-high 15.5 points, 6.2 rebounds and 3.4 assists per game and was selected to the All-Atlantic Sun Conference second team in his final year with the Dolphins. As a freshman, Notae was named the conference’s freshman of the year.

Stetson transfer Abayomi Iyiola, who also sat out the 2019-20 season, will miss extended time after tearing the ACL in his right knee. The 6-9 forward will be out for 5-6 months.

Iyiola, named to the ASUN All-Freshman team in 2017-18 after averaging 10.1 points and 6.2 rebounds per game, has been characterized by Musselman in the past as a utility player of sorts who provides energy. He then led the Hatters in scoring (10.8), rebounding (7.6) and blocked shots (37) the following season.

Both players’ injuries occurred prior to the start of team activities.