Like old times: Keuchel, McCann happy to be reunited in Chicago 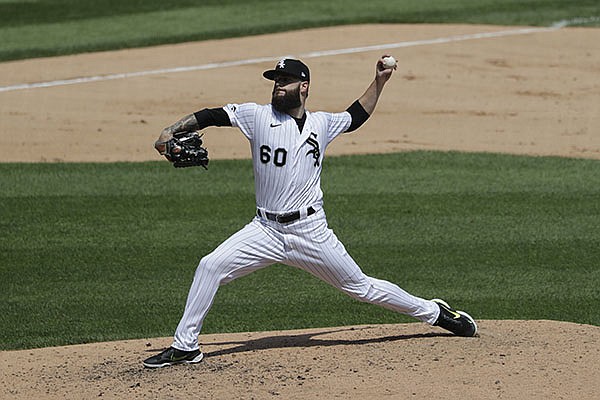 FAYETTEVILLE — When Dallas Keuchel threw an 85 mph sinker into the glove of James McCann last Saturday, it was the first time they had recorded an official pitch and catch to one another in more than 11 years.

The last time they had played in a game that mattered, it was one of the most memorable nights in Arkansas baseball history. Keuchel, the Razorbacks’ No. 1 starter, came out of the bullpen to pitch four scoreless innings as Arkansas rallied to defeat Virginia 4-3 in 12 innings at the 2009 College World Series.

Keuchel was a junior and McCann was a freshman on Arkansas’ national semifinalist team that season. The game against Virginia was the last in which Keuchel pitched for the Razorbacks, who were eliminated two days later by national champion LSU.

“It’s fun to look back and see where guys’ careers have taken them,” McCann said of a team that also included big leaguers Drew Smyly, Mike Bolsinger, Brett Eibner and Andy Wilkins. “It’s a testament to the coaches there — Coach (Dave) Van Horn, and at the time we had (Dave) Jorn and (Todd) Butler — and the recruiting, the number of big leaguers that have come from Arkansas.”

Now reunited as members of the Chicago White Sox, Keuchel and McCann are believed to be the first all-Razorback battery in Major League Baseball, according to Phil Elson, who is the radio voice of Arkansas baseball.

Not many Arkansas catchers have made it to MLB, and McCann’s seven MLB seasons with the White Sox and Detroit Tigers are believed to be the second most by any Razorback catcher, behind Tom Pagnozzi’s 12 seasons with the St. Louis Cardinals.

Keuchel has also enjoyed a long career. In nine seasons, Keuchel has won the 2015 American League Cy Young Award, been named to two All-Star teams and won four Gold Gloves. In 2017, Keuchel was a member of the Houston Astros’ team that won the World Series.

The Arkansas Democrat-Gazette recently ranked Keuchel No. 2 and McCann No. 8 on a list of the greatest Razorbacks to play professional baseball.

When Keuchel left Arkansas it would have been difficult to envision him and McCann playing together more than a decade later. Keuchel was drafted by the Astros in the seventh round and his velocity was a concern for some scouts.

“He made some changes once he got to pro ball that made him who he is today,” McCann said. “He developed a cutter and all his other pitches got better. It's really a testament to him and all the work he’s done to get to where he is today.

“He didn’t have overpowering stuff. It may offend him to hear me say that, but he knows that. He’s not a lefty throwing 96, 98. He’s a guy that hits his spots. He throws 92 and he doesn’t miss spots.

“Seeing a guy like him have the success he’s having in a game where there’s a lot of emphasis placed on velocity, it’s great to see.”

Because both players have spent either all or the majority of their careers in the AL, their paths have crossed several times. In 2016, Keuchel hung an 80 mph pitch over the plate and McCann crushed it for his first career grand slam that capped a six-run first inning in an 11-0 Tigers victory over the Astros.

“It was special because it came off of him,” McCann said. “I think I had a text message after the game that said, ‘You’re welcome,’ or something along those lines. I’m sure he wasn’t very happy about it during the game, but he can joke about it now.”

McCann said he and Keuchel stayed in touch during their careers prior to reuniting in Chicago. They would sometimes go to lunch when the Tigers and Astros were playing against each other.

McCann was 3-for-7 with a walk against Keuchel while they were in the AL. Keuchel pitched for the Atlanta Braves last season but McCann sat out Keuchel's start against the White Sox.

“It’s definitely fun to sit down and reminisce about that time in college,” McCann said. “It makes for a lot of fun conversations.”

In Keuchel’s debut for the White Sox last week he threw 5 1/3 scoreless innings. The two runs charged to him came after he was taken out of the game with runners on base. He earned the win in Chicago’s 10-3 victory over the Minnesota Twins.

He allowed two runs in 5 1/3 innings in another win Friday against the Kansas City Royals.

McCann hit a home run during the game against the Twins. He has homered twice in his three starts this season and has a .500 batting average through Friday when McCann caught Keuchel on the four-year anniversary of McCann’s first career grand slam.

“James is still the same old guy," Keuchel said after last week’s win over the Twins. “Sometimes he'll lull you to sleep with kind of the lack of emotion, but he's kind of like me where the deep down emotion is what carries him to be a great player.”

McCann was an advocate for the White Sox signing Keuchel during the offseason, which they did for three years and $55.5 million.

“I spoke highly of him,” McCann said of his conversations with Chicago’s coaches and front office. “Obviously his career accolades don’t need me to speak highly of him. I was excited when we signed him.

“Just getting back on the field with him in the spring and being able to catch him in games, it’s a lot of fun. I have memories that go back 10-plus years, so just getting to talk about stuff like that, but also to talk through our big-league careers together about what he’s learned and what I’ve learned…it’s been pretty special.”

In March, after the White Sox pitchers and catchers convened for spring training near Phoenix, Keuchel told the Chicago Tribune he hoped it was the beginning of “three, four, five years together” with McCann.

“We’ve officially got the band back together after an 11-year hiatus,” Keuchel said.