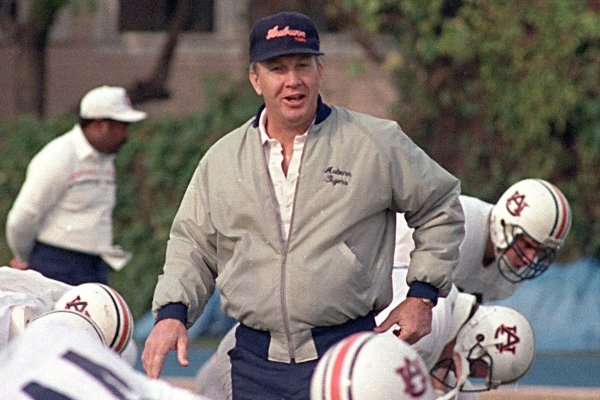 Auburn coach Pat Dye walks through his players as they begin workouts in preparation for the Sugar Bowl in New Orleans, in this Dec. 27, 1988 file photo. (AP Photo/Bill Haber, File)

Former Auburn coach Pat Dye, who took over a downtrodden football program in 1981 and turned it into a Southeastern Conference power, died Monday. He was 80.

Dye's son, Pat Dye Jr., had told ESPN.com recently that the former coach had been hospitalized in Atlanta for kidney-related issues. He also said his father had tested positive for the coronavirus but had been asymptomatic.

When Dye came to Auburn, he inherited a program that was deeply divided after only three winning seasons in the previous six years. In 12 years, he posted a 99-39-4 record, Auburn won or shared four conference titles and the Tigers were ranked in The Associated Press' Top 10 five times.

Dye's overall coaching record was 153-62-5 in 17 years at Auburn, Wyoming and East Carolina.

His coaching career ended in November 1992 when he was forced to resign after a pay-for-play scandal rocked the program, which was placed on two years' probation.

Dye served as athletic director as well as a coach for most of his career with Auburn. He remained associated with the university after his resignation and was a frequent commentator on football talk-radio shows.