NLR leaders unsure how to stop sinkholes at Dickey-Stephens Park 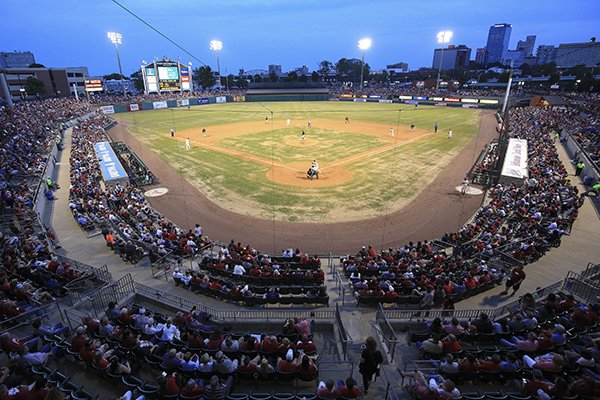 Dickey-Stephens Park is shown during a game between Arkansas and Grambling State on Tuesday, April 30, 2019, in North Little Rock.

Mayor Joe Smith said North Little Rock is paying for choosing beauty over stable ground when officials decided to build Dickey-Stephens Park so close to the Arkansas River, and he isn’t sure there is a viable solution to the sinkhole problems that have plagued the baseball stadium since 2008.

The most recent incident occurred last season, when sinkholes again developed on the home field of the Class AA Arkansas Travelers minor league baseball team after historic flooding along the Arkansas River.

It marked the third series of sinkholes developing on the field since the stadium was completed in 2007. In addition to the Travelers, the Arkansas Razorbacks have scheduled an annual game at the park since 2010.

The city is responsible for repair costs because North Little Rock owns the $40.4 million ballpark through its independent Public Building Authority.

North Little Rock Chief Engineer Chris Wilbourn said the latest sinkholes have been repaired along with structural damage to one of the bullpen retaining walls at the park. He said a contract with Mid-America Sports to make repairs was about $375,000, and officials anticipate 75% of the cost eventually will be reimbursed by the Federal Emergency Management Agency.

Wilbourn said repairs were mostly completed by what would have been the start of the minor league baseball season, but the season’s start has been pushed back because of the covid-19 pandemic.

“There not being any games this year did help a little,” Wilbourn said.

Arkansas Travelers General Manager Paul Allen has said the sinkhole issues haven’t been a concern for the Seattle Mariners, the Major League Baseball team that serves as the Travelers’ parent organization.

The Travelers are under a two-year contract with the Mariners that runs through the 2020 season, and Allen said Wednesday that the Class AA affiliate hasn’t had any recent conversations with the Mariners about an extension of the deal.

“Right now everybody is just focusing on the potential baseball season,” Allen said.

Last year, heavy rainfall in Kansas and Oklahoma led the U.S. Army Corps of Engineers to release water from reservoirs in both states, which eventually made its way downriver and into Arkansas, leading to severe flooding throughout the Arkansas River Valley and beyond.

During the flooding, four sinkholes appeared on the field during a game. Play was delayed for 23 minutes while members of the grounds crew filled the holes. Another delay of 45 minutes occurred shortly before the start of the next day’s game after sinkholes opened again.

Wilbourn said sinkholes will be an ongoing issue at the ballpark because rising water levels along the Arkansas River will always be a problem.

“If it floods on the river, then we can have the sinkhole issue again,” he said.

After large sinkholes opened on the field near the outfield walls after severe flooding in late December 2015, North Little Rock spent about $450,000 to repair the damage and replace underground drainage pipes. Another $52,000 later went into replacing a waterline and making additional drainage improvements.

Smith said city officials aren’t sure that any solution will work when it comes to the groundwater, but officials have explored the idea of a preventive measure that might help. Smith said officials for a baseball park in South Carolina that had a similar situation built wells outside the park to collect the groundwater and then pumped it back into the river.

“We applied with FEMA to include this in the mitigation plan,” Smith said. “They denied it, but we have filed an appeal.”

Smith was the city’s governmental affairs director at the time the ballpark was being built in 2006-07, and he said designers knew from the start that sinkhole issues were a possibility.

“They knew it was an issue, but the powers that be wanted to be able to walk into the plaza,” he said. “Doing that made the stadium a lot more beautiful and unique, but when you build 12 feet deep a few feet away from the river, then the groundwater can be an issue.”

Designers thought they could work around the issue, Smith said, but the groundwater still found its way to the field. He noted that previous sinkholes appeared in different spots, so the issue might be something the city has to fix one piece at a time.

Wilbourn said sinkholes are particularly challenging during a normal year because crews have to make repairs in a short time in the offseason.

“One of the main reasons projects we have at Dickey-Stephens pose challenges is because you have to get work done in between seasons,” he said. “This year, we didn’t have that.”