This Week in Razorback History 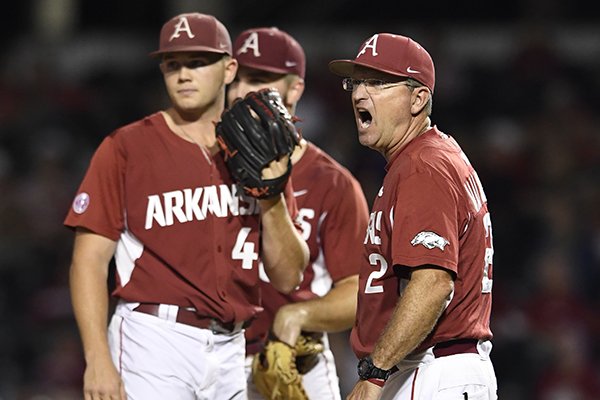 Gee, speaking to the Ohio State athletics council Dec. 5, the day after Bielema left Wisconsin to take the Arkansas job, said Wisconsin Athletic Director Barry Alvarez thought Bielema was “a thug” and that Bielema left “just ahead of the sheriff.” The remarks became public several months later when The Associated Press obtained a recording of the meeting.

Gee apologized directly to Bielema, who posted the apology letter on social media. Alvarez insisted he didn’t say those things about Bielema, who led Wisconsin to three consecutive Big Ten championships over the final three seasons of his seven-year stint with the Badgers.

“As a member of the higher education community, a director of athletics and a native of Ohio, I am deeply troubled by the unfounded and slanderous remarks the President of the state’s flagship institution, Dr. E. Gordon Gee, made about Coach Bret Bielema,” Long’s statement read. “While I recognize Dr. Gee has issued an apology stating regret for his comments, it does not erase the unwarranted attack on Bret’s character.”

The Razorbacks blasted Bucknell 10-0 at the NCAA Charlottesville (Va.) Regional for their 10th and final shutout of the season, tying the 2012 team for the second-most shutouts in school history.

Left-hander Jalen Beeks (6-4) worked the first five innings, while Jackson Lowery earned his first save of the year with four hitless innings in relief.

In their first game at the College World Series in program history, the Razorbacks downed Pepperdine 5-4 at Rosenblatt Stadium in Omaha, Neb.

Infielder Jeff King was taken with the first pick of the Major League Baseball Draft by the Pittsburgh Pirates. King is still the only Arkansas baseball player to have been the first pick in the draft.

An All-America third baseman in 1985 and 1986, King played a central role on the Razorbacks’ 1985 College World Series team, the second in school history.

King was a key cog on powerhouse Pirates teams in the early 1990s, teaming with Barry Bonds, Andy Van Slyke and Bobby Bonilla on NL East title teams from 1990-92. King was traded to the Kansas City Royals in 1997 and finished his 11-year career there with a lifetime .256 batting average, .425 slugging percentage and 154 home runs.

The Razorbacks beat Arizona 10-3 to advance in the winner’s bracket at their first College World Series.

The Razorbacks began a must-win game against Missouri State in the NCAA Fayetteville Regional at 9:10 p.m. and finished off the 11-10 rain-delayed epic six hours later at 3:10 a.m. at Baum Stadium.

Trailing 8-7 entering the bottom of the eighth inning, Arkansas rallied for four runs, tying it on Jax Biggers’ groundout and taking an 11-8 lead on Jared Gates’ two-run home run.

The Razorbacks had a long day at the park after outlasting Oral Roberts 4-3 in an elimination game earlier in the day.

Missouri State would advance to a Super Regional at TCU with a 3-2 victory in the regional final.

Brett Eibner hit three of the Razorbacks’ school-record nine home runs in a 19-7 win over Grambling State in the NCAA Fayetteville Regional.

Eibner went 4 for 5, scored five runs and drove in a career-high seven runs.

All four Razorbacks who hit a home run in the game had multiple homers, as Andy Wilkins, Collin Kuhn and James McCann hit two each among the Razorbacks’ 17 hits.

Wilkins had three hits, while Kuhn, McCann, Bo Bigham and Travis Sample had two hits each.

Kuhn led off the Arkansas first inning with a home run, and Eibner and McCann each had two-run shots in the Razorbacks’ six-run opening frame.

Former Razorback Brenden Pappas won his first Nationwide Tour title, sinking a 25-foot birdie putt on the final hole for a 2-under 69 and a one-stroke victory over Charlie Wi in the Rex Hospital Open in Raleigh, N.C.

Playing two months after his father’s death, Pappas matched the TPC Wakefield Plantation record with a 16-under 268 total and earned $81,000.

“I’ve been dedicated to this, stubbornly, for two months,” Pappas said. “I’ve worked hard and my whole preparation has been around winning. I didn’t do it before my dad passed and that was something that was difficult for me.”

Arkansas’ coaching staff, along with the staffs from Arkansas State and Ouachita Baptist, hosted more than 600 high school football players at a satellite camp at War Memorial Stadium in Little Rock.

“Just to promote our game, to promote War Memorial, to promote Arkansas, those are all positives,” Razorbacks Coach Bret Bielema said. “It’s good for my coaches, too.

“Obviously, when we agreed to do this, I knew the prospects we were going to have our eyes on were going to be a limited number. It does give us a different area, a different location to come over and see some kids that could have a hard time getting to Northwest Arkansas.”

The Razorbacks routed Texas 9-4 to improve to 3-0 at the College World Series and advance to the CWS finals against Cal State Fullerton.

Arkansas golfer Maria Fassi won the Honda Sport Award for Golf to become eligible for the Collegiate Woman Athlete of the Year and the Honda Cup.

The UA graduate and medalist at the 2019 NCAA Championships, Fassi was the second Razorback to win the Honda Sport Award, joining track and field athlete Amy Yoder-Begley in 2000.

“For Maria to win this award, it says a lot about her impact on the college game and on our program here at Arkansas,” Coach Shauna Taylor said in a statement. “From the day I met Maria, I knew she was going to change the game and accomplish so many amazing things. She has been a model student-athlete on and off the golf course [and] winning the Honda Award is just further proof of that. “

Fassi, of Pachuca, Mexico, won the Ping Women’s Golf Coaches Association player of the year honors, finished runner-up at the inaugural Augusta National Women’s Amateur and won her second ANNIKA Award in addition to winning the NCAA individual title in her senior season.

Tori Hoggard capped her college career by winning the pole vault at the NCAA Outdoor Track and Field Championships in Austin, Texas.

“I’ve been waiting for this opportunity for so long,” Hoggard said. “Obviously, I’ve seen Lexi do it four times, and I was really excited to finally get my chance.”

Jacobus, battling back from an Achilles injury, tied for ninth.

“I told Tori it was her chance,” Jacobus said. “It was her meet to go get it. I couldn’t be happier for her.”

Andrew Darr drilled a double to the gap in left-center field with one out in the bottom of the ninth inning to score Bo Bigham and Zack Cox as the No. 16 Razorbacks walked off No. 5 Florida State 9-8 to advance to the College World Series.

Arkansas scored eight runs in the final three innings to overcome a 5-1 deficit to the Seminoles at Dick Howser Stadium. The Razorbacks advanced to their sixth College World Series and their second under Coach Dave Van Horn.

Darr went 4 for 5 with a home run and two doubles and drove in three runs. Bigham for 3 for 4 with 2 RBI. The first seven batters in the Arkansas lineup all scored at least one run.

The Seminoles, trailing 7-5 to open the ninth, scored three runs with two outs to take an 8-7 lead.

The No. 9 Razorbacks swept a doubleheader against No. 8 Wichita State by the scores of 11-9 and 4-3 to storm out of the loser’s bracket and win the NCAA Fayetteville Regional at Baum Stadium.

Brady Toops hit a grand slam in the top of the ninth inning of the first game after the Razorbacks trailed 9-6 to open the inning. Toops went 3 for 5, first baseman Haas Pratt went 2 for 5 with a homer and 4 RBI, while Casey Rowlett, Clay Goodwin and Scott Bridges had two hits each.

The Shockers outhit the Hogs 11-3 in the decisive second game, but committed six errors.

Pratt, who had two of the Razorbacks’ hits in Game 2, singled to open the eighth inning and was replaced by the pinch runner Bridges. Denny Hamblin advanced Bridges with a bunt and he moved up another base on a failed pickoff attempt. Bridges scored on a throwing error by shortstop Nick McCoola.

Charley Boyce (7-2) picked up the win with 7 2/3 innings of relief of Daryl Maday, who allowed two runs in the second inning.

Arkansas scored three first-inning runs and pitchers James Teague, Lance Phillips (2-3) and Zach Jackson made them stand up as the Razorbacks outlasted No. 8 Missouri State 3-2 before a roaring crowd of 11,694 at Baum Stadium to clinch a spot in the College World Series.

Jackson struck out Tate Matheny in an eight-pitch at-bat to finish his 3 2/3 innings and notch his ninth save, then the Razorbacks dog piled around the pitcher’s mound to celebrate the program’s fourth trip to the College World Series during Coach Dave Van Horn’s 13-year tenure.

The Razorbacks broke on top against Jordan Knutson (6-2) on Tyler Spoon’s RBI single, Rick Nomura’s sacrifice fly and Brett McAfee’s single in the top of the first.

The milestone victory came on the birthday of his father, Thomas, and also his parents’ anniversary, with PGA legend Jack Nicklaus in attendance.

Lingmerth, a native of Sweden, played three seasons at Arkansas for Coach Brad McMakin, including the No. 2 spot on the Razorbacks’ 2009 NCAA runner-up team.

Lingmerth fired rounds of 67-65-72-69 and outlasted Rose by sinking a putt from just inside 5 feet on the third playoff hole, the longest playoff at Muirfield Village in 40 years.

Lingmerth had the inside track to win on the first playoff hole with a 10-foot birdie opportunity, but when Rose’s 20-footer trickled in, he had to sink his putt just to extend the playoff.

“I was thinking to myself that I’d probably have a putt to win the tournament right there,” Lingmerth told The Associated Press. “And then he drops it in … and this big, huge roar. Crazy feeling.

“So I took a few moments just to let the crowd and myself calm down because I knew how big that next putt was going to be. I’ve been in a few playoffs. … I didn’t feel that it was my turn to lose this time.”