2 sons commit to play for Crutchfield at East Central 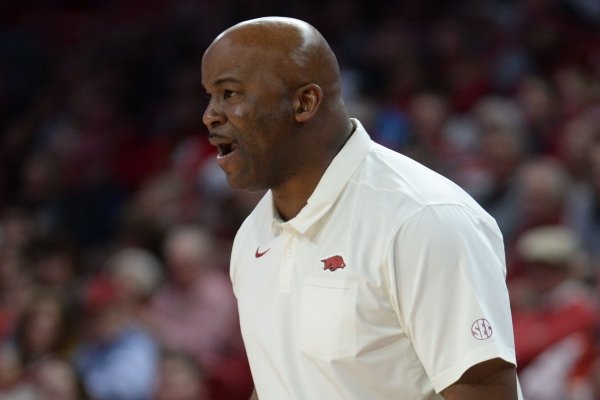 Arkansas associate head coach Chris Crutchfield speaks to his team Friday, Nov. 22, 2019, during the second half of play against South Dakota in Bud Walton Arena in Fayetteville. Visit nwadg.com/photos to see more photographs from the game.

Former Arkansas assistant Chris Crutchfield will coach two of his sons in his new role as head coach at East Central (Okla.).

Josh and Jalen Crutchfield committed to East Central on Tuesday, a day after their father was hired to lead the Division II program located in Ada, Okla.

Josh Crutchfield completed his sophomore season at Stetson and in April announced he would transfer to Central Oklahoma. Jalen Crutchfield was a freshman this year at Northern Oklahoma College-Enid. Both players will be immediately eligible at ECU.

The Crutchfield brothers grew up in Norman, Okla., while their father was an assistant coach for the Oklahoma Sooners.

“Since I was a little kid, it has always been a dream of mine to play for my dad,” Jalen Crutchfield said in a Twitter post. “It feels like now my dreams are starting to come true.”

Chris Crutchfield spent a year at Arkansas as an associate head coach. The ECU job is his first as a head coach since the 2000-01 season at Tyler (Texas) Junior College.

Prior to coaching at Arkansas, Crutchfield had spent 12 seasons as an assistant coach in the state of Oklahoma. He spent eight seasons with the Sooners and was an assistant for four years at Oral Roberts from 2007-11.