Crutchfield to coach in Oklahoma 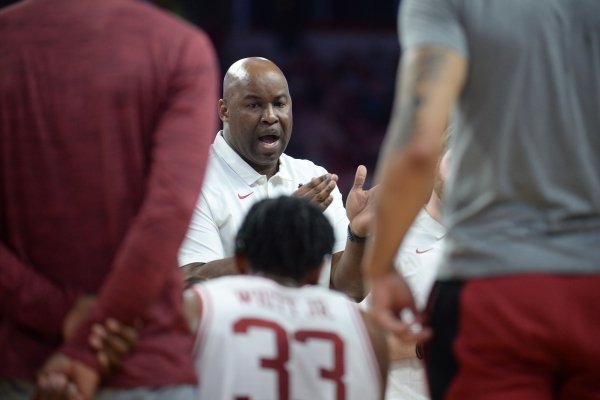 Arkansas associate head coach Chris Crutchfield speaks to his team Friday, Nov. 22, 2019, during the second half of play against South Dakota in Bud Walton Arena in Fayetteville.

FAYETTEVILLE -- Chris Crutchfield is leaving his position as an assistant basketball coach at the University of Arkansas to become head coach at East Central (Okla.) University, an NCAA Division II program in Ada.

Crutchfield was announced as East Central's coach in a news release from the school on Monday. He is leaving Arkansas after one year on Coach Eric Musselman's staff.

"I think I speak for the entire program by saying how happy we are that Coach Crutch has earned this well-deserved opportunity," Musselman said in a statement. "Crutch made a positive impact with our student-athletes and we thank him for helping us lay the foundation for a successful future.

"East Central University is getting a high-quality coach and even better mentor to develop young men."

Crutchfield was an assistant coach at Oklahoma for eight years before Musselman hired him to be on his first Arkansas staff.

"My family and I are excited to impact our students-athletes in a positive way while competing for championships," Crutchfield said. "I can't wait to develop a relationship with our current student-athletes, alumni and the community of Ada.

"My family and I are looking forward to a successful work-life balance at ECU."

"Numerous highly-qualified coaches expressed interest in this job," Williams said in a news release. "Our committee is unanimous that Chris Crutchfield is the right fit for our program and 2020 is the right time for him to lead the Tigers forward.

"Our alumni, fans and campus community will be impressed with Coach Crutchfield as a person and the leadership he will bring to our basketball program."

Crutchfield, a native of Hopkinsville, Ky., played basketball and football at the Nebraska-Omaha and began his coaching career as a football graduate assistant at Nebraska-Omaha after being a juvenile probation worker.