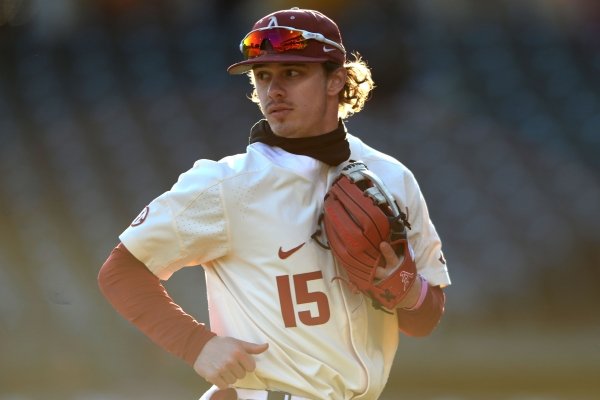 FAYETTEVILLE -- Whether it's playing baseball or musical instruments, Casey Martin is versatile.

Martin played third base, shortstop and second base for the University of Arkansas in two full seasons plus 16 games in 2020 before college sports were canceled because of the coronavirus pandemic.

Martin also can play the guitar, drums and piano.

The Lonoke native showed off his singing and guitar-playing skills in a video posted on Twitter that has drawn more than 160,000 combined views on Martin's account as well as the Arkansas baseball program's account.

On March 17, when the Razorbacks were scheduled to play Oklahoma at Bricktown Ballpark in Oklahoma City, Martin posted a video of himself singing "Heartless."

It's a song written by hip-hop artist Kanye West that has been covered by several other artists including Arkansas native Kris Allen.

Never thought my last games would end like this as a hog #WPS https://t.co/onBolo6Bdx

The song is about the breakup of a relationship and includes the lyrics:

Leave me in the darkness

Never finish what we started

"I think the song 'Heartless' seemed like it fit right in for baseball season being over," Martin said. "I got a lot of good comments about it and a lot of people reaching out."

There were 75,200 views of Martin's video on his Twitter account as of Monday. On March 20, the Arkansas baseball Twitter accounted posted a video of highlights from the season accompanied by Martin's singing and guitar-playing, which had 86,700 views.

"I have to admit, when I first saw it pop up, I was like, 'What is going on with this?' " Van Horn said. "But then I thought, 'Well, he's not bad.' But who am I to judge somebody singing a country western song?

"Hey, I'm glad he's got some more talent in different things. He's a pretty good athlete, a great baseball player and plays the guitar ... and now he's singing a little bit. It takes a lot of courage to sing in public."

"I had no clue he played the guitar or sang," Thompson said. "I guess he's been hiding that under his hat from the coaches. But he's a talented kid."

Outfielder Heston Kjerstad and catcher Casey Opitz were among the teammates who knew about Martin's singing and guitar playing because they had roomed together.

"In our dorm room, he'd play every once in a while," Kjerstad said. "Maybe, like once or twice a week, he'd play his guitar when we'd be in there.

"I don't even think a majority of the team knew he played the guitar or sang, honestly. He never did it in the clubhouse or on road trips or anything. He just kind of kept that to himself or maybe when there were just a few of us in the dorm room.

"He has more music ability than probably anyone on the team because I don't know many guys who can play an instrument or even sing well."

Opitz roomed with Kjerstad and Martin as freshmen, then last year shared a house with Martin.

"I think that 90% of his time at home was him wailing on that guitar and singing at the top of his lungs in his room," Opitz said with a laugh. "He's got that old low-note soul, man. You can hear it when he sings.

"It's good that he finally came out of his shell and showed the world his true talent."

Martin said he was about 5 years old when he learned the to play guitar from his grandfather, Rick Massey.

"It just kinds of runs in the family, I guess. A lot of my cousins still play. Whenever I was 12 or 13, I started playing in our band at church. I played there for five or six years."

Martin helped Arkansas advance to the College World Series in 2018 and 2019. He is rated by Baseball America as the No. 27 prospect for Major League Draft, which will have its first 37 picks on June 10 with 123 more on June 11. The draft was shortened to five rounds and 150 picks this year.

"Playing the guitar and music and is a secondary thing I just love to do," Martin said. "It's just relaxing, stress-relieving."

"I'm probably the best at the drums," he said. "My dad played forever. We still have a set at our house he's had for a long time."

Martin said he had resisted suggestions from family members and friends to sing in a public setting.

"But finally I was like, 'I've got nothing to lose. Baseball is over. It's time to pick something else up for now until that starts again.' "

Martin said he's never considered seeing if he could turn his musical talent into a career.

"It's really just with family and friends," he said. "If baseball doesn't work out, maybe I'll try it."

Matt Jones of wholehogsports.com contributed information for this report