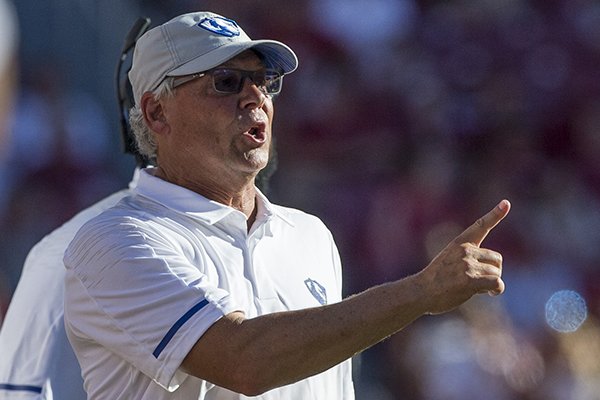 Eastern Illinois coach Kim Dameron is shown during a game against Arkansas on Saturday, Sept. 1, 2018, in Fayetteville.

After a year of being the senior defensive analyst with the University of Kansas football team, Kim Dameron realized how much he missed being a coach and how much he wanted to return to the sidelines.

The 59-year-old now has the opportunity to do it, and he will do so in his home state after he was named Fort Smith Southside's new coach during Monday's school board meeting.

"I found out in a hurry that I really loved coaching, not just being at a Power 5 school and breaking down offenses," Dameron said. "I'm excited about the opportunity to get there and get started. Being an analyst just isn't me. I'm a coach, and that's what I want to do. I want to be involved with kids. I want to mentor young people, and that's what I've done my whole life.

"I feel blessed, and God has blessed me in a big way. It drew me to come back home and come back to Arkansas. Fort Smith is a great town. I've never lived there, but it's a place I've gone in and out of since I was born."

Dameron, a former standout at Rogers who walked on at Arkansas and played four years as a wide receiver and defensive back, replaces Jeff Williams, who resigned to become the new head coach at Pea Ridge. He was chosen out of about 30 applicants for the job, according to Fort Smith Athletic Director Mike Beaumont.

Dameron now has the responsibility of leading the Mavericks in their return to the 7A-West this fall after Southside spent the last four years in the 7A-Central.

"The group we had assembled was meticulous in its search," Beaumont said. "This group went through one, two and three sets of interviews in its search, and we are excited to choose Kim Dameron as our new coach at Southside.

"We had a previous relationship at Ole Miss, but he told me that's not the reason he came here. He said Fort Smith has a great history, and there's a great legacy here. He wants to be at Southside, and we're excited about that."

Dameron joined Kansas Coach Les Miles' staff in March 2019 after spending the previous five years as the head coach at Eastern Illinois and compiled a 27-30 overall record and a 24-16 mark in Ohio Valley Conference games. The Panthers enjoyed three straight winning seasons from 2015-17 and earned a Football Championship Series playoff appearance and a No. 23 ranking in the final 2015 FCS coaches poll.

"I think I have a lot of experience," Dameron said. "I've taken teams into a lot of places that give me the ability to be calm in hostile environments. Then again, I don't think, and any stretch of the imagination, that my flame is burned out.

"I'm extremely excited about getting down there and getting ready to compete. That's what I've done my entire life. That's what I want to continue to do as long as I've possibly can."

Dameron, who is currently on furlough at Kansas, said he hopes to be in Fort Smith by mid-June so he can meet his new players and coaching staff.

Football players in Arkansas have been cleared by Gov. Asa Hutchinson to begin small group workouts, the first time since the mid-March sports shutdown in the covid-19 pandemic. Contact sports have not been cleared for full workouts.