PREP RALLY: BEST IN THE WEST: 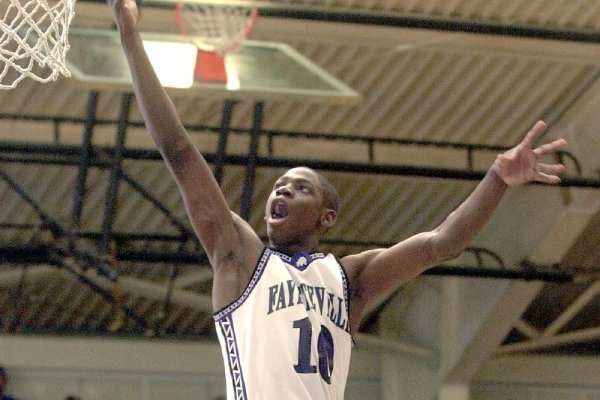 Fayetteville's Ronnie Brewer jumps above Rogers defenders as he attempts a layup during the first half in Fayetteville on Jan. 15, 2002. (Arkansas Democrat-Gazette/Jeremy Scott)

Basketball carried Ronnie Brewer all over the world as a high school, college and NBA player, and basketball brought him back home.

He could have chosen any number of cities to put down his roots after his playing days came to an end. But the draw of family and the color purple brought him back to Fayetteville, back to where it all started on the playgrounds of his elementary school.

"I lived all over the United States," Brewer said. "I've traveled all over to play, but there is no place like home. To me, there is nothing better than going to the Boys and Girls Club or AAO when you have some free time and see these little kids with dreams and aspirations of making it big. One of the main reasons I donate to the Boys and Girls Club and why I built that gym out there, these kids can see, 'OK, Ronnie Brewer played at Butterfield Elementary, he went to Woodland, he went to Fayetteville High School, he went to Arkansas.'

"It gives them a path that they can also see and say 'I can do that, too.'"

Before Brewer pulled on a Utah Jazz jersey or lockered next to Kevin Durant at Oklahoma City, he was just Ronnie, or little Boot. The son of Arkansas legend Ron "Boothead" Brewer Sr., stepped out of the shadow of his father to become one of the top prep basketball players in western Arkansas and the entire country.

As a senior at Fayetteville, Ronnie Brewer was a 6-foot-7 combo guard who could and often did play every position on the floor. The Razorback legacy was wooed by Kansas, Connecticut, Oklahoma State and others before he signed with Arkansas as a four-star recruit in 2003.

"It was tough to be honest," Brewer said of the college decision. "I really wanted to go to Kansas and play for Roy Williams. Then he left and went to North Carolina and they didn't have a scholarship available. So I had to look elsewhere ... UConn, Florida. UConn was too far, it snowed on my official visit. I asked them if they were still going to school and they just looked at me and started laughing.

"At Florida, it was going to be tough for me to go to a rival school in the SEC and have to play my home school. But Florida was rolling. Oklahoma State had Eddie Sutton and we had such a great relationship with him and his family and him and my dad."

He averaged 18 points and 6 rebounds per game as a junior before declaring for the NBA draft, where he was a first-round selection of the Utah Jazz, the No. 14 player selected overall.

Marty Barnes had a front-row seat for most of Brewer's career. The former Russellville and Rogers coach said Brewer was always a challenge to defend.

"He was just so explosive," Barnes recalled. "We did the best we could to keep him from getting to the rim. We played a matchup zone against him to try to keep him out of the lane. If he got the ball out on the break, you knew there wasn't much you could do to defend him.

"He was also a great defender. We always knew he was going to guard our best player."

Barnes did not coach Corliss Williamson at Russellville High School. He was the coach at Arkansas Tech in those days, but he likely was in the stands for many of Williamson's games as a spectator. Williamson later led Arkansas to the NCAA championship in 1994.

"When Corliss was coming through high school he was larger than life," Brewer said. "To me, he was the best player in the country. I would get mad when (Russellville) would play Fayetteville. Fayetteville would have really good teams but could not beat them. To be able to break that record was great."

Although Brewer has deep Fayetteville roots and purple runs through his veins, he also has ties to Fort Smith, where his father starred at Northside High School in the mid-1970s.

Ronnie said family reunions in Fort Smith at his grandmother's house was always trash-talk central between the Fayetteville Brewers and the Fort Smith Brewers.

"Oh man, that was a lot of fun," he said. "My dad was Northside, so he had that Grizzly pride. But I was his son at Fayetteville, so he loved the Bulldogs, too. Those were some great times when we all got together."

Eric Burnett grew up in Fort Smith watching the elder Brewer and Almer Lee lead Northside to a state title in 1974. He also coached against the younger Brewer when Burnett was the coach at Fort Smith Southside.

"You could see that Ronnie was a product of his dad," Burnett said. "Ron could shoot the basketball and was a really smart player and you could tell that he taught Ronnie the game of basketball because Ronnie was so smart with the basketball. He had guard skills, but he also had some post-up skills, too.

Burnett recalled a game at Southside against Fayetteville when he tried to have one of his post players guard Brewer.

"I thought it was a great idea since he was so tall to have a post player on him, a kid named Jason Sheppard," Burnett said. "He got Jason Sheppard in foul trouble in about three minutes. After Jason, I put a guard on him and he took the guard down and posted him up. He was just so smart and could play anywhere.

"You just had to pick your poison with him, and he could kill you with both of them."

Life has come full circle for Ronnie Brewer. After his professional career ended, he returned to Fayetteville and is now on the coaching staff at the high school with coach Brad Stamps and lifelong friend Nick Bradford.

Brewer has had a connection with Stamps since he was a seventh-grader at Woodland Junior High and Stamps was his coach. When Brewer was still in the NBA and Stamps was the head coach at Springdale High, Brewer would occasionally do the unthinkable -- give a motivational speech to the Red'Dogs' basketball team.

"As much as it hurt me to go talk to his Springdale players, I did it because of the respect I had for him," Brewer said, half-joking. "I would tell him every time, 'Man, this hurts me to do this.' But because of the person coach Stamps is and the man that he is, I'd do it for him."

Brewer is ready for the next chapter in his life. He has aspirations to be a head coach one day, perhaps at his alma mater across the road at Arkansas at some point.

Back at home and back in purple, he is right where he wants to be.

Brewer at a glance

CREDENTIALS Was named Mr. Basketball in Arkansas as a senior in 2003. … Broke Corliss Williamson’s conference scoring record as a senior at Fayetteville. … Averaged 25 points, 9 rebounds and 6 assists as a senior. … Was a 4-start recruit who signed with the University of Arkansas. … Was a two-time All-SEC selection at Arkansas. … Was the 14th overall selection in the 2006 NBA Draft by the Utah Jazz.

THAT’S WHAT HE SAID “I love Arkansas so much and there is no other place in the world that I would rather be than right back here at home.”